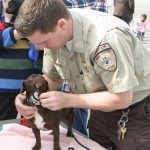 WASHOE COUNTY REGIONAL ANIMAL SERVICES NEWS RELEASE – Regional Animal Services will offer a free microchipping clinic on Saturday, April 13, at the Petco on South Virginia Street thanks to funding provided by Maddie’s Fund®. Area pet owners may have their pets microchipped for free from 10:00 a.m. to 3:00 p.m. inside the store located at 5565 South Virginia Street. Pet owners are asked to bring their dogs properly leashed and their cats in appropriate cat carries. The April 13 mobile clinic is part of a year-long campaign by Regional Animal Services to provide free microchips for all Washoe County pet owners.

Regional Animal Services Director Barry Brode said the free microchipping campaign was inspired by the large number of pets successfully returned to their owners thanks to microchips. The campaign’s goal is to microchip at least 5,000 pets by the end of January 2014. Brode said over 2,500 pets were microchipped in the first two months which he attributes to the enthusiasm shown to the campaign by caring and responsible pet owners.

“Anyone whose pet has become lost, even if it’s just for just a few hours, knows about the heartbreak and anxiety involved,” Brode said. “We believe microchips will help get lost pets home swiftly and safely and, based on the success of the campaign so far, a majority of the pet-owning public agree.”

To help reach that campaign’s goal, Regional Animal Services plans to hold mobile microchip clinics in neighborhoods throughout Washoe County during the course of the year. Maddie’s Fund has generously provided funding for all the microchips used at the mobile clinics during this free microchipping campaign as well as funding to cover the costs of holding mobile clinics on a weekend.

Future mobile clinics are scheduled for Tuesday, April 23, from 12 noon to 4:00 p.m. outside Dickey’s BBQ at 1650 Robb Drive in west Reno and from 12 noon to 4:00 p.m. on Tuesday, May 7, outside the Scolari’s at 1300 Disc Drive in Sparks. Locations and dates for future mobile clinics will be announced at WashoeAnimals.com as information becomes available. Free microchipping services are also available from the Regional Animal Services Facility on Longley Lane between the hours of 10:00 a.m. to 4:00 p.m., Monday through Friday, excluding holidays, through the end of January 2014.

Maddie’s Fund® (www.maddiesfund.org) is a family foundation endowed by Workday and PeopleSoft founder Dave Duffield and his wife, Cheryl.  Named after the family’s beloved Miniature Schnauzer, Maddie’s Fund is helping to achieve and sustain a no-kill nation by providing solutions to the most challenging issues facing the animal welfare community through Maddie’s® Grant Giving and Maddie’s Institute SM.