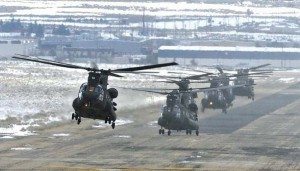 CARSON CITY — The Nevada Army National Guard’s 1/189th Aviation returned home today from a 10-month deployment in Afghanistan in support of Operation Enduring Freedom. The unit and their CH-47 Chinook helicopters were deployed as aviation support in Regional Command-South and Regional Command-East. The unit also includes Guardsmen from Montana.

The unit carried the Nevada flag to Afghanistan under command of Capt. Michael Bordallo of Reno. The unit has been operating out of Forward Operating Base Shank, with a few members working at Kandahar Airfield. The unit’s main duties have been support and combat air assault missions throughout Afghanistan.

An official welcome home ceremony is scheduled for late March.

In August 2012, one of the unit’s Chinooks was destroyed after suffering a hard landing during operations. No Guardsmen were seriously injured during the accident. The 1/189th is the same Nevada Guard unit previously known as Company D, 113th Aviation Company. Two Nevada Guardsmen were killed during the unit’s 2005 deployment to Afghanistan and this deployment marked its first return to combat.

The aircraft are set to return to Nevada in late spring.

The Nevada Guard still has about 170 airmen and soldiers deployed to Southwest Asia.