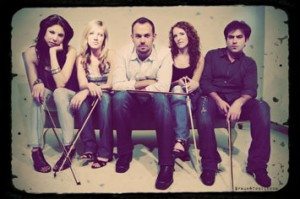 UNIVERSITY OF NEVADA NEWS RELEASE — Impeccably trained in the classics, the award-winning young string musicians of Sybarite5 also reveal eclectic tastes for excellence no matter the genre. Their reputation for redefining the rules of chamber mastery has gained the attention of such a mix of supporters as the Library of Congress, the CBS Early Show, his Holiness the Dalai Lama, the Aspen Music Festival and Carnegie Hall. Or, as Strings Magazine has written: “[Sybarite5] juxtaposing the likes of Stravinski with Radiohead or Dvorák with Led Zeppelin…doesn’t even begin to describe the range of their eclecticism or the depth of their repertoire.” According to The Sarasota Herald Tribune, “Their rock star status in the classical crossover world is well deserved. Their classically honed technique mixed with grit and all out passionate attack transfixes the audience…”

Sybarite5 will perform in Reno as part of the University of Nevada, Reno’s 2012-13 Performing Arts Series, Thursday, February 7 at 7:30 p.m. in Nightingale Concert Hall on the university campus. The first string quintet ever selected as a winner of the Concert Artists Guild International Competition in its 60 year history, the group is comprised of Sami Merdinian and Sarah Whitney, violins; Angela Pickett, viola; Laura Metcalf, cello; and Louis Levitt, bass. As a result of its 2011 victory at the CAG Competition, Sybarite5 made its Carnegie Hall debut in November 2012.

Individual tickets: Adult $24/ Senior $20/ Student and youth $12. To purchase tickets online, with a convenience fee, visit http://www.unr.edu/pas . Tickets also may be purchased in person, without a convenience fee, at Lawlor Events Center, 1500 N. Virginia St., Reno, lower level entrance, Monday through Friday from 10 a.m. to 5 p.m., and at the Church Fine Arts Building box office, one hour prior to performances. For more information, call 775-784-4ARTS.

The Performing Arts Series is presented by the University of Nevada, Reno School of the Arts and Extended Studies, who wish to thank these great supporters: The Associated Students of the University of Nevada and the Graduate Student Association; the Nevada Arts Council, a state agency; National Endowment for the Arts, a federal agency; the City of Reno Arts and Culture Commission; Western States Arts Federation; the Fulton Fund; the Edna B. and Bruno Benna Excellence in the Fine Arts Endowment; and Sierra Arts. Accommodations for guest artists have been provided by Circus Circus Hotel and Casino.