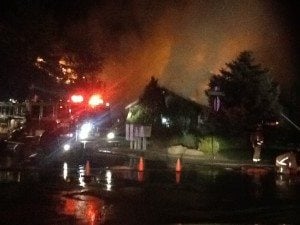 Three adults and two children were displaced by a fire at two homes on Brookview Circle Monday night. There were no injuries.

At approximately 11:46 p.m. September 3, Reno Dispatch received a report of a structure fire on Brookview Circle in Southwest Reno. Nine minutes after dispatch the first arriving Reno Fire Department units found one house engulfed in flames and another heavily involved. A total fire response was in place eleven minutes and 22 seconds after dispatch. In all,the response included a total of five fire engines, two ladder trucks, two Battalion Chiefs, one Safety Officer, one Chaplain, on Investigator and an air-suppy unit, for a total of 34 personnel. In addition, Reno Police, NVEnergy, REMSA and the Red Cross assisted.
“There were two structures with heavy fire involvement, and this was an outstanding effort by the firefighting personnel.” said Reno Fire Chief Michael Hernandez. “Although the buildings suffered damage, many items were retrieved, including a grand piano and other personal  items.”
Fire investigators have determined the most probable cause of this fire to be energized electrical wiring in the area of the fence separating the two properties damaged by the fire.