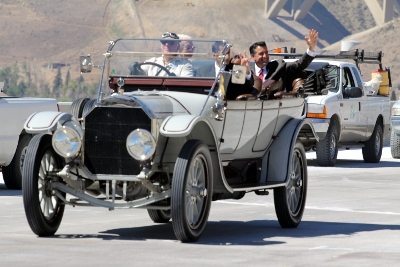 CARSON CITY – Gov. Brian Sandoval and a host of elected officials and dignitaries joined in dedicating the new I-580 freeway connecting the capital to Reno today, although motorists won’t get to drive on the 8.4-mile stretch of new roadway until mid-August.

The final piece of freeway linking the two communities cost about $575 million when all costs, including right-of-way acquisition, are counted and was begun nearly nine years ago during the term of the late Gov. Kenny Guinn. Ninety percent of the project cost was paid for with federal funds. Planning for the stretch of freeway dates back several decades.

Sandoval and daughter Marisa were passengers in a 1913 Pierce Arrow from Harrah’s Auto Collection for a short drive on a portion of the project.

Sandoval said Guinn and the late Sen. Bill Raggio, R-Reno, were instrumental in getting the project funded and into the construction stage. The two men were represented by their spouses, Dema Guinn and Dale Raggio, at the ceremony.

“This is a very important component on our state’s goal to become the No. 1 business area in the United States of America,” Sandoval said. “And so this is going to be a true, true asset in terms of moving products, moving people between Carson City and Reno and throughout Northern Nevada.”

It will also save lives by diverting traffic from Highway 395, where collisions have been a frequent occurrence, he said.

“This project is not just a home run, it’s a grand slam,” Sandoval said. 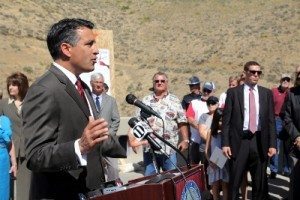 Susan Martinovich, director of the Department of Transportation, thanked all the people who helped bring the project to completion, including the state Transportation Board and the NDOT workers.

“This highway and the communicating back and forth is really going to be great for the region and I’m tickled to death that it’s here and that it’s open now,” he said.

Cashell said both Guinn and Raggio deserve credit for the project, because “without them this wouldn’t be here.”

The most impressive part of the project, which was built on the hills to the west of the existing Highway 395, is the 1,722-foot-long Galena Creek Bridge rising 300 feet above the creek below.

The four longest of the nine bridges needed for the freeway segment have automated de-icers imbedded in each bridge deck that will spray a “salt brine solution” (potassium acetate) automatically when the temperature is 32 degrees or below.

But the freeway has come in for some criticism, particularly from Southern Nevada residents who questioned the high cost of the project and why it was made a priority. Southern Nevadans have pointed out on more than one occasion that the transportation needs in urban Las Vegas far outweigh those elsewhere in the state.