Friends, family and political colleagues gathered Sunday to honor and pay tribute to the first woman to serve in Congress from Nevada, the now 91-year-old Barbara Vucanovich.

About 250 guests gathered at Rancharrah for the celebratory dinner, which not coincidentally raised a healthy sum for Republican candidates in the November general election.

Two successors in the 2nd Congressional District, U.S. Sen. Dean Heller and current Rep. Mark Amodei, joined in honoring Vucanovich, who was working for then-U.S. Sen. Paul Laxalt in 1982 when he urged her to run for the newly created seat. 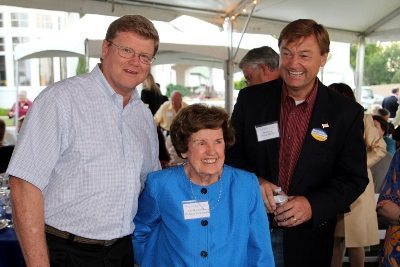 Vucanovich, 61 at the time, rose to the challenge and won the seat, serving for seven terms. She became good friends with President Ronald Reagan and other influential political leaders during her 14 years in office.

Heller, wearing one of Vucanovich’s old campaign buttons, said he first met her when he was visiting Washington, DC, more than 20 years ago. Heller called her office on the spur of the moment and Vucanovich offered to take him to lunch at the Congressional dining hall even though she did not know him.

“To this day, when people come out to Washington, DC, I take every opportunity, every chance that I can, to take them to the Congressional dining room, or the Senate’s dining room, and I tell them every time, the reason I’m doing this was because the first time I came to Washington, DC, Barbara Vucanovich took me to lunch,” he said.

Amodei, who took over representation of the district when Heller was appointed to the Senate in May 2011, said there are two remarkable facts about her service that stand out for him.

“One is, it was never about Barbara, which is a phenomenally rare thing in politics, and the other one was, Barbara Vucanovich served 14 years and came home, and that’s a rare thing that I think is really neat too –  one of the things I respect most about her,” he said.

Vucanovich took the lead on many issues affecting Nevada and helped line up support in the House of Representatives to create the Great Basin National Park in 1986, the only national park created in the contiguous United States during the Reagan administration. She was also instrumental in getting the 55-mile-per-hour speed limit repealed. 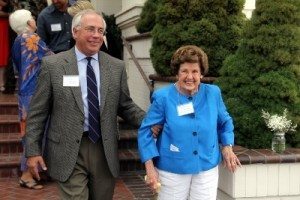 In an interview Friday, Vucanovich said she is dismayed at the sorry state of discourse and civility  in Congress, not to mention the inability of Republicans and Democrats to reach agreement on critical issues, including the budget deficit. But Vucanovich said she does not have a magic solution to change the political climate for the better.

“It’s kind of discouraging and it’s not good government,” she said.

Attitudes were different during her tenure, Vucanovich said.

“We would disagree in committee or disagree on various issues but when the day was over we patted each other on the shoulder and said, ‘nice day, how is your family.’ I know a lot of nice Democrats and we get along fine.”

“The president, of course, was Ronald Reagan, and although he had a Democratic Congress and so forth everybody liked him,” Vucanovich said. “And it was fine for me, he was there for six years so we were friends and I felt like it was very comfortable. And he was a friend with (House Speaker) Tip O’Neill. I mean they would have differences but then they would have a drink at night.”

Vucanovich has told her story in a new book, “Barbara F. Vucanovich – From Nevada To Congress, And Back Again.”

When she was elected, Vucanovich was one of only a handful of women serving in the House.

“It was different and there were very few women as I say, only 19 of us, and so we got to know each other,” she said. “A lot of us had differences of course, but we were always friendly to each other and it was a great experience.”

Vucanovich held many key roles during her tenure, including chairwoman of the very powerful Appropriations Subcommittee on Military Construction, only the second woman ever to chair an appropriations subcommittee at that time.

“If you are a woman running for office in Nevada, Barbara Vucanovich is the first endorsement you seek,” said Randi Thompson, a former legislative candidate.