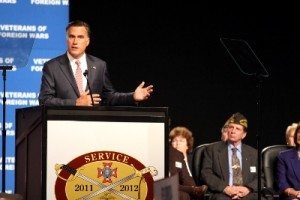 Presumptive GOP presidential nominee Mitt Romney went on the attack against President Barack Obama today in a speech to attendees of the Veterans of Foreign Wars convention here, criticizing him for national security leaks, weak foreign policy and a failure to seize on political opportunities in such countries as Iran.

Romney, speaking to the same group that Obama addressed on Monday, spent his 27-minute talk focusing on his foreign policy views and the need to maintain a strong military presence.

He called Obama’s first term a “time of declining influence and missed opportunity.”

The nation’s economy has not recovered, and at the international level, the world faces an increasing likelihood of a nuclear-armed Iran, Romney said.

“These clear measures are the ultimate tests of American leadership,” he said. “And by these standards, we haven’t seen much in the president’s first term that inspires confidence in a second. The president’s policies have made it harder to recover from the deepest recession in 70 years. Exposed the military to cuts that no one can justify. Compromised our national security secrets.

The audience at the Reno-Sparks Convention Center broke into applause frequently during Romney’s remarks. After his speech, Romney was set to leave on an overseas strip starting in London and including visits to Israel and Poland.

Romney criticized Obama for impending across-the-board budget cuts set to take effect for the military next year if a deal is not reached in Congress on a deficit reduction plan. The military would see funding cuts of $492 billion over 10 years, with an equal size cut coming to domestic programs. The cuts are the result of the failure of Congress in 2011 to come up with a deficit-reduction plan.

The cuts will weaken an already stretched Veterans Administration, and Romney said he will not let them take effect if elected president.

“This is no time for the president’s radical cuts in our military,” he said.

But Obama, in his remarks on Monday, noted that  most Republicans in Congress supported the automatic cuts, and he urged Congress to reach agreement on a deficit reduction plan. Obama has proposed eliminating tax cuts for the nation’s wealthiest residents as one way to help reduce the federal deficit and avoid the automatic cuts.

Some of Romney’s most blistering comments focused on national security leaks in the Obama administration. He called the leaks “contemptible.”

Sen. Dianne Feinstein, D-Calif., on Monday called for President Obama to stop the flow of information out of the White House.

“This isn’t a partisan issue, it’s a national security crisis,” he said. “It betrays our national interest. It compromises our men and women in the field. And it demands a full and prompt investigation by a special counsel, with explanation and consequence. What kind of White House would reveal classified material for material gain? I will tell you right now, mine will not.”

Romney also criticized Obama for congratulating Vladimir Putin for winning the Russian presidency in a “corrupt” election and for failing to take advantage of a public uprising in Iran that could have led to political reforms.

“That terrible misjudgment should never be repeated,” he said.

Romney also said the U.S. needs to do more to support Israel, its closest ally in the Middle East, and work with its allies to ensure Iran does not develop nuclear weapons.

“It’s a mistake, and sometimes a tragic one, to think that firmness in American foreign policy can only bring tension or conflict,” he said. “The surest path to danger is always weakness and indecision.”

Fire chief updates Board of Fire Commissioners on progress