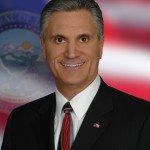 Washoe County Planning Commissioner and small business owner Vaughn Hartung has announced his candidacy for a seat on the Board of Washoe County Commissioners, District 4. The seat currently covers Sparks, Spanish Springs and Wadsworth.

In line with the needs of his district, Hartung voices his constant dedication to making Washoe County a premier place to live, work and play. Hartung is a 25-year small business owner and his approach emphasizes small and medium size business development as one component to revive Northern Nevada’s regional growth and provide expanded job opportunities.

Nearly 50 years ago Hartung’s family settled in Nevada, of which, 31 of those years are in Washoe County. Twenty-five of those years have fruited family and generated a strong sense of community in Spanish Springs.

Throughout the early ’90s, Hartung’s commitment as a community member in the active development of Spanish Springs continued with an appointment to the Spanish Springs Citizens Advisory Board in 1996. He served the board as secretary, vice chair and three terms as chairman, skillfully and diplomatically providing citizens with a voice in the future of Spanish Springs.

Hartung currently serves on the Truckee Meadows Regional Planning Commission, RTC Regional Road Impact Fee Technical Advisory Committee and the RTC Pyramid Highway Stakeholder Working Group. Additionally, he is a former member of the Washoe County Design Review Committee. Above all, Vaughn’s many years in citizen planning earned him a reputation for being fair, objective and unbiased in his decisions without conflicts of interest.

Vaughn and his wife Sandra have been married for 28 years and have two children who are alumni of the University of Nevada, Reno. As a former adjunct faculty member for TMCC and UNR, Hartung taught all phases of photography for nearly 20 years.

Vaughn’s current success is focused as an entrepreneur working on several business ventures and opening another photography studio. Hartung is an innovator who can bring a fresh perspective to bear on the serious issues facing the Washoe County Commission.

As a dedicated public servant, Hartung is committed to a shared regional vision of growth and development for Sparks, Reno, Washoe County and neighboring communities.