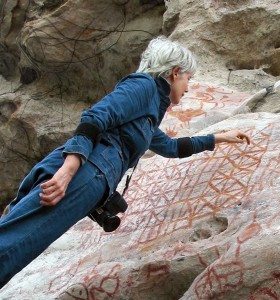 Amazon jungle expert to speak April 7 at the University of Nevada, Reno

The tropical rain forest of the Amazon region was not the vast uninhabited jungle wilderness envisioned by early archeologists, but has been a home to human populations for as long as 12,000 years, according to leading American archeologist Anna Roosevelt. She will give a talk at the University of Nevada, Reno on April 7 about her 30 years of adventures and research digging for the truth about the human history of Amazonia.

“It’s wonderful to be coming to Reno to lecture on my Amazonian research and also to have a chance to visit the renowned Nevada Paleoindian site “Spirit Cave” with scientists from the research team who discovered its significance,” Roosevelt said.

Her presentation is one of several brought to the community through the College of Science’s Discover Science Lecture Series.

“We’re honored to have her come to Reno and speak to the community,” Jeff Thompson, dean of the College of Science said. “One of goals with the lecture series is to bring world-renowned scientists to the community who can give a new perspective or show how science relates to us all.

“She’s someone who has fundamentally changed the ways we think of how people came to the Americas and shows how inventive humans are in creating environments to thrive in. She figured out how people made agriculture work in the Amazon to sustain large civilizations when everyone else thought it was a jungle wilderness.”

Roosevelt has been researching human evolution and long-term human-environmental interaction in the tropics since 1973, studying Paleoindians in the Amazon basin for much of that time. Her research has brought her to multiple sites along the Amazon, including such diverse places as urban excavations in Santarém, Brazil and to a wilderness site on the Curua River in the Xingu.

On a grant from the National Endowment for the Humanities, she discovered hunter-gatherer remains and cave paintings at Monte Alegre in the Amazon that were established as more than 10,000 years old. Her findings determined such things as tools they used and food they ate, and proved they were not big-game hunters as early theorized.

Roosevelt, a Fulbright Scholar, is a great-granddaughter of President Theodore Roosevelt and has earned a MacArthur Fellowship (also known as the genius award), an Explorers Medal, a Society of Women Geographers’ Gold Medal, a Bettendorf Medal from Santarém and the Order of Rio Branco from Brazil.

She currently directs the Lower Amazon Project in Brazil and the Congo Basin Project in Africa and is a professor in the Department of Anthropology, Field Museum of Natural History at the University of Illinois-Chicago.

Free parking is available in the three lots designated as “Silver 12” off Evans Avenue at Ninth Street on the south end of campus. Overflow parking is also available in the Brian J. Whalen Parking Garage on Virginia Street next to Lawlor Events Center.To access a campus parking map go to http://www.unr.edu/parking/documents/CAMPUSPARKINGMAP2010-2011ParkingFeeLocationsMap8.5x11_002.pdf.