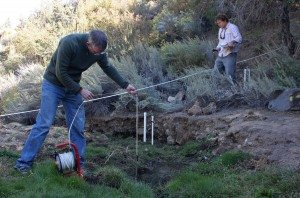 Mark Walker, hydrology professor at the University of Nevada, Reno, works with student David Moeser. They are taking measurements along Alum Creek in Reno as part of a research and class project testing the Truckee River’s tributary water so solutions can be proposed that can reduce loading contaminants into the Truckee River. Photo by Jean Dixon, University of Nevada, Reno.

University of Nevada, Reno researcher Mark Walker’s work in the Great Basin is earning him awards and taking him to unexpected places – places like Samoa.

Walker, a professor and chair of the University’s Department of Natural Resource and Environmental Science, received a 2010 Project of Excellence award from the U.S. Department of Agriculture and the National Institute of Food and Agriculture in January for his research testing unregulated water supplies in the Navajo Nation. The recognition has spurred a flurry of offers from numerous organizations inviting Walker to conduct research across the country and abroad.

“The Project of Excellence award has been helping me get involved in projects that I would have never been involved with otherwise, like this trip to Samoa,” Walker said. His project was profiled in the National Water Program’s annual publication.

Walker recently returned from Samoa, where he spent 10 days conducting research on the parasite leptospira and leading a workshop on preventing waste contamination of water supplies. Walker’s work strives to protect public health from potential toxins.

His research at the University of Nevada has focused on exposing and assessing the health risks of water contaminants such as arsenic, E. coli, leptospira and cryptosporidium. The research he conducts away from the University is brought back to his classroom and taught to his students, who have the opportunity to analyze and sometimes participate in Walker’s research.

In his research at the Navajo Nation, Walker tested unregulated water for a range of contaminants. Although the Navajo reservation is connected to several public water supply lines, the reservation’s rural areas often pump water from untreated wells.

“There’s often no alternative water supply for some of these Navajo households in rural areas,” Walker said. “Even if it’s not safe for human consumption.”

To test the supplies, Walker and University of Nevada students collaborated with faculty and students from Dine College, the Navajo Nation’s community college. Students from both institutions split into small groups to collect samples, measure characteristics and inspect sites.

Walker’s teams sampled nearly 100 wells, finding that the water supply exceeded the federal standard for arsenic, uranium and fluoride, and that 15 percent of the samples were contaminated with E. coli. Walker’s reports helped the Navajo Tribal Utility Authority decide to close some of the unregulated wells.

“We were able to identify areas where people didn’t have access to safe water supplies and help start looking for solutions,” Walker said.

The establishment of those links between different communities is part of the reason Walker’s work was honored as a Project of Excellence. The National Water Program, which receives funding from the U.S. Department of Agriculture and the National Institute of Food and Agriculture, recognizes projects which show how water resource professionals in American universities and colleges work with citizens, communities and partner agencies to address critical water resource problems across the United States.

Walker, whose department is in the College of Agriculture, Biotechnology and Natural Resources, has participated in similar work throughout northern Nevada. He spent years in Churchill County testing private wells. People who get water from private wells often have no idea of whether the water is safe to drink and Walker’s work was designed to raise awareness about chemicals, such as arsenic, that are commonly found in Nevada’s groundwater.

He has also tested water at the Caughlin Ranch community in Reno with his University of Nevada classes, giving students the opportunity to practice what they study in his Principles of Ecohydrology course. Walker is currently working on adding a wireless sensor network to Caughlin Ranch’s Alum Creek to collect data on factors like wind speed, wind direction and soil moisture to help the homeowners association determine where to reduce its water use.

Walker and his students will return to the Navajo Nation for the fourth summer this June to continue testing unregulated water supplies.