And, what Judas Priest and Sharron Angle have in common

Sooner or later a case like this will win. It’s just a matter of time. It’s always tough when you do a new thing, but this case will not be new five years from now. Everyone will know then that music like Judas Priest’s causes violence and death among young people.

Arizona has been considered a progressive state because it provides the vast majority of mental health services through cost-effective outpatient community programs. By slashing these programs, experts say the state will force more people to use emergency rooms or end up in the criminal justice system, which will cost the state more. 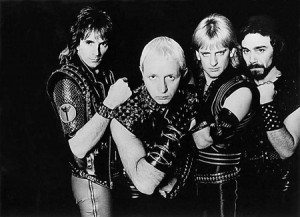 It occurs like clockwork. After mass gun slayings in America, discussion immediately turns toward proximate causes.

Kip Kinkel’s shootings were attributed to news coverage of other school shootings, Shakespeare and Marilyn Manson. Post-Columbine, Marilyn Manson and violent video games were criticized. And after Virginia Tech, the video game “Counter Strike” was blamed. (Although Seung-Hui Cho likened himself to Jesus, there weren’t many who publicly blamed religion for his acts.)

As cause-seeking beings, humans engage in inherently fallacious thought, especially in the height of the moment, so attributing gun violence to any single cause, however abstract, is bound to fail both in the court of public opinion and the court of law.

Reno attorney Ken McKenna experienced this when he sued Judas Priest and lost in 1990. He tried to blame subliminal messages in Judas Priest songs for the death of Raymond Belknap, 18, and James Vance, 20, his partner-in-suicide who died later from drug complications.

As most undergraduates learn, causal links are extremely difficult to prove. Correlations are more readily observable, but confounding variables invariably creep in to explain such relationships.

The tendency to lay blame, in the latest instance of gun violence in Tucson, Ariz., on salacious political rhetoric, which is clearly designed to incite a specific constituency, also fails the causal test. After the Virginia Tech shootings of 2008, changes were enacted to the federal Family Educational Rights and Privacy Act. But such policy improvements could not prevent what occurred in Tucson last week, despite alleged shooter Jared Loughner’s brushes with community college police and interventions by college counselors.

In this case, violence-based political rhetoric and gun accessibility both fail as potential ultimate causes for Loughner’s behavior. At the same time, one could also make the case that lack of access to adequate mental health services helped contribute to Jared Loughner’s violent and bizarre behavior. It would be a stretch to do so, however.

But it would be more contextually accurate for talk shows, bloggers and media personnel to emphasize one common variable with many incidences of gun violence — mental illness – rather than Sarah Palin’s or Sharron Angle’s violence-laden political rhetoric.

It is a confluence of factors – heritability, environmental variables (of which access to guns and violent stimuli are but two), familial influences and substance abuse – that contribute to mental illness, traits of which, such as signs of depression or attempts at suicide, many mass shooters tend to share.

Combined, these influences on mental health are nowhere near as sexy and convenient for laying blame, or for fulfilling talk-show minutes, as did recent discussions about specific political candidates or increased gun control.

Media instead prefer to distract from the more salient issues, in part because it’s easier to recycle story topics once they become popular, and in part because newsrooms are less willing and able to put time and money into providing context for topics that are more difficult to tackle; that is, assuming reporters and editors are informed enough to look in less obvious directions in the first place.

A consequence is that such news coverage distracts from very real issues, such as state of mental health care, stigmas against mental health conditions and access to adequate treatment. Diversion onto political figures is much easier and cheaper for pundits and reporters. One result is a mass-media-based discussion that misses the mark and perhaps even contributes to the kind of rhetoric that is being criticized in the first place.

[Edit 01/16/11: The Las Vegas Sun has an article today about improving the mental health system after the Tucson tragedy. Also, the New York Times has an opinion piece about how Tucson was covered, featuring a pointed quote by a Max Etchemendy of Calif.: “If I were a reporter on this story, my very first call would have been to a mental health professional willing to consider the nature of Mr. Loughner’s illness. The ‘political’ angle has been beaten to death, and ‘medical’ angle has been ignored completely.”]