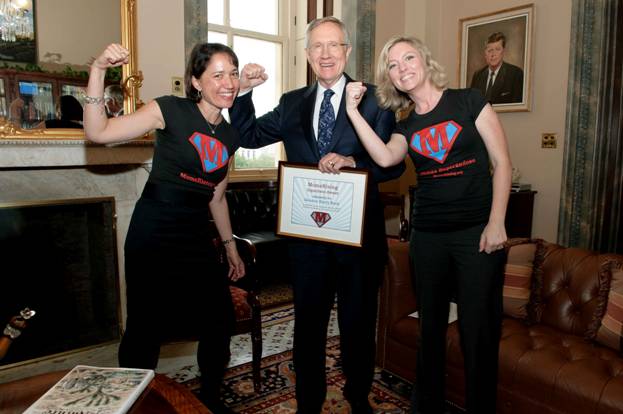 WASHINGTON, D.C.—Sen. Harry Reid today was honored by MomsRising, an advocacy group of mothers, for his leadership in passing health insurance reform.

MomsRising has more than 3,000 members in Nevada that advocate for more family friendly policies including better access to health care and paid sick leave, especially for working mothers. Reid was presented with the MomsRising “Superhero” award by Donna Norton, national campaign director, and Kristin Rowe-Finkbeiner, executive director of MomsRising.

“American families are struggling with the high cost of health coverage. Too many parents in Nevada were faced with terrible choices to provide their children with the health services they needed,” said Reid. “The Patient Protection and Affordable Care Act will provide relief to those families. Thirty-one million more Americans will have coverage under the new law, and those with coverage will pay less for more services. This year, insurance companies will no longer deny coverage to children with pre-existing conditions and many parents will be able to keep their children up to age 26 on their policies. And this is just the beginning. Nevada families will have more affordable options and better access to care. I thank MomsRising for this award and for their tireless work on behalf of Nevada’s mothers and their children.”

“Senator Reid took a strong and principled stand for moms, dads and kids all across this country when he decided that health care reform would become law and would be a win for kids and families,” said Kristin Rowe-Finkbeiner. “His commitment to America’s families and his efforts to get this crucial legislation through the Senate were super-heroic and, frankly, almost super-human. We are proud to honor him with this award on behalf of our thousands of members in Nevada and our more than one million members nationwide.”

Now is no time to rein in health care costs,...

Nevada can honor heroes, protect families’ health and safety with...