By Sean Whaley, Nevada News Bureau: Nevada is one of 35 states getting a D grade or lower for failing to protect the public from aggressive asset forfeiture efforts by law enforcement, a process called “policing for profit,” according to a study released this week by the Washington, DC-based Institute for Justice.

Nevada received a D- for the public protections in its civil forfeiture law, a C grade for efforts by law enforcement to evade state protections by partnering with the federal government to seize assets, and a D+ grade overall.

The Institute for Justice notes that under state and federal civil asset forfeiture laws, law enforcement agencies can seize and keep property suspected of involvement in criminal activity. Unlike criminal asset forfeiture, however, with civil forfeiture, a property owner need not be found guilty of a crime – or even charged – to permanently lose cash, car, home or other property.

“Nevada forfeiture law provides paltry protection for property owners from wrongful forfeitures,” the report says. “The government may seize your property and keep it upon a showing of clear and convincing evidence, a higher standard than many states but still lower than the criminal standard of ‘beyond a reasonable doubt.'”

The Nevada analysis shows that the state law puts the burden on the property owner to show the act leading to the forfeiture process was done without the owner’s knowledge.

“Additionally, the revenue must be spent within the year, because any excess more than $100,000 in a forfeiture account is given to local schools,” the report says. “This provision creates an incentive to rely on new forfeitures each year.”

Allen Lichtenstein, general counsel of the ACLU of Nevada, said the group has had major concerns with the issue of civil forfeiture for a long time and for the very reasons identified in the report.

Shifting the burden to those who have had property seized, for example, to show innocence, and the “eat what you kill” concept where law enforcement benefits financially from using the forfeiture process, are both concerns, he said.

The report should be of interest to anyone, “concerned about civil liberties and the due process of law,” Lichtenstein said.

Only three states – Maine, North Dakota and Vermont – earned a grade of B or better. Maine earned the highest grade, an A-, largely because all forfeiture revenues go to the state’s general fund, not directly into law enforcement coffers.

The Institute for Justice, in what it is calling the first-of-a-kind national study on civil forfeiture abuse, titled “Policing for Profit: The Abuse of Civil Asset Forfeiture”, called the process “one of the worst abuses of property rights in our nation today.”

“The report finds, not surprisingly, that by giving law enforcement a direct financial incentive in pursuing forfeitures and stacking the legal deck against property owners, most state and federal laws encourage policing for profit rather than seeking the neutral administration of justice,” the Institute for Justice said in announcing its findings.

“Americans are supposed to be innocent until proven guilty, but civil forfeiture turns that principle on its head,” said Institute for Justice Senior Attorney Scott Bullock, a co-author of the report. “With civil forfeiture, your property is guilty until you prove it innocent.”

The report notes that asset forfeiture is growing across the country.

For example, in 2008, for the first time in its history, the U.S. Department of Justice’s forfeiture fund topped $1 billion in assets taken from property owners and made available to law enforcement. State data reveal that state and local law enforcement also use forfeiture extensively: From 2001 to 2002, currency forfeitures alone in just nine states totaled more than $70 million.

In Nevada, the amount of money from seized assets returned to the state from the federal government continues to grow. The report shows that Nevada received $1.2 million from the Asset Forfeiture Fund in 2001. That grew to nearly $4 million in 2008.The report says the numbers reflect both criminal and civil seizures, although most is likely from civil forfeitures. 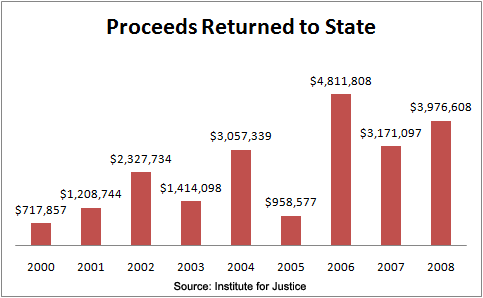 The report says the use of this process, called “equitable sharing,” encourages abuse by states in evading their own civil forfeiture laws.

With equitable sharing, state law enforcement can turn over seized assets to the federal government, or they may seize them jointly with federal officers. The property is then subject to the federal forfeiture law, not the state law.