Women workers of the US Mint presentation 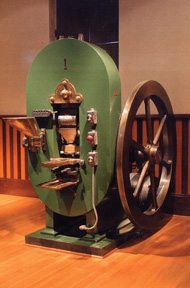 Coin Press No. 1 at the Nevada State Museum which operated originally as a US Mint.

SUBMITTED NEWS RELEASE Carson City, Nev. — Since the U.S. Mint began operations in 1792 women workers have played an important role in producing American coinage. Curator of History Bob Nylen will give the special presentation “Women Workers of the U.S. Mint” at the Nevada State Museum Saturday, January 23, 2010 at 10:00 a.m.

The program will focus closely on the women workers at the Carson City U.S. Branch Mint.  The mint operated for 23 years as a U.S. Mint and women workers assisted in the production of millions of dollars in both gold and silver coinage. Their significant role in the U.S. Mint’s operation has been overlooked by historians.  The program is an opportunity to learn about their unique role in the mint’s system and to pay tribute to their significant contributions to our Nation’s coinage.

The first two women hired by the U.S. Mint were assigned the task of adjusting silver and gold blanks to ensure they were the proper weight before being minted into coins.  As operations grew at the Philadelphia Mint and with additional branch mints added the number of women increased.  Today, the U.S. Mint has over 500 women working in varies jobs throughout the system.

The Nevada State Museum actively engages people in understanding and celebrating Nevada’s natural and cultural heritage.  Exhibits highlight the state’s history, geology, plants and animals, Native American cultural heritage, Historic Carson City Mint, a replica walk-through mine, and ghost town.  Current changing exhibits include Rock Art Perspectives: Petroglyphs and Pictographs, Slot Machines: The Fey Collection and The Art of Nature: Images from the Wildlands of Nevada.  Due to mandatory state budget restrictions, the museum is closed Sunday – Tuesday, and open from 8:30 am to 4:30 pm, Wednesday – Saturday.  Please enter through the Dema Guinn Concourse. Admission: $6 for adults, $4 for seniors, and free for members and children under 18.  For information, call (775) 687-4810.

The Nevada State Museum is one of seven managed by the state Division of Museums and History, an agency of the Nevada Department of Cultural Affairs. The Department serves Nevada’s citizens and visitors through cultural and information management, presentation and promotion of cultural resources, and education. The Department also includes the State Office of Historic Preservation, Nevada State Library and Archives and the Nevada Arts Council. For more information, please call Teresa Moiola at (775) 687-8323 or visit the department’s website at www.NevadaCulture.org.