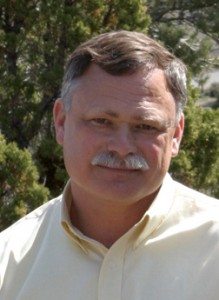 Ed Smith of University of Nevada Cooperative Extension’s Living With Fire program has been awarded a Silver Star from Truckee Meadows Tomorrow.

Smith, a natural resource specialist with UNCE, earned the award for his efforts to teach homeowners living in high-fire areas how to protect their property from wildland blazes.

Truckee Meadows Tomorrow is a nonprofit group that measures and reports on the quality of life in the Truckee Meadows according to various parameters. Smith was recognized for his efforts to improve an indicator called “Perception of Safety.”

Smith and other award winners were honored at the group’s Accentuate the Positive Awards Luncheon from today (Oct. 9) at the Peppermill Tuscany Ballroom.

Earlier this year Smith, and Sonya Sistare, the coordinator for the “Living With Fire” program, were awarded a bronze Smokey Bear award for their campaign “Wildfire – It Only Takes A Spark,” a multi-year effort to reduce wildfires caused by equipment. Smokey Bear award winners are chosen by the National Association of State Foresters, the U.S. Forest Service (USFS) and The Advertising Council. A maximum of 10 of the bronze awards are handed out annually across the country.

This year, the Living With Fire program has been asking homeowners to “Be Ember Aware” and to clean up areas of their homes where windborne embers from advancing wildfires can alight and then ignite. These places include wood shake roofs and clumps of debris such as pine needles that can settle on roofs, gutters and porches. Embers, carried as far as a mile ahead of an advancing wildfire, are the most common reason homes are lost in wildfires, Smith said.

There are more than 250 communities in Nevada at risk from wildfires and 68 are at extreme or high risk.

Smith has been involved in wildfire issues for more than 20 years, and was instrumental in creating the Nevada Fire Safe Council to help make homes, neighborhoods and communities fire safe.

Smith has also produced teaching materials used around the country to help homeowners take steps to protect their homes from wildfire. More than 2 million copies of his “ Living With Fire” homeowners’ guide have been printed, and the publication is used in 14 states and Canada. Living With Fire products are the most widely used wildfire threat-reduction education materials in Nevada.

‘Coffee With Friends’ class: Homeowners urged to Be Ember Aware

Which one is the weed? New online game helps you...