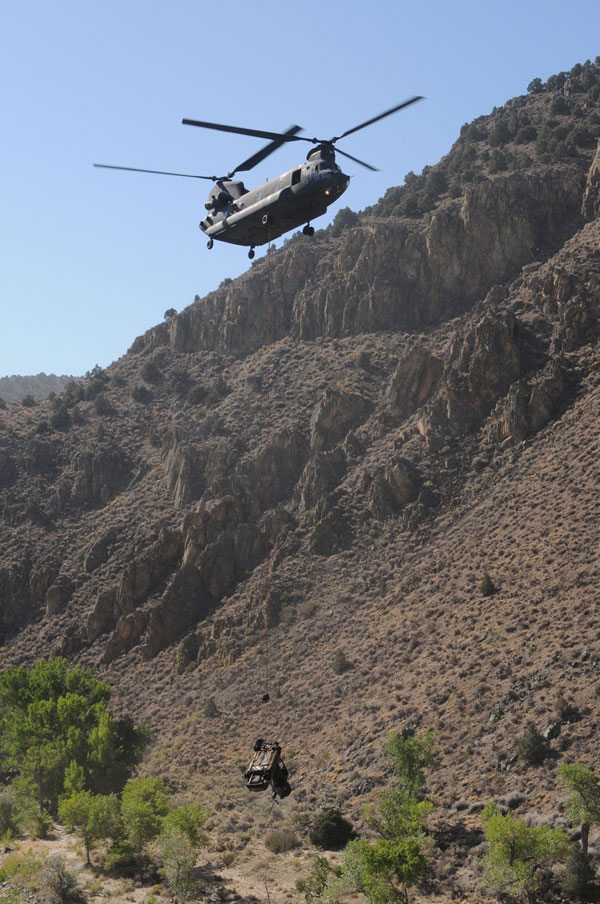 CARSON CITY – The Nevada National Guard used a helicopter training exercise Friday to airlift rusty junk cars from the Carson River that have lurked for years below the water surface, threatening the safety of whitewater rafters, kayakers and marring the river’s natural beauty.

A CH-47 Chinook helicopter flew over several miles of the river downstream from the Deer Run Road Bridge and plucked out 20 vehicles illegally dumped in the river that could not be removed from shore. The aircraft deposited the cars at an onshore site to be hauled to the dump.

“Removing the cars was a difficult exercise, but they couldn’t have been pulled out any other way and we love being able to help out our local communities.”

“This project gave the Guard an unusual opportunity to fulfill our requirement for aircraft slingload training while also making the river safer for people to enjoy,” said Chief Warrant Officer Sean Laycox, an operations officer for the Army Aviation Support Facility in Stead. “Removing the cars was a difficult exercise, but they couldn’t have been pulled out any other way and we love being able to help out our local communities.”

The Guard removed the junk cars without charge to Carson City, accomplishing a task that was prohibitively difficult and costly for local government to undertake. Division of State Lands agent Rick Murray, who arranged for the removal project, said private helicopter companies would have charged $8,000 to $10,000 an hour to remove the cars. The National Guard has an innovative readiness program that allows them to use federal training dollars to increase their mission readiness, while performing select community service projects. State Lands has authority over river bottoms and banks to the normal high water mark.

“Carson City has tried for years to find a way to get those horrible junk cars out of the river before they caused a boat wreck that hurt or killed someone,” Carson City Supervisor Pete Livermore said. “The National Guard has performed a valuable community service that has removed dangerous objects and restored the river’s natural beauty, and we are very grateful.”

Removal by helicopter was the only way to get the cars out of the riverbed, where many had lain for years, oozing contaminants into the water and filling the rusted bodies with heavy sediment.

“In the spring, when river flows are at their highest, junk cars below the surface expose whitewater rafters and kayakers to an invisible hazard that could rip apart their boats and trap them in swirling fast-moving water,” Ed James, general manager of the Carson Water Subconservancy District, said.

The Carson River Regional Recreation Steering Committee, organized by the Nevada Commission on Tourism, works on projects to make the Carson River safer and more accessible for recreational boating. Examples include a boat launching ramp, paved parking, and restrooms that Carson City is building at the Morgan Mill Road river put-in area and parking and restrooms in Dayton at the Santa Maria Ranch subdivision boat take-out area.

Local Sagebrush Chapter of Trout Unlimited announces beginning of the...

Opinion: Back Country Horsemen set a quiet but stunning example...