By ThisIsReno March 11, 2013
University of Nevada, Reno debaters Kelly Brill and Jonathan McGuire are ranked 11th in the nation as a collegiate parliamentary debate duo. The University hosts one of the two national tournaments, the National Parliamentary Tournament of Excellence, March 18-20. 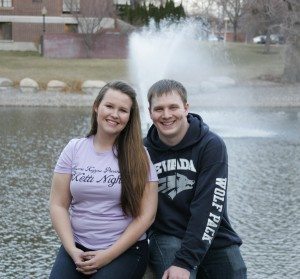 University of Nevada, Reno debaters Kelly Brill and Jonathan McGuire are ranked 11th in the nation as a collegiate parliamentary debate duo. The University hosts one of the two national tournaments, the National Parliamentary Tournament of Excellence, March 18-20.

The University of Nevada, Reno will play host March 18-20 to the National Parliamentary Tournament of Excellence, the first of two national tournaments which will determine the country’s collegiate parliamentary debate season winners. Ranked eighth in the country as a team overall, University team captain Jonathan McGuire has high hopes for a strong finish.

“Having the tournament here on campus is great,” he said. “There is a huge home-field advantage.”

His debate partner, Kelly Brill, agreed, “We know the campus and can get to our next competition rooms easily and quickly. And, it’s really nice to debate in a familiar place.”

Free and open to the public, the tournament is headquartered in the Schulich Lecture Hall, with debates also occurring in several adjacent buildings. University President Marc Johnson is especially excited to see the tournament come to campus and will be attending the final debate and awards ceremony.

“Debate was my sport, so to speak,” he said. “I really enjoyed it. It’s terrific what our student debaters and Coach Sharp have achieved, and I’m thrilled that they’ll get to compete here, on their home court. We’ll all be rooting them on, for sure.”

McGuire, a junior, and Brill, a sophomore, are ranked 11th in the nation out of 864 debate duos. It is that ranking that earned the duo an invitation to the National Parliamentary Tournament of Excellence, which is akin to the NCAA basketball tournament – only the top-seeded 62-64 collegiate parliamentary debate duos in the country are invited to compete. A second team from the University also got a bid this year, freshman Steven Kish and sophomore Cory Nims, who are currently seeded 40th.

Both duos hail from local high schools. McGuire, Brill and Nims competed on the nationally competitive Reno High debate team and Kish competed at Galena High. Having competed in both his freshman and sophomore years, McGuire is the only one of the four to have competed in this tournament before.

“It’s a marathon, not a sprint,” he said. “You have to keep that in mind. You can’t let yourself get worn out. It’s pretty grueling.”

Phil Sharp, the team’s coach and the University’s forensics director in the College of Liberal Arts, said Brill is a persuasive and strategic debater. “She sees the whole game board while McGuire is a fast debater, with strong arguments and a very high technical ability,” he said. “When we put them together as debate partners this year, we found their styles were very complimentary. They have a good chemistry.

McGuire and Brill attribute some of their debate success to their dating relationship as well as the support from their coach. “Coach Sharp has done a fantastic job. He truly wants us to be the best we can be, and he pushes us,” Brill said. “He isn’t easy on us. That’s what makes us get better.”

Debate team coach since fall 2008, Sharp has built upon the team’s already strong national reputation. His first season at Nevada he coached the University’s team of Max Alderman and David Pena to an unprecedented first place in both of the national tournaments. In each of the subsequent three years, the University has had at least one duo finish in the top-10 of one of the national tournaments. Overall, as a team, Nevada finished last season ranked 18th in the country.

The National Parliamentary Debate Association’s Championship Tournament, the second national tournament to finish the collegiate debate season, will be held at the University of the Pacific in Stockton, Calif. This is the more “open” tournament where 150-200 debate duos compete including at least three duos from the University. The University’s debate team is ranked eighth for this tournament also.

For more information on the National Parliamentary Tournament of Excellence to be held on the University of Nevada, Reno campus March 18-20, contact Sharp at [email protected] or 360-747-2944. Sharp encourages the community to come enjoy the tournament and support the home team.