Students pledge to act responsibly and not drink and drive

University partners with area restaurants, bars and clubs to “do the ride thing,” rewards designated drivers 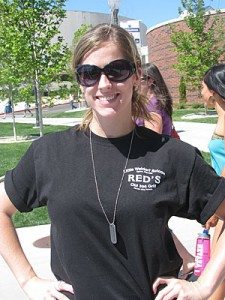 Kristine King, student specialist for programs for underage drinking laws in the Office of Student Conduct, wears wolf tags given to students who pledge be a designated driver.

The endeavor to deter underage and binge drinking takes a concerted year-round effort, but more so this time of year as students celebrate the beginning of the semester with new and old friends and get excited for the first home Nevada Football game this Friday. With help from Join Together Northern Nevada and participation from a new community coalition group, the University of Nevada, Reno’s Office of Student Conduct is taking on the challenge.

“Get ‘wolf tagged,’” said Graduate Student Charlene Rigdon, coordinator of the “Do the Ride Thing” campaign, a University-sponsored reward system for designated drivers who choose not to drink and drive. “All you have to do is wear your wolf tags into a participating bar to get rewarded and win cool prizes.”

Students receive free, serial-numbered “wolf tags” after signing the Wolf Tag Pledge to act responsibly and appropriately at all times when wearing the wolf tags and to encourage others to use a designated driver when drinking.

The next Wolf Tag Pledge event is Thursday, Sept. 30 in front of the Mathewson-IGT Knowledge Center and starts at noon. Students can also get wolf tags by going to the student conduct offices located in the bottom floor of the Clark Administration building on campus.

“We want more students to join the 600 other students already pledged to not tolerate irresponsible drinking,” Rigdon said.

Local retailers participating in the campaign, which currently include the Little Waldorf Saloon, The Breakaway, the Wolf Den, Divine, Studio on 4th, The Isles and the Pub N’ Sub, show a commitment to deter underage and abusive drinking in their establishments. Free training is offered to participating bars to help servers recognize a sober driver wearing the wolf tags and offer incentives and prizes, such as free soft drinks, discounts on food and raffle prizes.

“We want to focus on limiting access of alcohol to underage students,” Rigdon said. “Having the support and working collaboratively with local bars and clubs helps send the same consistent message to youth and to deter underage drinking.”

Also, every Friday students wearing the wolf tags receive 10 percent off at the on-campus Starbucks or Kèva Juice. Other campus vendors are being asked to participate and “Safe & Sober” events are in the works.

Last month, the City of Reno Ward Four Northeast Neighborhood Advisory Board (NAB) and the Ward Five Old Northwest NAB awarded Join Together Northern Nevada each with a $750 gift from the Community Pride Grant to be used for the University campaign. JTNN is a coalition of concerned citizens working to address the growing substance abuse problem in Washoe County. The coalition helps to build successful partnerships to create healthy, drug free communities. The money will help purchase teaching materials and equipment for the project.

In addition to the “Do the Ride Thing” campaign, the Office of Student Conduct will continue to work with the University and Reno police departments with increased “BASICS” enforcement of drinking laws around the campus and surrounding neighborhoods throughout the semester. The BASICS program, or Brief Alcohol Screening and Intervention of College Students, began during the spring 2008 semester. The program is aimed at helping students reduce risky behaviors and harmful consequences of drinking during a two-session alcohol assessment and education program in a judgment-free environment.