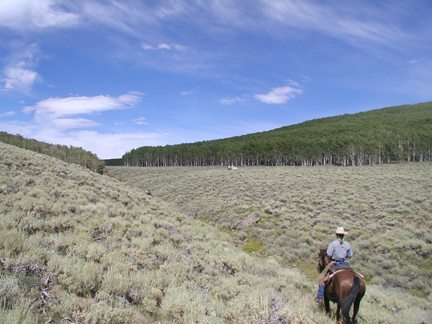 Sagebrush rangelands have supported cultures and wildlife in the arid West for millennia, yet today, those same ranges of grassland are echoes of what they were.

The complex network of native grasses and wildflowers sustains thousands of species across millions of acres, from burrowing owls and pygmy rabbits to pronghorn antelope and mountain lions. Many species, like the greater sage-grouse, can survive nowhere else.

Large-scale destruction, however, has wiped out half of sagebrush rangelands since the accelerated arrival of European settlers in the 1800s, according to a new report released by the U.S. Geological Survey and other federal agencies.

A team of scientists from a dozen organizations are now betting that innovations in remote sensing can help land and wildlife managers restore and conserve the imperiled grasslands.

Their research culminated in a report that identified healthy and degraded sagebrush land-cover spanning more than 165 million acres of sagebrush ecosystem across 13 western states – a scale unmatched by previous mapping efforts.

The report “points squarely at the primary threats driving the loss and degradation of our sagebrush ecosystem,” said Jeremy Maestas, a Natural Resources Conservation Service researcher specializing in sagebrush ecosystems and a life-long Nevadan.

“It’s breakthroughs in technology that have allowed us—for the first time—to look at the entire landscape across the whole west and see how it’s been changing through time,” Maestas said. “Big data has come to the West.”

In the report, scientists laid out a broad strategy called “The Sagebrush Conservation Design” that focuses on first protecting intact and functioning sagebrush ecosystems or “cores,” and then working outward to improve the management and restoration of more degraded landscapes.

“We’re flipping the script on how humans normally deal with problems,” said Maestas, a contributor on the report. “Most of us wait until there’s something wrong to go to the doctor. Sometimes we end up in the emergency room, but if you wait that long, it’s hard to recover. We know in medicine that it’s more effective to get annual checkups, be preventative, and get on the problem before it spreads.”

Among the rangelands analyzed, 33.4 million acres or about 14% were classified as “core” sagebrush areas, meaning they are most likely to maintain their condition as high-quality habitat.

“We need to shore up our best habitats and make sure we’re not getting flanked by these threats. Once we’ve done that, we can expand them through restoration and ultimately grow the amount of healthy sagebrush land that we have,” said Maestas.

Another 84.3 million acres or 34% of sagebrush habitat was classified as “growth opportunity areas,” lower-quality habitat due to landscape-wide threats like invasive grasses. Researchers say these lower-quality habitats show potential for growth and improvement, but under the “defend and grow the core” strategy, they would be a lower priority.

About half of sagebrush rangelands examined by scientists—127.2 million acres — were so degraded they no longer function as habitat for sagebrush dependent wildlife, according to the study.

Researchers found that sage-grouse populations in these highly degraded areas declined by more than 45% and now account for just 9% of the 2019 population. Sage-grouse breeding grounds known as “leks” were also sparse in such areas, accounting for only 14% of the 4,478 leks examined for the study.

“Once you break Humpty Dumpty it’s hard to put him back together again,” said Maestas. “These are ecosystems that are dry, precipitation is erratic, so if we’re trying to plant native seeds back it’s extremely unpredictable, hard, and costly.”

Over the last two decades, only “core” sagebrush habitats experienced growth in the sage-grouse population, having increased by nearly 16%, and now represent more than half of the total population. About 40% of leks were also located in core sagebrush habitat.

Lower-quality sage-grass habitats or “growth areas” had nearly as many leks as core habitat (38%) but also saw a 25% decline compared to their 1996 population count, accounting for 31% percent of the population in 2019.

New innovations have allowed the U.S. Geological Survey to see the sagebrush rangelands in more detail, said Lief Wiechman, who leads the sagebrush portion of the land management research program for the agency. Maintaining a functioning ecosystem will require proactive ecosystem management of all factors driving biome-wide collapse.

“By losing these large intact habitats we’re seeing impacts on wildlife habitat, recreation opportunity, water quality, livestock foraging, and the ability to store carbon in a changing climate,” Wiechman said. “It’s really important to get out and protect these intact landscapes from significant loss and degradation.”

Ecological collapse of the west’s sagebrush biome would devastate the landscape, leading to the loss of native species and increase the impact and probability of wildfires.

Sagebrush stays green all year long, only dropping its leaves during periods of drought and blooming again after a rainstorm. Sagebrush also grows far apart, making it poor fuel for wildfire.

Annual grass like invasive cheatgrass do not survive all year long, instead growing in huge volumes in the spring and dying off in the summer where it provides ample fuel for the West’s fire season. Cheatgrass significantly lengthens the fire season by drying out earlier than native vegetation. Wildfires then create even more cheatgrass dominated landscapes since native plants aren’t adapted to survive frequent wildfires.

Invasive annual grasses accounted for 19.2 million of the 38 million acres identified as “growth areas,” according to the study.

“Far and away, the biggest and most widespread threat we’ve documented is invasive annual grasses,” said Maestas. “What we showed in this report is that this is actually a biome-wide problem. Even Montana and Wyoming are experiencing degradation from this invasion.”

In Nevada, more than 70% of sagebrush degradation is the result of cheatgrass, conifer invasion, and subsequent fire cycles that are too frequent and too large to sustain sagebrush, said Maestas.

The Sagebrush Conservation Design was designed to identify areas where resources will be most impactful, said Maestas. The design will be updated annually, providing land managers with the most current information. When used alongside other management tools states and counties will be better situated to reach holistic conservation solutions.

“Over the last handful of years, there’s a lot more science coming out that is improving the effectiveness of our treatment methodology,” Wiechman said. “It’s not that we haven’t been trying to solve this for the last 20 years, it’s just that now we have new methods that allow us to see a higher return on our conservation investments.”