Evacuation orders have been issued for parts of Douglas County and residents are being told to leave.

The affected areas include:

Nevada Department of Transportation has issued soft road closures in the area, only allowing travel for residents and employees who must enter the area to access home or work.

A day after declaring a state of emergency, Gov. Steve Sisolak said he’s been impressed with progress made in the last 24 hours against the massive Caldor Fire that is burning its way into the Lake Tahoe basin.

At last update the fire had scorched nearly 192,000 acres and was about 16% contained.

Sisolak said during a press conference Tuesday that he’d just come from a meeting with local, state and federal leaders and that everything possible is being done to combat the blaze.

“We are using all of our resources, everything we have at our disposal, in coordinating closely with CAL FIRE, the lead for the Caldor Fire—to ensure the health and safety for all of our residents, protect homes and businesses and our beautiful Lake Tahoe,” he said.

Jon Bakkedahl, the state’s emergency management program manager, said preparations for the current situation, in which the fire is dangerously close to crossing the Nevada state line, have been underway for the past 10 days, including for evacuations and additional firefighting resources.

“We are planning days and up to weeks ahead to make sure we have a coordinated response. We don’t want to be playing catch-up and not have the resources in place,” Bakkedahl said.

He also noted the work of the American Red Cross in setting up shelters for evacuees in Carson City, Douglas County and Reno. (More information on shelters is listed below.)

“Lake Tahoe, really, is a national model for effective collaboration between agencies.”

The Governor’s Office of Energy is working to make sure there’s an ample supply of fuel for the vehicles of evacuees to get out of the area, and the Nevada Department of Agriculture is monitoring food supplies in grocery stores in the communities to which evacuees are headed.

Major General Ondra Berry, the adjutant general for the Nevada National Guard said, “Working together is really critical for an incident like this.”

He said the National Guard has 55 members working on the fire, but that number can be doubled or tripled if needed. Guard members are working on traffic control in support of evacuation and air attacks against the fire.

NDF Deputy Administrator John Christopherson said agencies, including his own, have been training for an event like this for years, and it did not catch them by surprise.

Two super scooper airplanes capable of picking up massive amounts of water from Lake Tahoe to drop on the fire are being sent in by the U.S. Forest Service, Christopherson said.

“Lake Tahoe, really, is a national model for effective collaboration between agencies,” he added.

Sisolak said he and other officials are still hoping that the fire might not make its way into Nevada, but Nevadans around the lake need to be prepared to get out immediately in the event it does.

Sisolak urged Nevadans to reach out to their neighbors and check on them. He encouraged anyone who knows someone in the current evacuation zone who has yet to leave to put pressure on them and offer resources to help them do so. Evacuation warnings for parts of Douglas County were also issued last night.

Local businesses, organizations and nonprofits have offered resources and donations to help evacuees and first responders during the Caldor Fire. 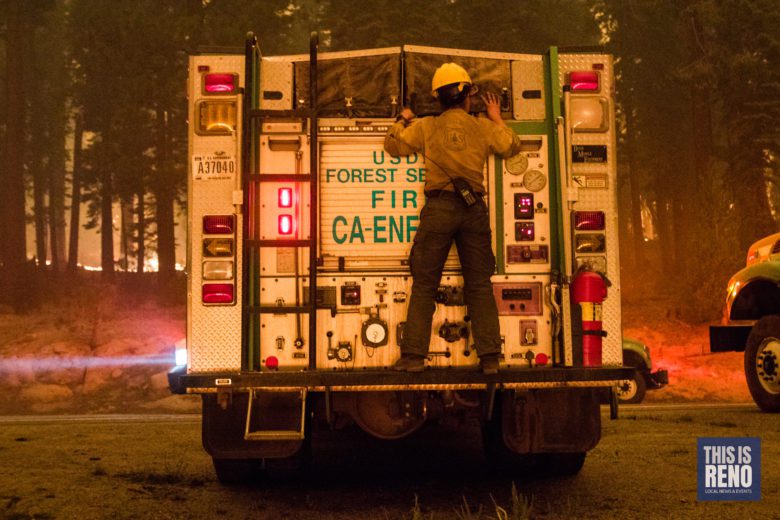 The Red Cross is operating four evacuation shelters in Nevada, including one in Reno. All staff and evacuees will be required to wear face coverings inside of the emergency shelters, regardless of vaccination status.

Clients are staying both inside as well as outside in recreational vehicles at these shelters. Those who choose to stay outside still have access to all Red Cross services provided by the shelter.

To become a volunteer:

“With disasters taking place up the road, across the country, and around the world, we urgently need volunteers to help provide assistance to people affected by disasters,” Red Cross officials said. “Please visit redcross.org/volunteer to sign up today.”

To make a donation:

Red Cross officials said, “We are very grateful to members of the public who have reached out about in-kind donations. At this time, we have very limited ability to accept in-kind donations due to COVID-19 restrictions. The best way to contribute is to visit redcross.org/donate to make a financial contribution or text REDCROSS to 90999 to make a $10 donation.”

Correction: The personnel count provided by NDF was mis-stated during the press conference. They sent four 20-person crews to the fire, not 20 four-person crews.

Jeri Chadwell came to Reno from rural Nevada in 2004 to study anthropology at the University of Nevada, Reno. In 2012, she returned to the university for a master’s degree in journalism. She is the former associate and news editor of the Reno News & Review and is a recipient of first-place Nevada Press Association awards for investigative and business reporting. Jeri is passionate about Nevada’s history, politics and communities.