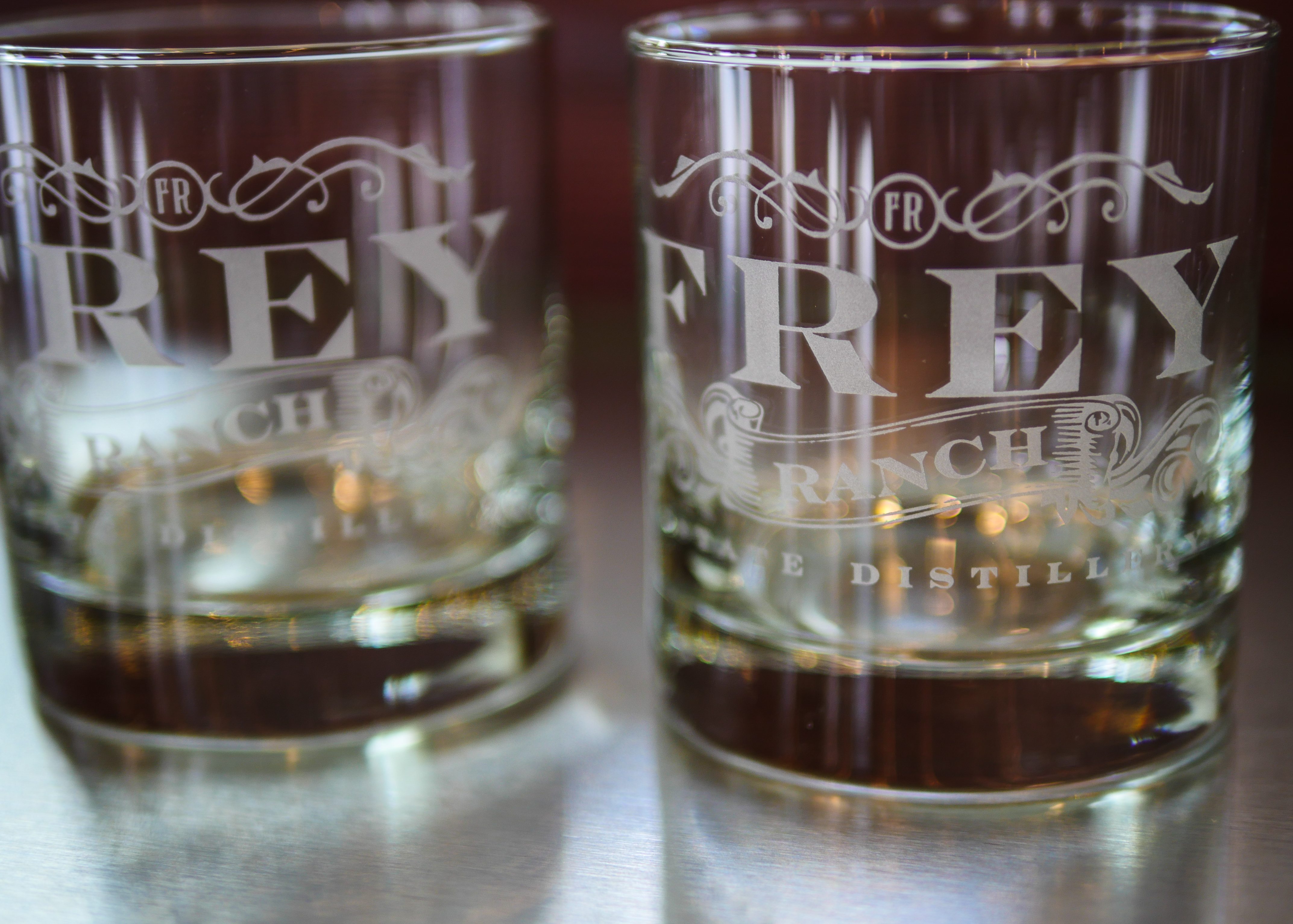 What do you call a business that grows its own grains, distills and matures them into spirits, and then bottles them all on site? It’s called Frey Ranch Estate Distillery – a true farm distillery producing bourbon whiskey, rye whiskey and a series of innovative whiskies set to hit the market in 2021.

Being a wine writer for the last ten years, I am new to the whiskey scene and was fascinated to learn about it. Ashley and Colby Frey, married owners and self-described whiskey farmers of Frey Ranch Distillery, patiently broke it down for me, describing their business and the fine art of whiskey-making.

Colby’s family started farming grain crops in the rich soils of Genoa, Nevada, dating back to 1854 – a full ten years before Nevada became a state.

Throughout five generations, the Fallon farm continued to grow grain crops including wheat, rye, barley and corn. “I’ve worked on the farm since I was a little kid,” Colby explained. And then in 2009, Colby and Ashley, newly married, bought the ranch from his parents.

“Ashley and I always wanted to create something together and thought that making whiskey would be a great way to showcase our farm’s grain crops, and merge my two passions, farming and whiskey!” he said.  “It was important for me to carry on the farming traditions of my grandparents and parents.”

Ashley and Colby share all of the responsibilities of their business.

“Our goal has always been to grow our crops for quality, not quantity,” said Colby. To ensure the best quality, great care is given to irrigation, soil amendments and the selection of seed. “Like the making of food, the better the inputs; the better the outputs. We want to do the same thing with our whiskey.”

Unlike wine, where a bunch of neglected grapes will eventually decompose themselves into wine, whiskey making is a complex science and anything but accidental.

Colby recited the basics, “After the grains are harvested, they’re stored in a silo, milled into a fine powder, then added to the mash cooker where water is added. We then add yeast to ferment the grain to provide alcohol.  After the fermentation is completed, the liquid is heated above 172 degrees, or the boiling point of alcohol. At this point the alcohol turns into a vapor, which we then condense back into liquid form, before it’s put into a barrel to age for five years.”

You know it’s good when someone comes back to buy that second bottle.”

In order for a whiskey to be called bourbon, it must contain 51% or more corn. Most bourbon whiskeys are made using three out of four common grains: corn, barley, rye and wheat.

“Our whiskey is special because we make it with all four grains,” said Colby.

Their flagship whiskey is their bourbon whiskey which they age for an average of five years. Their newly released rye whiskey is aged a little over five years in the barrels before bottling, and because it is a limited edition, every bottle is numbered.

“We sold five times more than we anticipated,” Colby said. “We are really fortunate to have received a lot of support from the community.” Ashley added, “It’s easy to sell that first bottle, but you know it’s good when someone comes back to buy that second bottle. People say they’re proud that the whiskey is being made in their state. That’s what we love to hear.”

While I sipped on a sample of their bourbon whiskey, Ashley described the whiskeys’ qualities. “The bourbon whiskey is very smooth tasting of vanilla, caramel and maple. The rye whiskey has honey on the nose; and on the palate it becomes spicy with a citrus finish.”

The word, bourbon, is exclusive to the United States, similar to how “champagne” is proprietary to France. Colby continued, “Bourbon is a very American product – produced from ‘amber waves of grain’. Our goal is to distribute our whiskey to all 50 states; always making sure that our Nevada home is taken care of first.”

The Frey’s take a common-sense approach to sustainability by employing simple processes that not only save time and money but that are also easy on the land. As examples, the liquid by-products from the stills are released into the surrounding ground to help balance the soil’s pH.

They grow all their grains right there on the ranch, so there is no need for diesel fuel to truck in supplies. And instead of glycol chillers, they use reservoirs to chill the stills. “Best of all, we sell the solid by-products from the still to feed the next-door dairy cows. In return, they give us back fertilizer that we use to spread on our farm,” said Colby.

According to Colby, “We take pride in keeping our farming practices sustainable. My parents and grandparents took very good care of their land and we want to do the same. On the bottom of every bottle is the embossed sentiment, ‘Be good to the land and the land will be good to you’.”

Frey Ranch is open on Saturdays from Noon to 4 p.m. for complimentary tours and tastings. No appointment is necessary. Their spirits are available for purchase.

For more information visit their website:  www.freyranch.com and visit them at 1045 Dodge Lane in Fallon.

Bev recently moved to Reno from the Bay Area where she finished out a career in Human Resources and, as a side gig, wrote about the local wineries there in a weekly wine column. She also published a historical photo book, The Wineries of Santa Clara Valley. A self-described wine enthusiast, Bev enjoys discovering the people behind the wine, becoming friends and celebrating good times. Bev is a member of Nevada Vines and Wines and is excited to explore and share Reno’s budding wine industry with our readers.