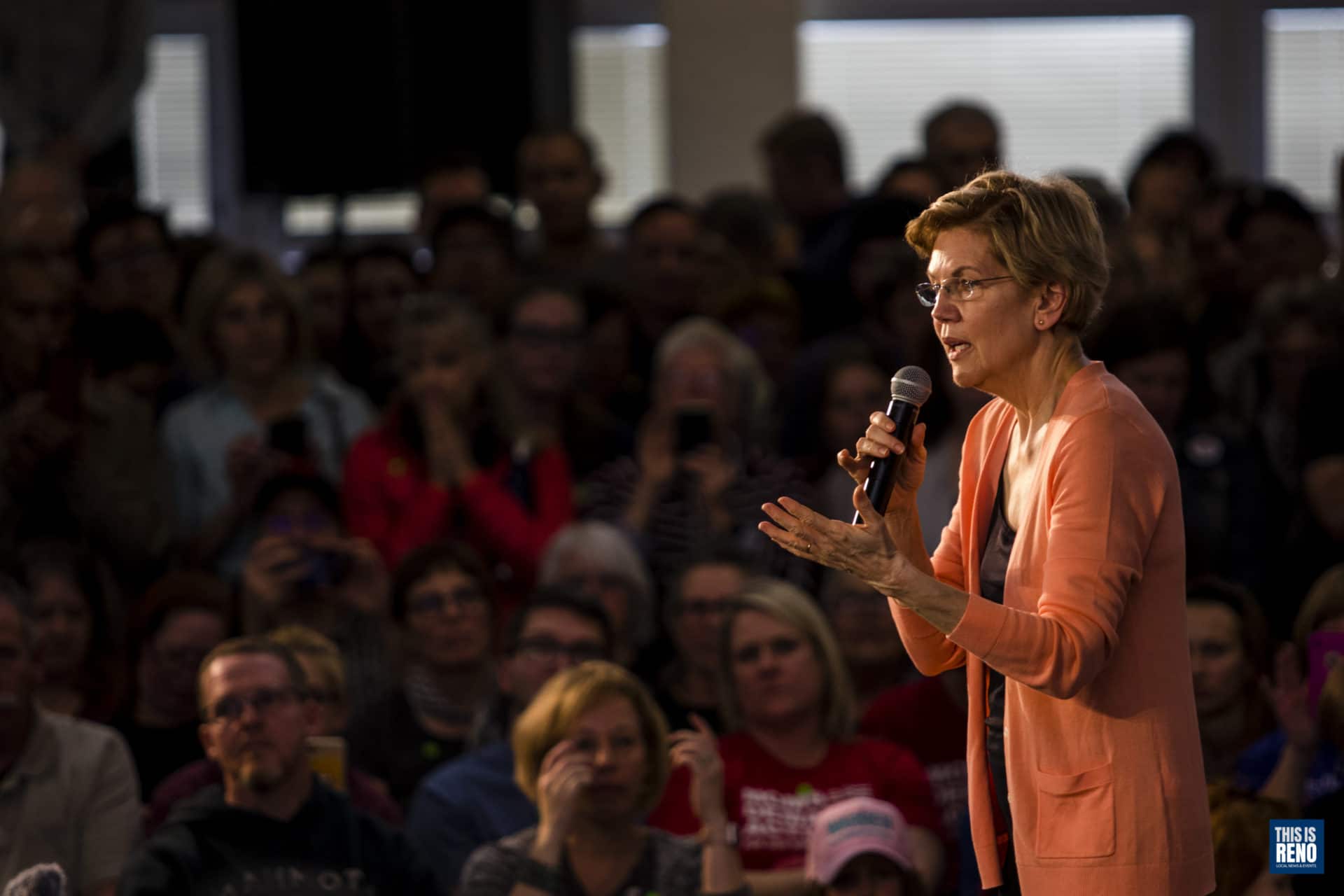 On Sunday U.S. Senator and presidential hopeful Elizabeth Warren (D-Mass.) returned to Reno for a rally at Reno High School. The swing through northern Nevada was timed to coincide with the start of early voting in the Democratic caucuses, which began Saturday and continues through Tuesday, Feb. 18. The primary caucus events are scheduled for Saturday, Feb. 22.

Dolly Parton’s “9-to-5” played as Senator Warren was introduced to the crowd of about 1,100, as estimated by campaign staff. She sounded hoarse and spoke more quietly than normal, which caught the attention of more than a few attendees.

“Bad news and good news,” she said.  “The bad news is, after more than 100,000 selfies I caught somebody’s cold. Good news is, nevertheless I persist!”

And persist she did. She explained her decision to continue despite her cold saying, “People told me when they heard me early this morning, they said, ‘You gotta cancel your day in Reno.’ And I said, ‘Well, you know, Reno’s been left out of way too many conversations for way too long. That’s not gonna happen on my watch.’

“So I thought what I do today is something very different. I would love to be doing our full-on cheer. But I thought what I [would] do is tell you, just for today, a little quieter story about why I fight, from the heart. And then we’ll take just a few questions. I’ll try to do my best.  Then we’ll do that most important part, selfies! I’ll be here for as long as we need to do them, because I’m so deeply honored that you would come here today.”

University of Nevada, Reno student Dionne Stanfill, who is voting in her first election, said, “I’m really interested in a lot of the candidates, but I would like to hear first person what she has to say and get a broad interpretation of what she stands for.”

Warren, despite fighting a cold, spent just 10 minutes sharing what she stands for before opening it up to questions for another 20 minutes, typical of most of her town hall events.

She covered childcare costs and her own struggles in finding childcare when she was a teacher, a struggle that eventually cost her her job.

“The reason I tell you that story is because I stand here today because I had an Aunt Bea, but most of America doesn’t have an Aunt Bea. I think about how close I came to getting knocked off the track. And sure, maybe someday I would have gotten back on it. Maybe. Although those jobs were hard to come by.

Warren, known for her plans, talked about her healthcare policy and her plan to take on health insurance companies, the costs of education, affordable housing and other national policy proposals. Despite the disaster she sees in the current administration, Warren expressed optimism for the U.S.

“Donald Trump has been a disaster. Understatement. But understand this: what was broken in our country was broken long before he came along. He has simply brought it all to the surface and made it all worse.”

After the event in Reno, Warren headed to Las Vegas to campaign with former HUD Secretary and former 2020 presidential hopeful Julian Castro (D-Tex). Warren will be participating in the upcoming Democratic debates televised on NBC on Wednesday, Feb. 19 in Las Vegas.