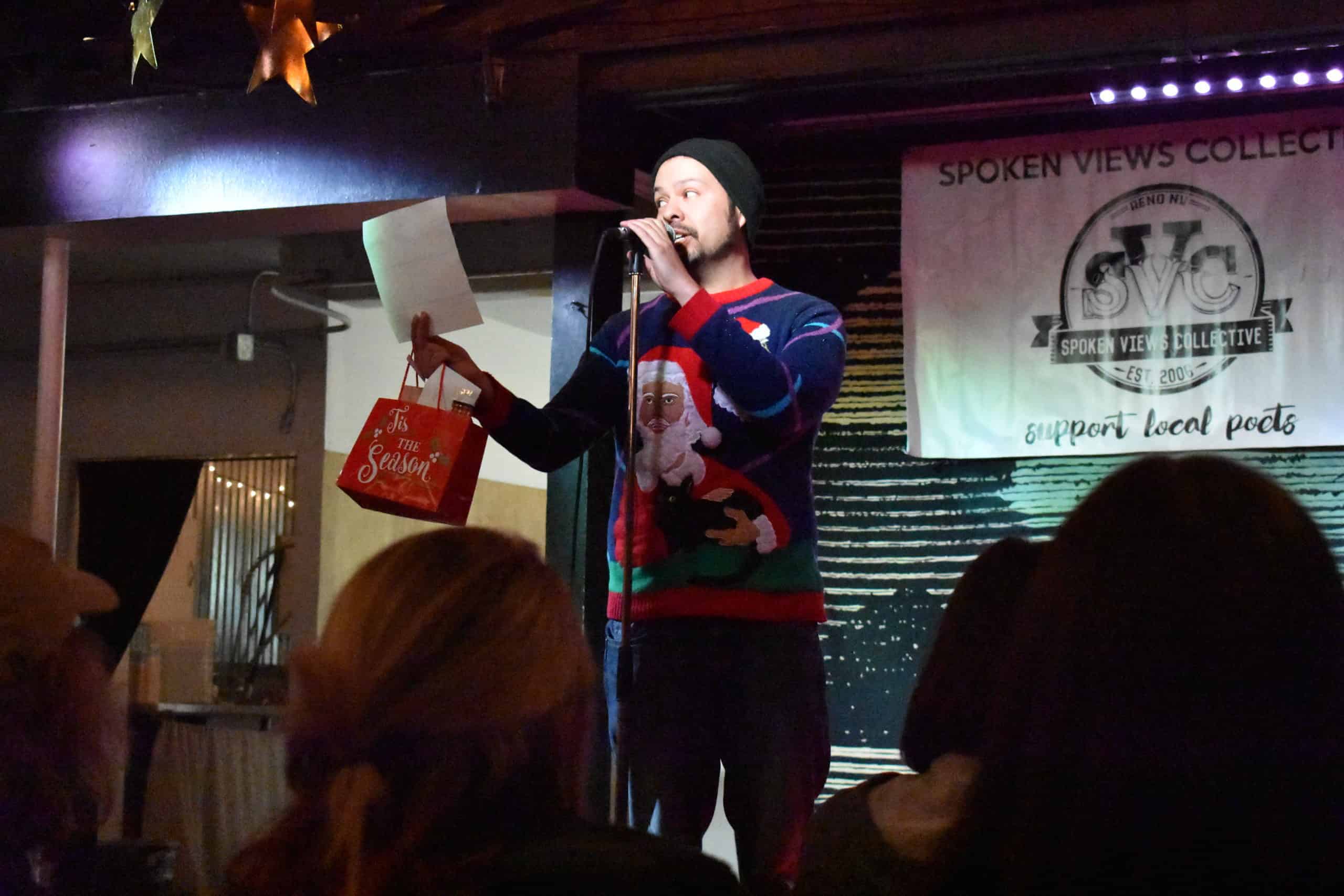 Last Wednesday’s Ugly Sweater Slam brought a festive touch to poetry night at Holland Project, and a touch of challenge. Participants at the monthly Spoken Views Collective poetry event took a round of open-mic performances before launching into a three-round poetic competition judged by audience members.


The first round of the competition was a free choice original poem, the second round featured a Vanna White-style spinning wheel, which competitors spun to select a random holiday piece they then had to recite, and in the third round, the artists read a letter or poem to Santa.


Steve Elegant hosted the poetry slam and opened the evening with an original poem ending with, “tonight is for the dreamers.”

His words could not have captured the feeling in the warmly lit room any better. First-time performers and seasoned poets alike stood in front of the mic and shared their poems about work culture, “if you keep busy enough, you won’t have to see the stars,” how we mourn the loss of loved ones around the holidays and the ever-present problem of selfhood, among other topics.


One poet discussed forgiveness as it related to a tenuous family relationship, acknowledging “forgiveness is a tricky thing.”

After speakers shared their words, audience members snapped their fingers, and nodded in agreement, laughing and murmuring with sympathy as they empathized with the varied emotions and situations the poets presented.


The competition between the performers was steep, but Jesse Ziegler, who performed a Kermit the Frog spoken-word rendition of a Christmas song in the second round, took home the grand prize.


I have a lot of ideas and thoughts that I feel should be shared. This is a very welcoming spot.”

Ziegler acknowledged the healing power of poetry when he said, “there is no therapy like telling a group of people how bad or how good it has gotten.”

Iain Watson, one of the founders of Spoken Views Collective and an organizer of the event, said he helped start the nonprofit in 2006. The collective began as a way to give people in the community a safe place to express themselves and share their poetry, a space Reno previously lacked.


“[Spoken Views] opens up a safe spot for people of all different backgrounds and we want to hear their voice, and we want them to be comfortable sharing what they’re going through, and I think [sharing poetry is] important to open people’s minds up,” he said.


Watson said Spoken Views helps poets participate in national competitions and is expanding the poetry collective to include more young people, such as high school students, who have compelling ideas, but perhaps lack a space to develop and share them.


“If we don’t continue reaching out to the youth and showing them this art form and exposing them to it at least, and knowing that there’s a community of it, then the collective can come to a stop. The hope is to keep building the community and say, hey, there’s a place to come if you want to get involved.”

Isabella Gaither, one of the performers in the open-mic section of the event, said she was a fifth-grader when Spoken Views empowered her to share her voice.


“[The poetry events] are just a really open space where you can share your ideas and thoughts, and I have a lot of ideas and thoughts that I feel should be shared. This is a very welcoming spot, and all the people here are always really welcoming to new people,” Gaither said.

Gaither and Watson urged anyone interested to come to a poetry event that happens every third Wednesday of the month. Watson said if people want to help out or get involved, contact Spoken Views through their website http://spokenviews.org/.

Tabitha Mueller
Tabitha Mueller is a freelance writer and multimedia journalist based out of Reno, Nevada. She is fascinated by storytelling, place, and the intersection of narrative and data analysis and holds a bachelor’s degree in Geography and English and American Literatures from Middlebury College. When she is not tracking down a story or listening to podcasts, you can find her hiking Nevada’s gorgeous terrain, perusing local bookstores, playing Quidditch, and discovering Reno’s hidden stories.