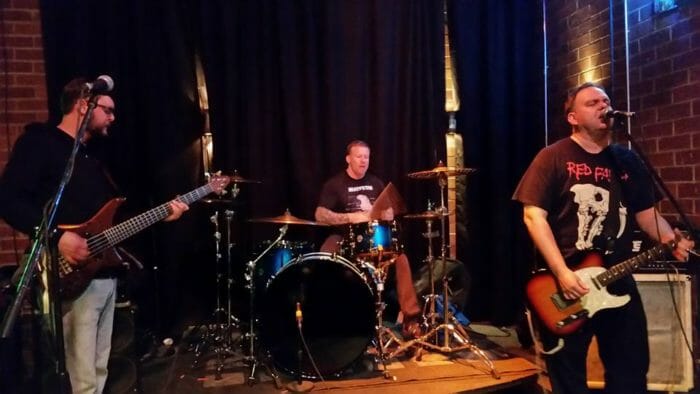 As Vague Choir, it was in 2011, although we all three played together in the death throes of Mister Vague (the band) in 2006-2008. We had been friends for years before, pretty much as bassist Mark Mayhall played in Reno a ton starting a year after he moved here, 1998 onward. Jason Thomas, the drummer, and Marcus also played together in Above All Things before Vague Choir.

Our fans are old farts and the occasional young ones, mostly in Reno-Tahoe. We’ve also played in the Pacific NW a bunch, including Seattle and Richland multiple times, and Portland here and there. We should go back and play in the Bay someday.

We say all sorts of things that are hard sells in these modern times: post-punk, prog-punk, loud shit, music with guitars, “just rock.” Our favorite portmanteau is when his friend Allen called us, “The Pixies meets Rush.”

Well, the Pixies and Rush. Other musicians that we all agree on include REM, PJ Harvey and the Afghan Whigs.

Well, that would put us at about 18 years playing together, so that would be wonderful. Just some more records to put out, playing out of town more would be nice, nothing too crazy. What we do doesn’t promote mass fame, which is fine.

We are most active on Facebook: facebook.com/vaguechoir. To buy our music, go to Bandcamp: vaguechoir.bandcamp.com