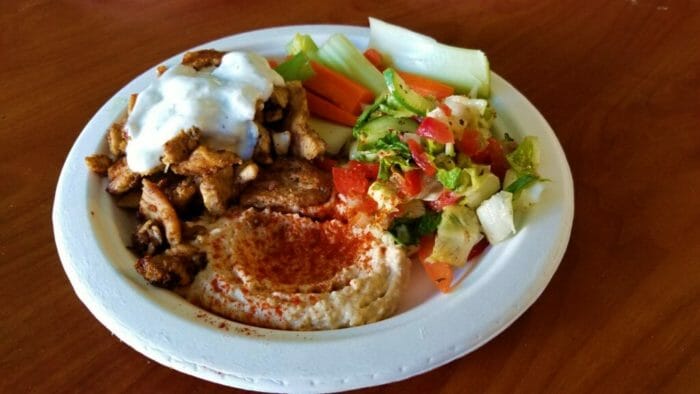 This article is subscriber content and will be public for two days before being available only to subscribers. Join here to support local journalism and gain full access to the website.

Hummus Fresh on California Avenue serves a nice variety of Mediterranean dishes using a fast, fresh and affordable model. Owner and operator, Ray Salaho, prepares his falafel using a family recipe that originated in Lattakia, Syria. Salaho’s father popularized falafel in Lattakia in 1949. The 70-year-old recipe produces some of the most distinct and delicious falafel that I’ve tried.

Upon entering Hummus Fresh, diners will find the specials written in chalk on the left wall, seven pitchers of various teas on the right wall and the ordering counter at the front. Bright green paint and locally produced art adorns the walls. The seating and tables are simple and comfortable. Salaho played music at a reasonable volume that reminded me of Trance.

Salaho keeps the food prices down and the service fast by using paper plates and plastic dining ware. Self-serve water, tea and canned soft drinks contribute to the quick-service model. 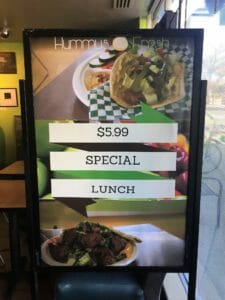 I asked Salaho where he learned to cook the cuisine that he serves in his restaurant. He explained that his father opened one of the first falafel shops in their home town of Lattakia aka Latakia aka Latakiya. Lattakia is the principle port city of Syria.

I asked Salaho if all the dishes in his restaurant have Syrian origins, and he explained that they all have general Mediterranean roots. I can’t say why, but I often associate Mediterranean food with Greek food. Greece is in fact in the Mediterranean region, but so is Lebanon, Egypt, Turkey and several other countries.

As someone interested in food, I’m a little embarrassed that I haven’t taken more time to learn the nuances to the cuisines in various Mediterranean countries. I would guess that many of the countries bordering the Mediterranean Sea have country-specific spins on dishes common to the region, but I can’t speak to those nuances or speak to what each country cooks that’s totally unique.

I won’t excuse my ignorance of geography and regional cooking. I will say, though, that the cuisines served in a person’s hometown absolutely shape that person’s understanding of the world. I want to avoid falling into ignorant culinary stereotyping. Some lump together the cuisines of Mexico, Central America, South America and Spain because Spanish is the dominant language spoken in those places. Similarly, some people will say they are craving “Asian” food. Does that mean Korean, Vietnamese, Russian, or something else?

One remedy for cultural and culinary ignorance is travel, but little things like finances and war don’t always allow for expeditious world travel. Suffice to say, I feel a renewed need to see more of the world, its food and its people.

You Can Never Have Enough Citrus 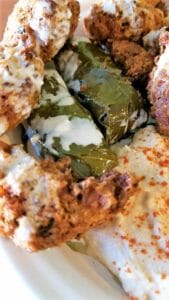 My wife, grandmother and I dropped into Hummus Fresh after a wonderful time at the Nevada Museum of Art. The museum grants free admission to the public on the second Saturday of every month.

My wife had previously eaten at Hummus Fresh, so we followed her lead. We ordered one Mediterranean Plate and two Paleo Plates. None of us are dieting, but the Paleo Plate sounded tasty. Each plate was $9.99.

My wife and I each ordered self-serve tea and my grandmother ordered a canned soft-drink. Each drink was $2.00. The tea variety was great with options including: peach, mint, lemon, chai, ginger, jasmine and black & green. The chai tea was brewed a little too weak for my taste, but I liked the variety. A miniature ice machine did its job and added a bit of novelty to the experience.

The Paleo Plate included sticks of celery and carrots, a small romaine salad, small pieces of tender sliced chicken covered with tzatziki (herbaceous, citrusy yogurt), and a hearty portion of hummus (ground beans). I forgot to confirm the type of beans used in the hummus, but they seemed to be chickpeas. A dusting of ground chilies enlivened the hummus. Diners should note that the Paleo Plate includes choice of one meat and not all three (beef, lamb, chicken) as the menu might seem to indicate.

The celery and carrot sticks seemed fresh and they were great dipped in the especially creamy hummus. The salad was tasty and included finely chopped romaine, diced tomatoes, diced onions and finely diced cucumbers. The dressing seemed to be a light, citric vinaigrette. 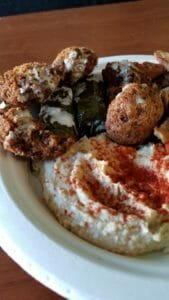 You need these (falafel) balls in your life. Image: Kyle Young.

The chicken was fantastic by itself and was further enhanced by the tzatziki. Salaho said that he marinates the chicken in a liquid containing vinegar, lemon juice, allspice, cinnamon, cumin and other spices. “You can never have too much citrus juice in a chicken marinade,” said Salaho. After eating his chicken, I tend to agree. The citric acid tenderizes as well flavors the meat. The tzatziki atop the chicken was different than I had tried elsewhere, but very tasty. The dominant flavor of the sauce was citrus instead of mint and it had a nice body to it.

The Mediterranean Plate included the same great foods as the Paleo Plate but with the addition of stuffed grape leaves, falafel and grilled pita slices. Salaho purchases the pita from a baker in Sacramento. I enjoyed the density and flavor of the pita. The grill added great flavor and texture.

I had previously thought that stuffed grape leaves and dolmas are one in the same. A little research indicates that is true, but I discovered that dolmas come in many varieties from many cultures. The common ingredient to dolmas is the grape leaves, but people stuff them with all sorts of ingredients such as vegetables, meat, tomatoes, peppers and more.

Salaho stuffed the grape leaves that we ate with rice and a citric sauce. He served them cold and they were absolutely delicious. The texture of the leaves reminded me of collard greens, but my wife said that description didn’t capture her experience.

The falafel was really the star of the show. The ground and fried chickpeas had the most wonderful, distinct texture and flavor. The delicate, crunchy texture reminded me of an air-fried food, but Salaho confirmed that he fries them in vegetable oil using proprietary methods. The falafel included peppers, chilies, mint, parsley, cilantro and more. The falafel at Hummus Fresh is worth the trip alone.

Visit Hummus Fresh at 100 California Ave Ste. 106, Reno, NV 89509. Call in your take-out order at 775-971-4220. Visit Hummus Fresh online at www.hummusfresh.com. They are open 11 a.m. to 4 p.m. Monday through Saturday. They are closed on Sundays. When Salaho finishes his workday at Hummus Fresh, he heads out to his second restaurant, Just Ravioli, where he serves food from 5 p.m. to 9 p.m.