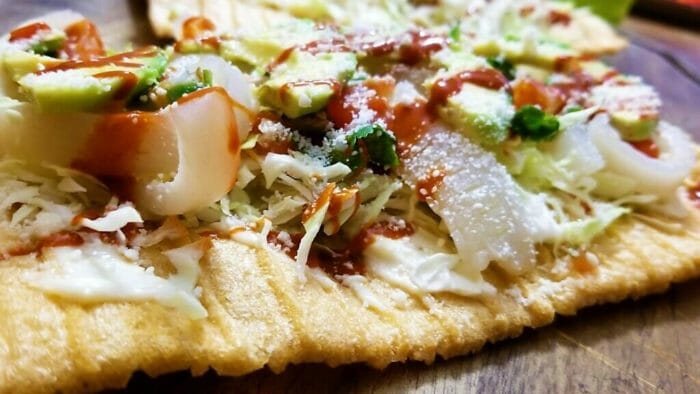 This article is subscriber content and will be public for two days before being available only to subscribers. Join here to support local journalism and gain full access to the website.

Antojito’s Colibri is a Mexican dessert and snack shop on South Wells Avenue in Reno. Antojito is Spanish for snack, and Colibrí is Spanish for hummingbird. The shop serves a wide variety of treats including aguas frescas, smoothies, ice cream, elote, esquites, chamango, tostiloco, duro preparado, raspados and more.

A Dessert Shop with a Sweet Story 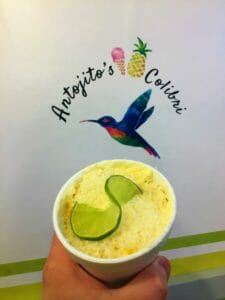 The Muñoz family greets visitors that enter the shop. Mauricio Muñoz explained that his mother, Maria Elena, is the owner and his father, Benjamin, is the weekday manager of the shop. Although Mauricio has a full-time job elsewhere, he helps his parents out in their shop whenever he can. My wife and I soon learned the extent to which the Muñoz family helps one another.

Their family began building a life together in Truckee in the late nineties. Maria Elena spoke very little English at that time, but she had an enterprising spirit. She started her own cleaning service with nothing more than a bicycle and some sparse cleaning supplies. Her children would sometimes help her clean once their homework for the day was completed.

Maria Elena recalled how torn she was about investing in a vacuum for her business. A decent vacuum at that time was $100, and she couldn’t comfortably afford such an expense. Knowing that she had to invest in herself and her business, she went ahead with the purchase. Not long after, she saved enough money to upgrade her bicycle to a fixer-upper car. The car didn’t have the ability to drive in reverse, and the seller wanted $500. The seller struck a deal with Maria Elena, because she believed in helping an immigrant start her future. 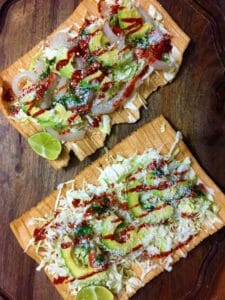 Approximately eight years ago, Mauricio and his wife ushered a beautiful baby girl into the world. Tragedy struck when Mauricio’s daughter was diagnosed with brain cancer. Due to the nature of the cancer, Mauricio and his wife sought treatment for their daughter in Sacramento, CA. His daughter’s situation plagued him with anguish. He shared that one reason he was able to tread forward was that his mom drove from Truckee to Sacramento and back every day to support her family. On one especially memorable trip, Maria Elena brought her son and daughter-in-law sushi in a cooler to brighten their spirits.

Mauricio’s daughter has been in remission for about four years now. She is alive and flourishing due in large part to her family that never gave up. Mauricio, a Dreamer, puts in a full day’s work at his day job and then he comes to Antojito’s Colibri to close the shop and help out in whatever way is needed. He summed up the ideal he lives by when he said, “I try to balance being a good father with being a good son.”

As previously stated, colibrí means hummingbird in Spanish. In many Latin American cultures, the colibrí is a symbol for strength, hope and migration. After listening to the myriad ways that the Muñoz family overcame serious adversity, the colibrí will stick in my mind as a symbol of hope. 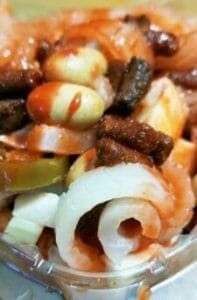 Newcomers to Antojito’s Colibri receive a free scoop of ice cream. My wife and I decided to share a scoop of the coconut pineapple. The scoop was tasty with both flavors playing their roles. The Muñoz family explained that they make pretty much everything in their shop except the ice cream.

The shop prepares the aguas frescas daily with fresh fruit, water and sugar. Flavor options include watermelon, strawberries and cream, tuna (aka prickly pear), tamarind and many more. My wife opted for the watermelon and I, at the advice of Maria Elena, selected a combination of the lime, cucumber and pineapple. We both absolutely loved our drinks.

The esquites were tasty, but next time I think I’ll go for the standard elote. The yellow and white corn tasted freshly cut into the cup. They were great with the mayo and Cotija cheese, but the heating process caused the corn to release too much moisture for my taste.

The takilocos, a sub-variety of tostilocos, included Takis (think rolled Doritos), Japanese peanuts, tamarind gummies, cucumber, jicama, chamoy (sweet, sour, salty and savory pickled fruit sauce), Tapatio and cueritos (pickled pork skin slices). I loved the mixture of fruit and junk food. Unlike pickled pig’s feet, the cueritos had no off-putting scent. Their taste was subtly of vinegar and pork, but I think their main purpose is to add a distinct texture to the dish. The texture of the cueritos is part firm and party gummy and that texture against the crispy chips, fruit and peanuts was great. The tamarind gummies brought some sugar and another interesting texture into the mix.

The final dish was the duro preparado. A duro, aka duros de harina, is a type of puffed wheat that comes in pinwheels or rectangular sheets. The dish duro preparado uses the rectangular version. Upon the duro gets placed mayonnaise, shredded cabbage, pico de gallo, sliced avocado, lime, hot sauce, cheese and cueritos. At the advice of Mauricio, we opted to carry home the ingredients separately to later be assembled. Mauricio advised that this would prevent the duro from getting soggy.

It was easy to dress the duro and the resulting dish was fantastic. The crunches of the duro and cabbage were excellent against the creamy avocado and chewy cueritos. The acidity of the hot sauce and lime were wonderful paired with the mayo. I think this dish is a bargain at $4, and I will definitely order it again.

You’ll need more than a hummingbird’s appetite to enjoy the wide variety of house-made, delectable  offerings at Antojito’s Colibri.