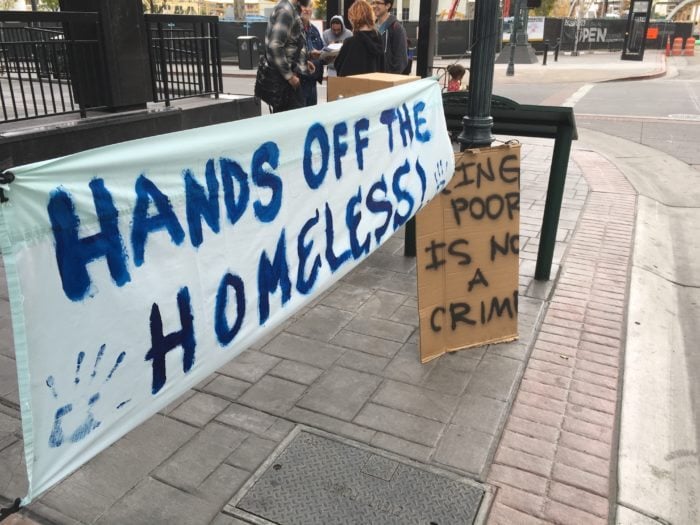 Advocates for the homeless protested at City Hall in 2015. Image: Bob Conrad

The Medical Examiner’s office first began in 2016 tracking deaths of people listed as not having a fixed address.

“There were 37 homeless/indigent deaths in Washoe County in 2018, as defined by the Medical Examiner’s database as having an address listed as ‘no fixed address,'” said county public information officer Adam Mayberry. “Of these, six were known to be staying with family/friends or in a hotel/motel, and two were known to be staying in a RV / travel trailer … not outdoors.”

Most who died in 2018 were male — 32 — while five females died. The following were listed as causes of death:

Government agencies continue to wrestle with how do handle the region’s rising homeless population. An emergency shelter was recently set up for the second year in a row at the Community Assistance Center on Record Street.

Both Washoe County and the City of Reno have paid for the temporary shelter, while the City of Sparks has not yet committed to funding as of early December.

“(The) good news is that it is up and functioning, but no decisions were made about (Sparks’) financial commitments,” said City of Sparks spokesperson Julie Duewel.

Solutions Season One: The Rise of The Homeless