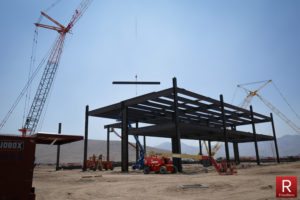 Reno and Sparks have been creating new jobs at a faster pace than any other metropolitan area in the United States, and the region’s overall economic performance ranks 11th in the nation.

A year ago, Milken ranked the region’s job growth at 28th in the nation, and its overall economy was ranked 37th strongest.

But the study also noted that wages are not increasing as rapidly as jobs in the region.

Over the past five years, the Reno-Sparks region ranked 52nd in the nation in wage and salary growth, researchers found. But the wages may be taking off, as The Milken Institute found that the region’s wage growth recently has been 10th strongest in the nation.

Lagging wage growth has been cited as one of the big reasons that many residents of Reno and Sparks can’t afford housing. New jobs attract newcomers to the region, pushing up the demand and price for housing. But wages haven’t kept pace.

Despite the strong overall economic performance, the Milken Institute researchers found that high-tech industries continue to play a relatively modest role in the region’s economy.
The Milken researchers took a look at the total economic activity in the region, then figured how much of it was created by technology firms.

On that measurement, Reno ranks 136th in the country, a level that hasn’t changed much in recent years.