REVIEW: Crack a Bat and a Smile at Tommy’s Grandstand 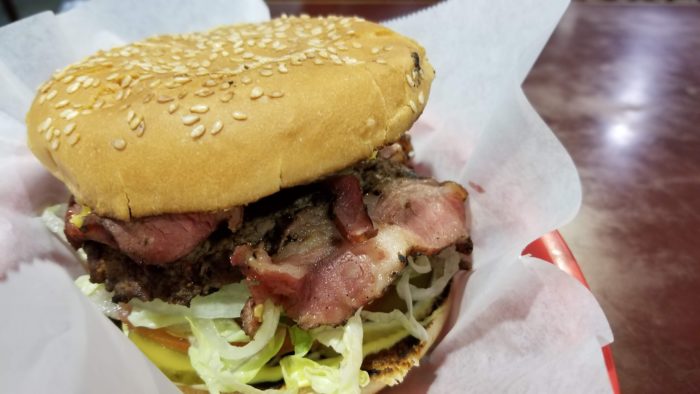 Tommy’s Grandstand in Sparks offers killer burgers, batting cages and beer. The spot is excellent for families, business meetings and even blowing off some steam on your lunch break. Owner and operator, Tom Newell, brings a lot of heart to this Sparks classic.

Tommy’s Grandstand Is Best of Class 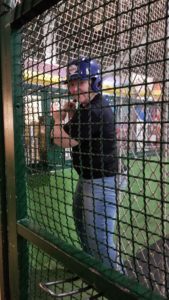 I’ve been coming to Tommy’s Grandstand for a few years now. I used to work near there on E. Greg St. in the industrial side of Sparks. Some of my favorite business meetings, if there are such things, happened at Tommy’s. You get to break the ice a little with a new business associate by smashing baseballs or softballs, and then you get to bond over some of the best burgers and onion rings northern Nevada has to offer.

There aren’t many spots in town that offer food and recreation at such high qualities. When I say high quality, I don’t mean that Tommy’s produces craft, artisanal or luxury-type food or experiences. The opposite of artisanal, i.e. divey, doesn’t describe Tommy’s well either. The best way I can explain it is that Tommy’s is like the neighborhood pizzeria that you went to as a kid and then when you grow up, you take your kids there. If you’re lucky, you’ll get to take your grandkids to Tommy’s. Expect all that except burgers and sandwiches instead of pizza. I guess what I’m trying to say is that you can feel a sense of community at Tommy’s.

On the Sunday afternoon that my wife and I hit some balls and ate there, a few people sat at the bar drinking beer and watching football while the majority of occupants seemed to be youth athletes honing their hitting and pitching skills.

Living a Dream That Grows Richer

My wife was an elite youth athlete in softball, golf and swimming. I played a bunch of sports as a kid, but my level of skill and coordination never allowed me the kind of passion that my wife had for sports growing up. I smiled ear to ear when I saw her chatting up a young man at Tommy’s about the difficulties of hitting slow pitch softball versus the ease of hitting faster balls. Newell later explained this phenomenon to us as having to do with the need to generate the power yourself when hitting a slow pitch softball versus the ease of tapping into the power of a ball moving faster.

Many know, though I’m sure some do not, that Tom Newell is a local who went on to play in the minors and majors. He played little league in South Lake Tahoe and then went on to play at Douglas High School and next to Lassen Junior College. He kept ascending the ranks until he reached playing for the Phillies. 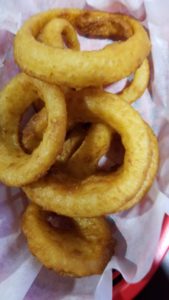 One ring to rule them all. Image: Kyle Young

He recounted playing in the outfield for much of his career and then the anxiety and excitement he felt when he got tapped to pitch. “My sophomore year I got drafted by the Phillies as an outfielder. My third-year kind of got into a numbers game. You know in the minor leagues you have … 5-7 teams … Well, if you have 4-5 outfielders per team, that’s 30-35 outfielders. So, when they start projecting your age, your abilities, who’s up above you, it starts coming into a number’s game. They knew I had a good arm. So, my third year in Spring training they said they wanted to give me a chance at pitching,” said Newell.

He went on, “I remember one year in Spring training we were sitting there, and right after lunch, they said we’re going to get you on the side mound. The president of the Philadelphia Phillies, Bill Giles, is there and all the coaches from AAA on down are sitting there looking at me throwing. I hadn’t pitched for three years almost since college. It was more out of necessity even though I was the number one or two starter in college. When you haven’t been on the mound for a while, it’s just like coming in here and hitting softballs. It’s like, okay, there’s something different here.”

He continued, “I’m feeling like, “Oh my God, you know, my job’s on the line here,” … Well, it went very well. It was like I never skipped a beat. I got called into the office and they said I was going to be an opening starter in single-A.” It was two years later that Newell got a ticket into the big leagues. A year after that, he blew his shoulder out.

As a rookie journalist (I use the term lightly), I get the opportunity to speak to people from all walks of life. I’ve interviewed entrepreneurs, chefs, magicians, ranchers, cowboys, famous musicians and now a former MLB player. Listening to Newell recount some of his experiences in the baseball world was incredible. He talked about the feeling of walking up to the mound in front of 20,000-30,000 people for the first time. He said it’s difficult to describe exactly what that’s like. To the outside world, the pitcher looks calm and collected. Internally, though, you’re just trying to remember which direction to the throw the ball. “For four of those years, it was like top of the game, of feeling like I belonged. Feeling like I was supposed to be there,” Newell said.

After Newell retired from pro ball, it took him some time to explore other careers to see what appealed to him. Jobs like roofing and coaching had their draws, but they weren’t quite right. Eventually, Newell found a place that felt right with Carol and Skender Brame. The Brame’s opened Grand Slam USA in 1987. Newell started working for them in 1994 as a private baseball coach. When difficult parents made coaching a little less desirable, Newell asked to work in the kitchen. He enjoyed the unpretentious but especially well-made food. In 2002, Newell and his wife assumed ownership of the legendary establishment. The Newell’s changed the location, but the outstanding food and service carried forward.

Yeesh, Talk About the Food Already

As interested as I am about Newell’s backstory and what it’s like to attain major league skill, I’m confident that those who have zero interest in sports will also enjoy themselves at Tommy’s Grandstand. Again, the food isn’t fancy, but it’s damn good. 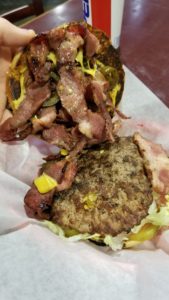 The inner workings of a beautiful machine. Image: Kyle Young

My wife and I purchased two batting cage tokens at $2.75 per token. Each token grants you 20 pitches of slow pitch softball or increasingly faster baseballs. Given our extremely rusty swings, we opted for slow pitch softball. For picking up a bat only a few times a year, we did great.

The burgers get served with mayo, mustard, pickles, shredded lettuce, tomatoes and onion. The buns receive a hearty toast. This detail, at least for me, makes a world of difference when it comes to texture and flavor. The beef patties themselves are thin and well-charred. I can appreciate a medium-rare lamb burger with aioli and other gourmet-type accoutrement, but in my heart of hearts, a satisfying burger only needs a well-charred patty, American cheese and a toasted bun. Tommy’s delivers an exceptional classic cheeseburger, and if you’re craving a little extra salt, order the pastrami cheeseburger.

The pastrami arrives on the burger in thin, charred ribbons. The pastrami adds great texture and salt. If you’re into a small kick as I am, go for the jalapeños, too. The jalapeños and pickles deliver just the right amount of acidity and kick to round out an already great burger.

The onion rings, too, are some of my favorite in town. They are fried to a beautiful golden brown using batter that adheres well to the onions. They use the whole onion, so you get the pleasure of eating rings of various sizes. I enjoy a nice clean bite out of a large, freshly fried onion ring, but if I’m honest, I like the bite-sized nuggets better. We dipped ours in ketchup like good Americans.

Before we left, my wife had the savvy to ask Newell what his favorite things are to eat in his restaurant. He said he eats the cheeseburger, pastrami burger and Reuben nearly weekly.

Tommy’s is a well-kept burger and baseball joint, dipped in Americana, that makes you feel like you have a place to belong.

Visit Tommy’s Grandstand at 830 Meredith Way, Sparks, NV 89431. Give them a call at 775-355-7323. It’s a small kitchen, so if you’re arriving in a big party, call ahead. Visit them online at http://tommysgrandstand.com. Current operating hours (June – January) are Tuesday through Friday from 11 a.m. to 9 p.m. and Saturday and Sunday from 10 a.m. to 5 p.m. They are closed on Mondays. Note that the kitchen closes 2 hours before the final close time every day. 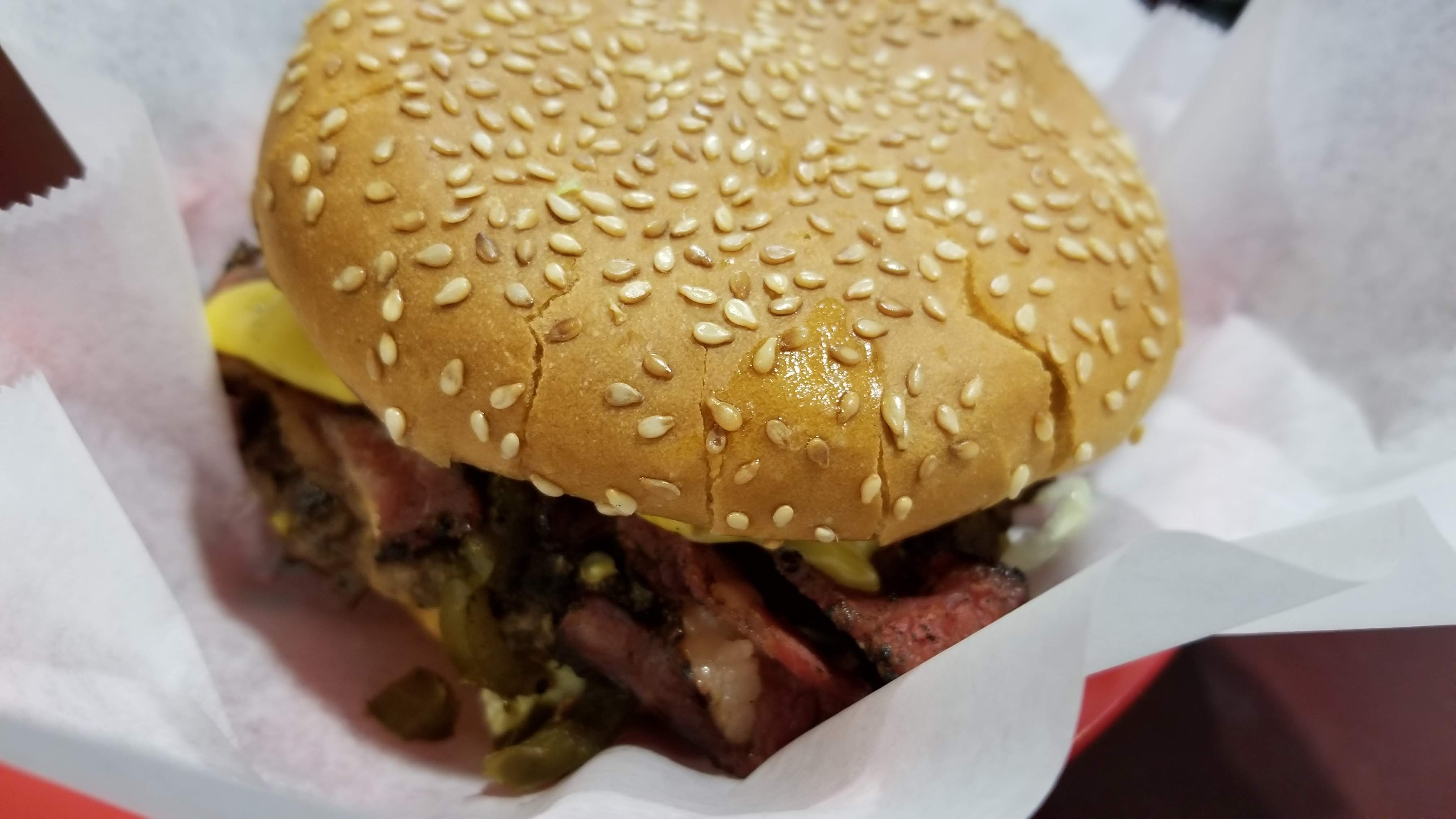 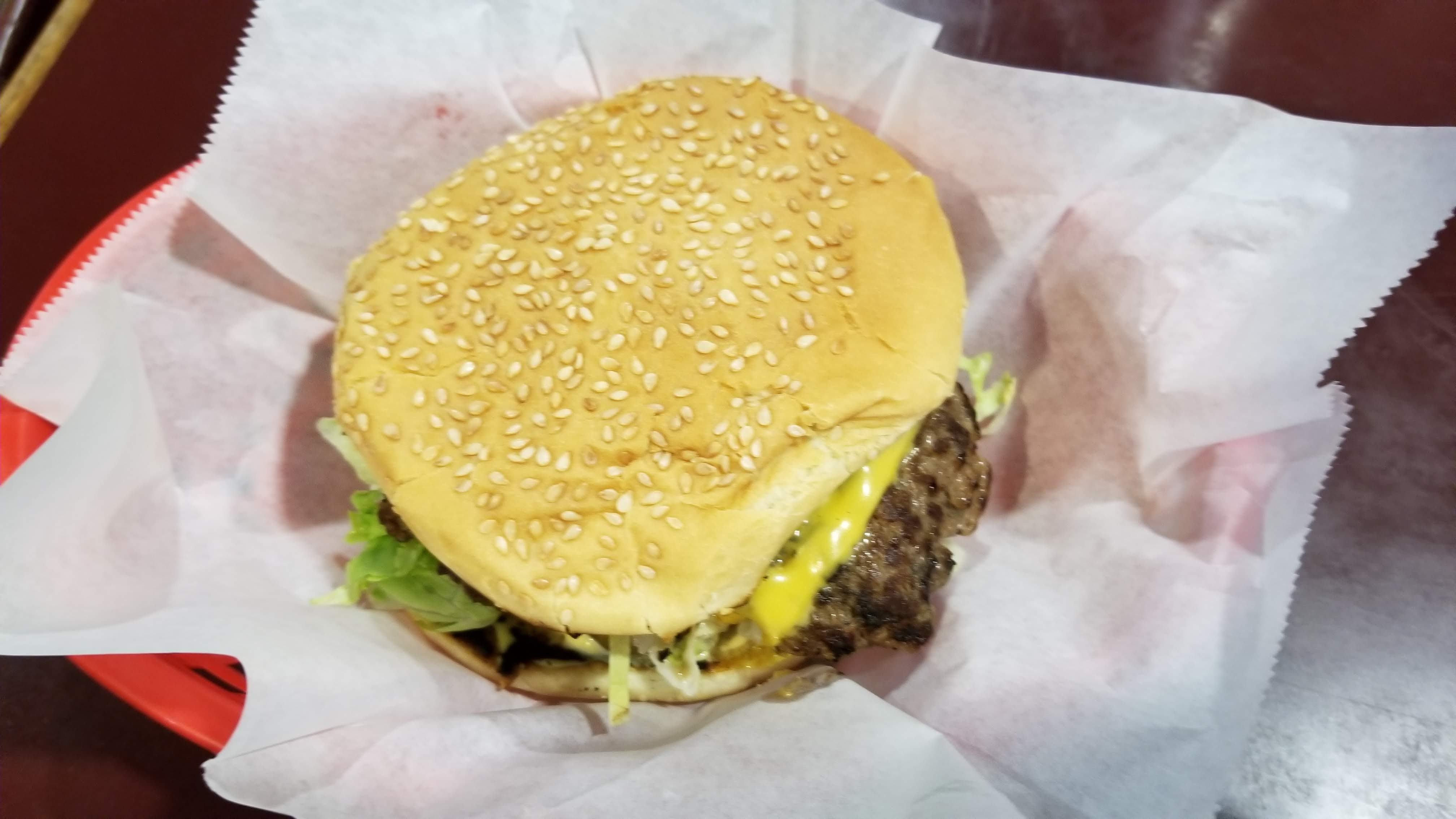 One ring to rule them all. Image: Kyle Young 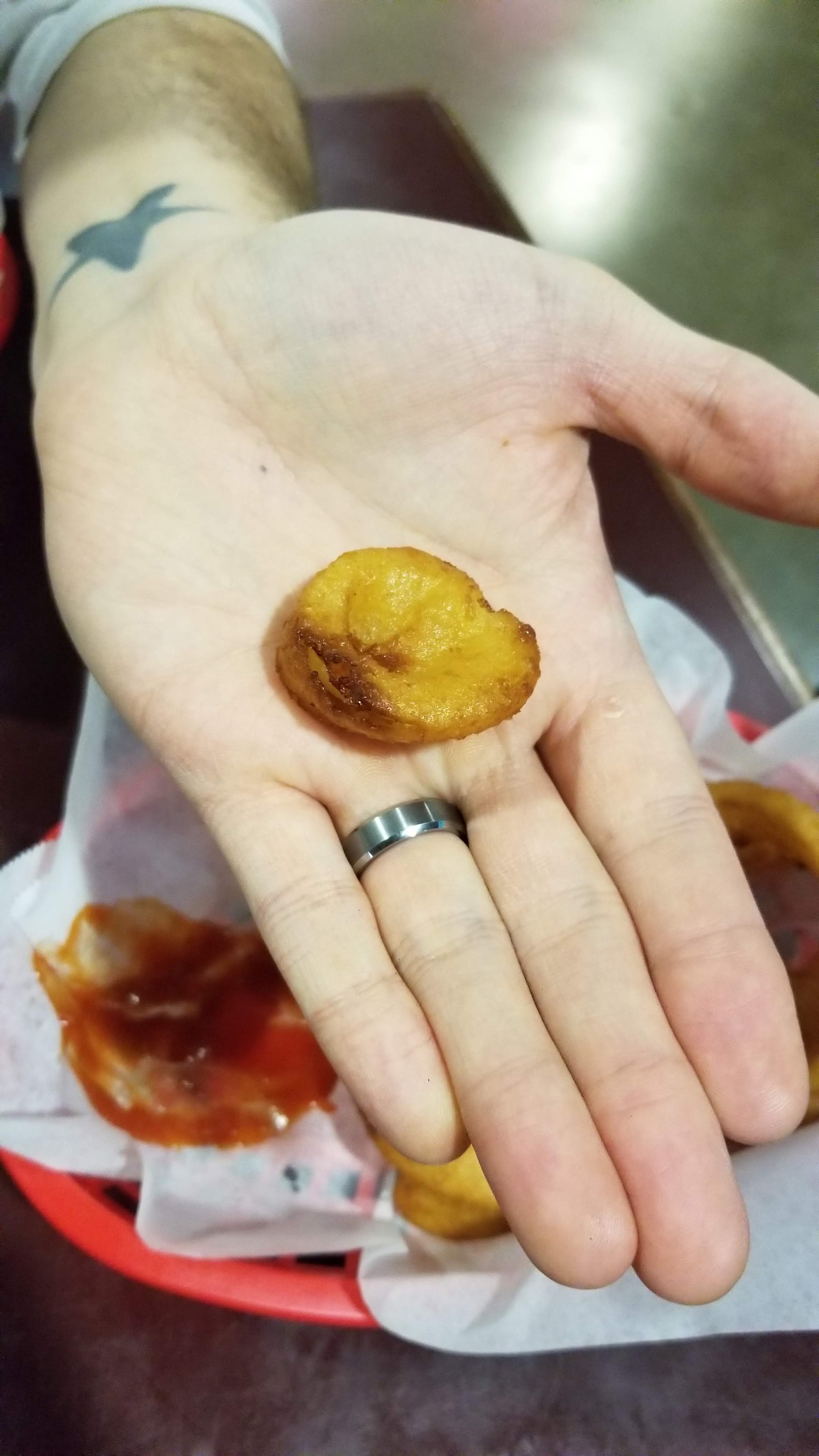 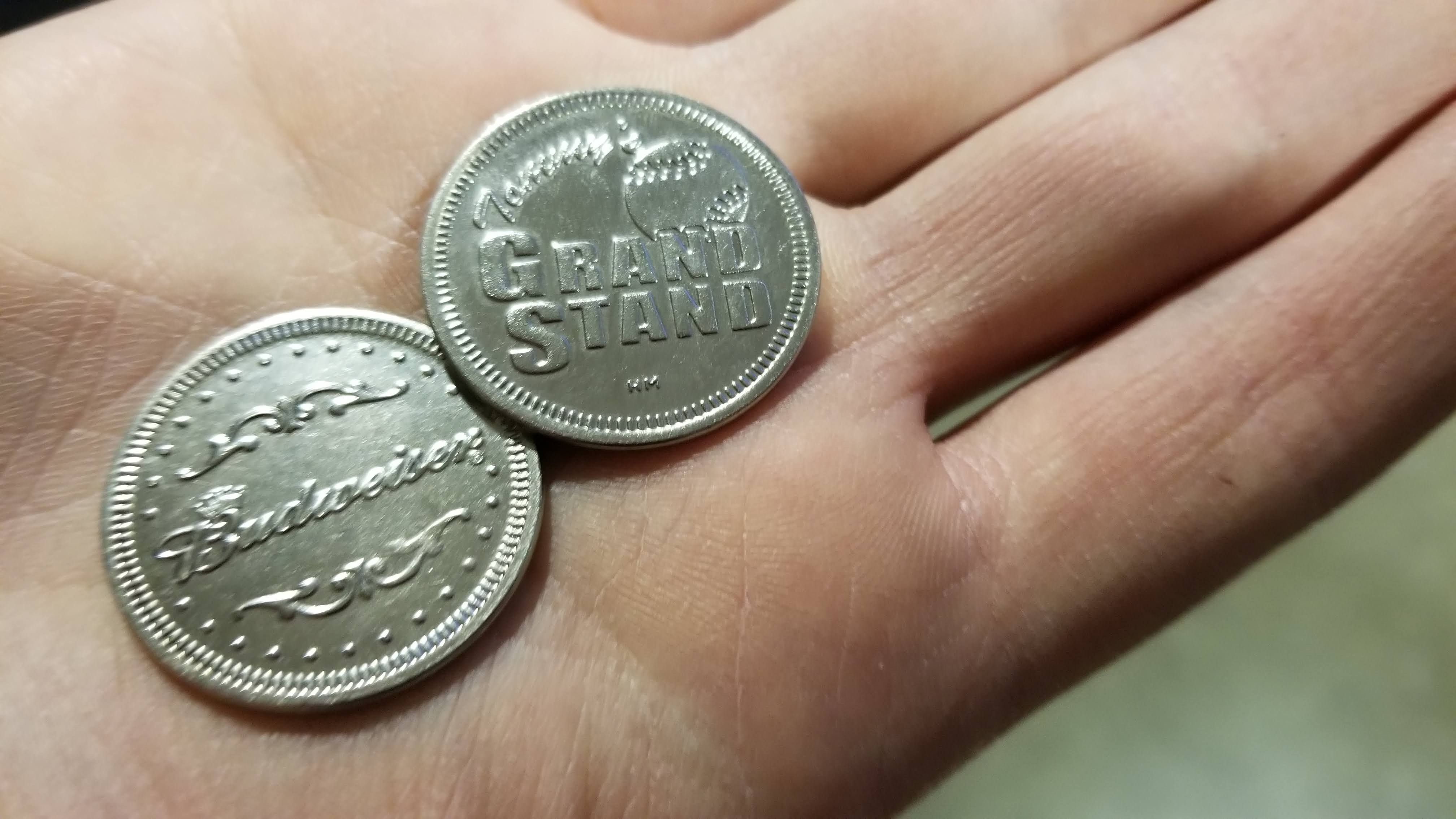 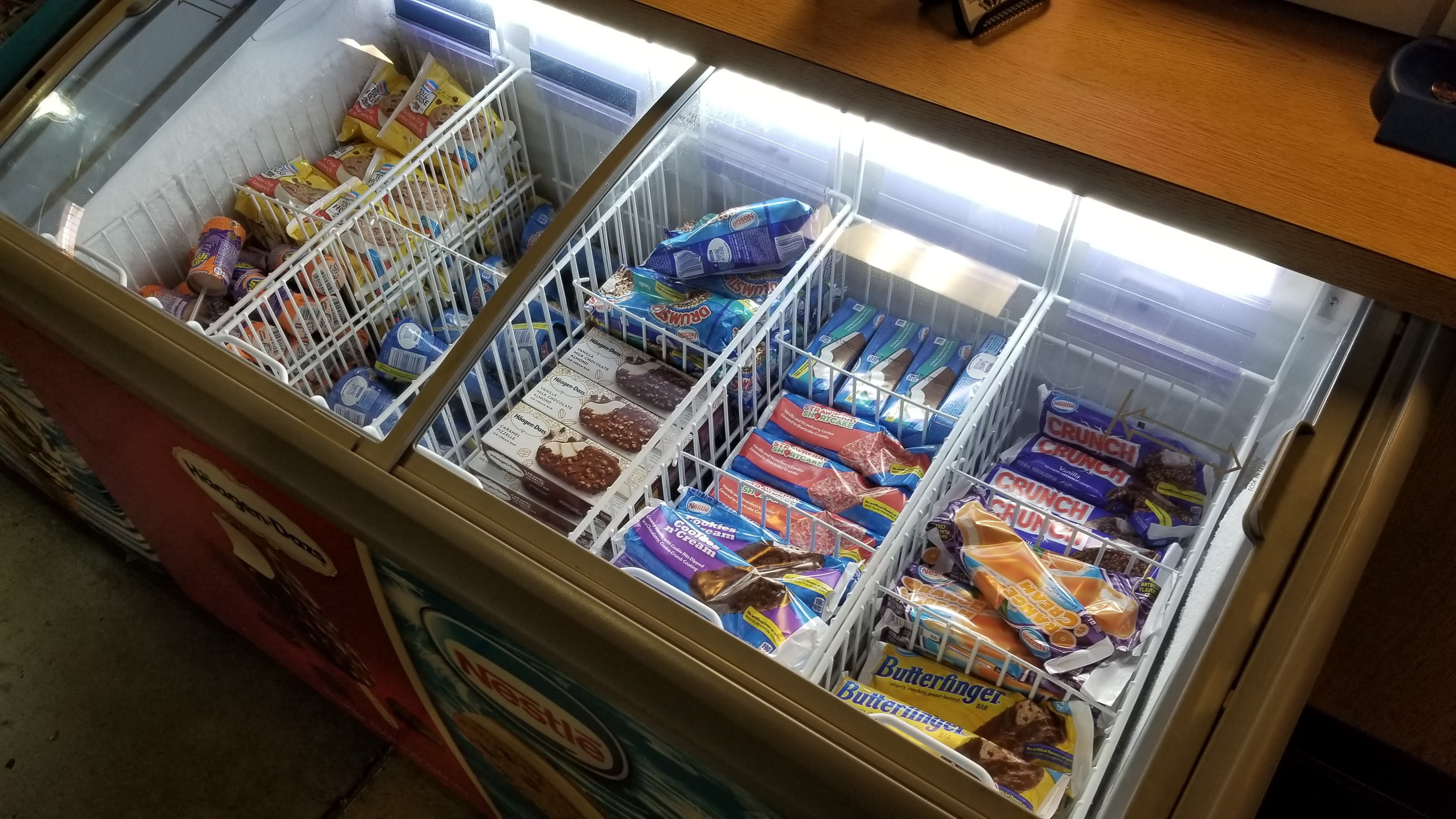 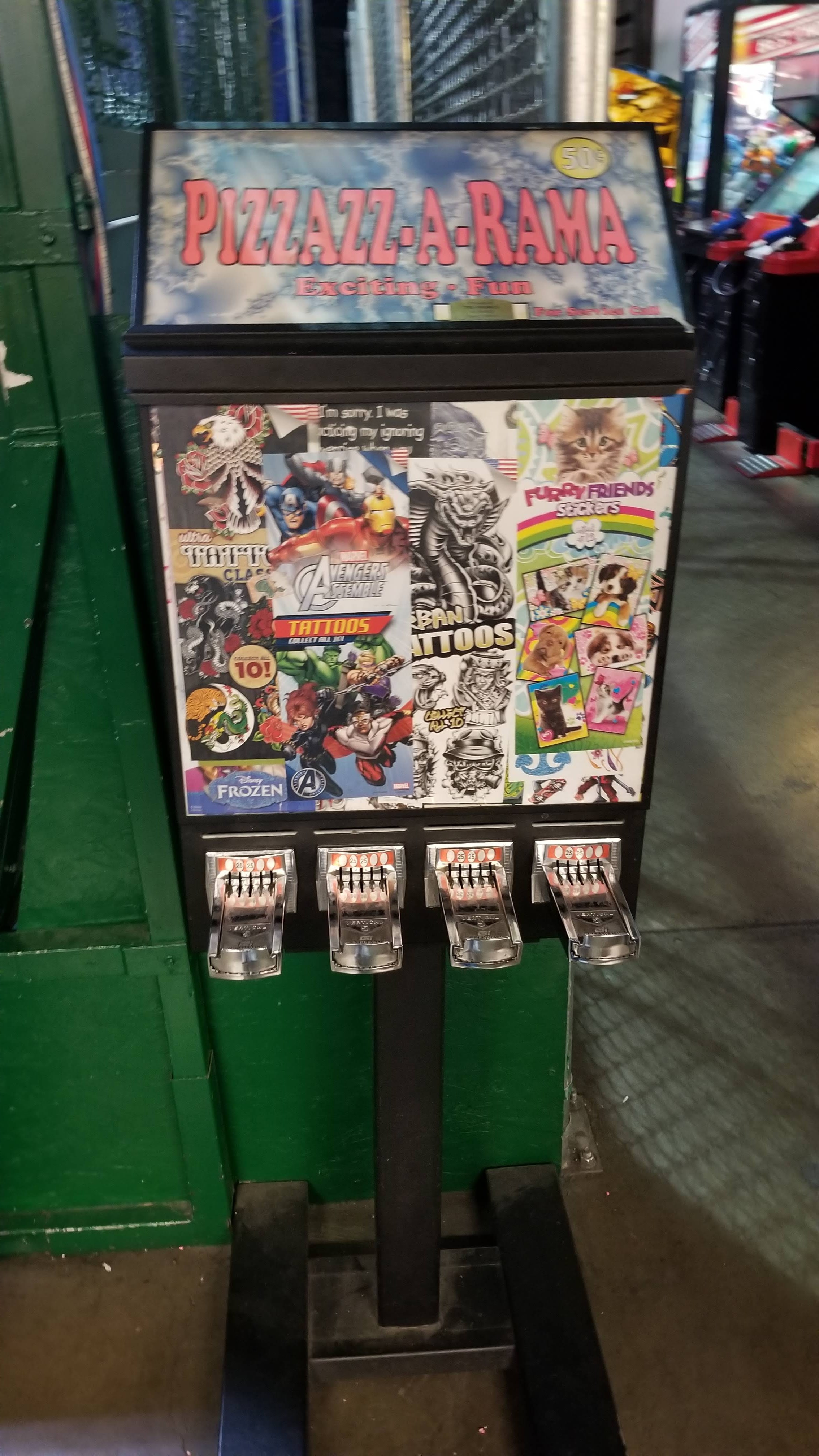 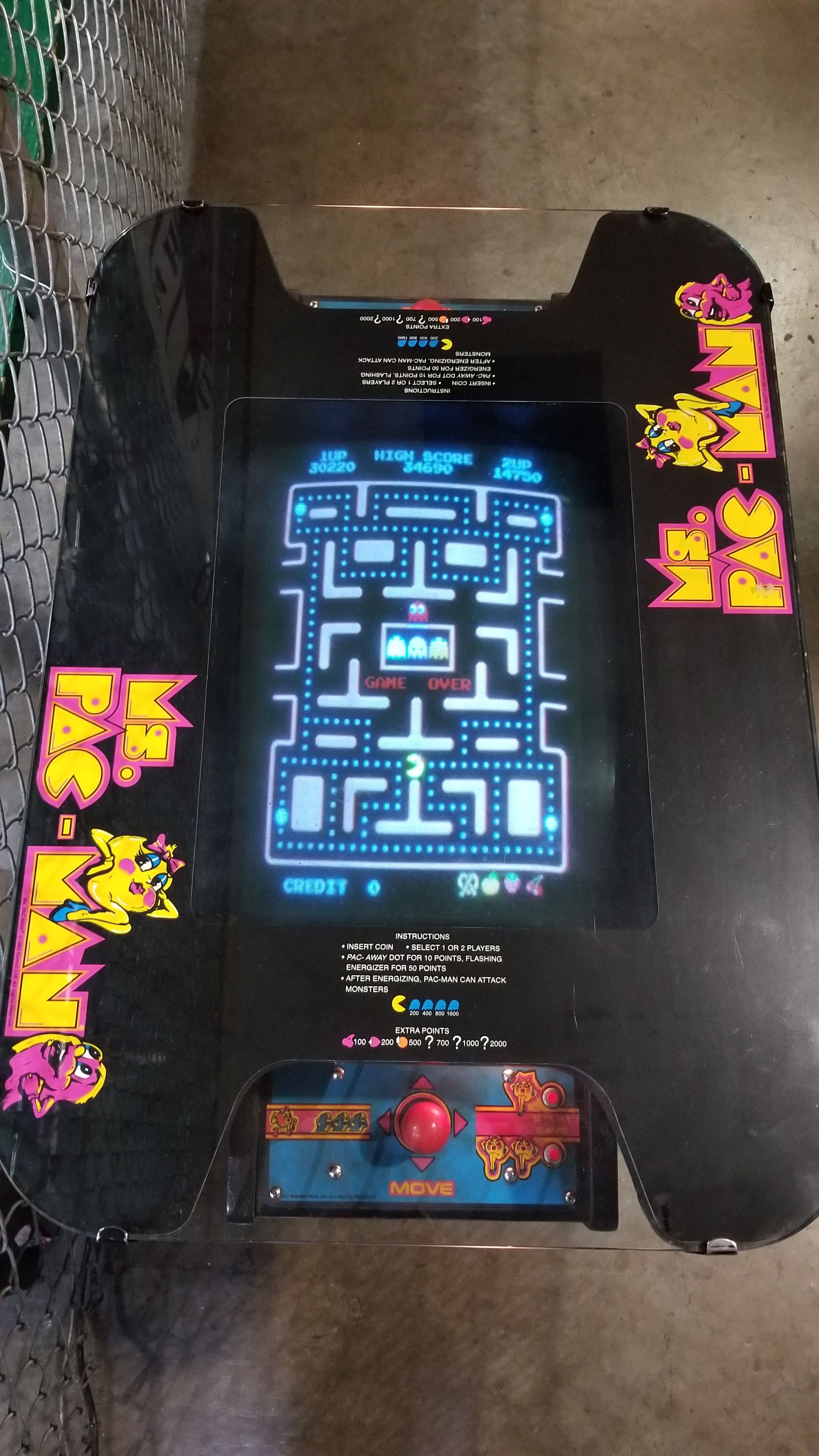 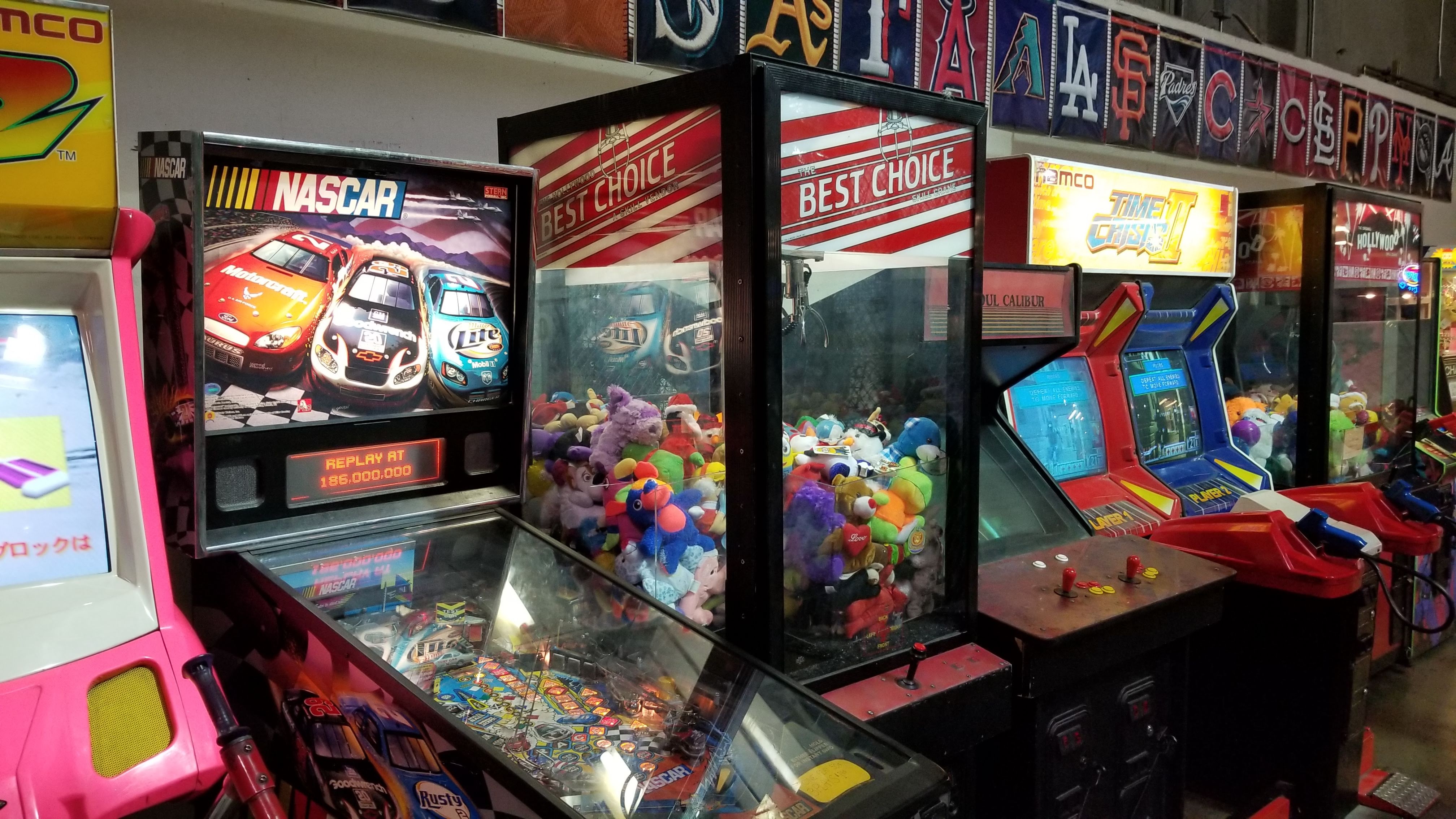 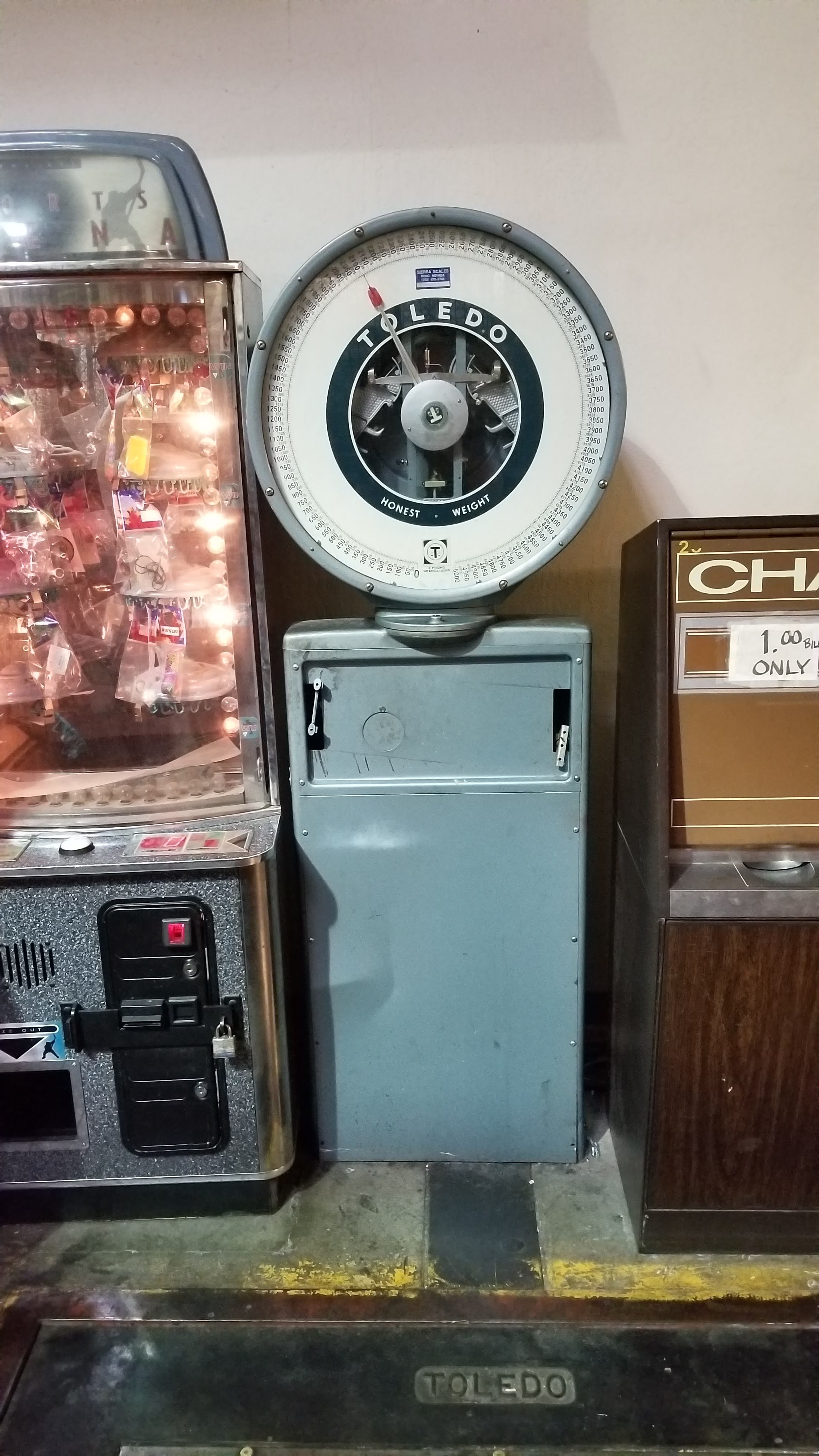 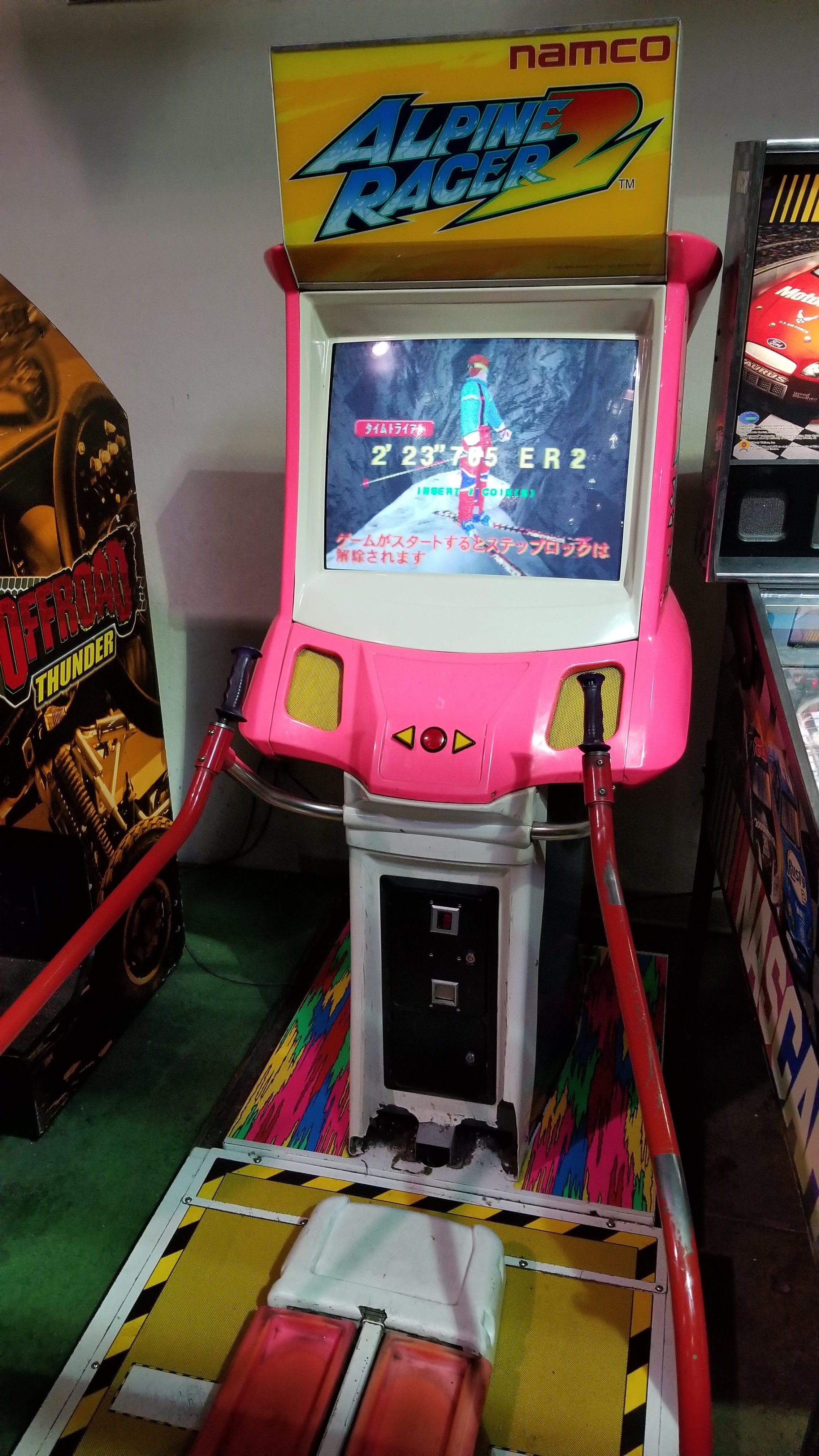 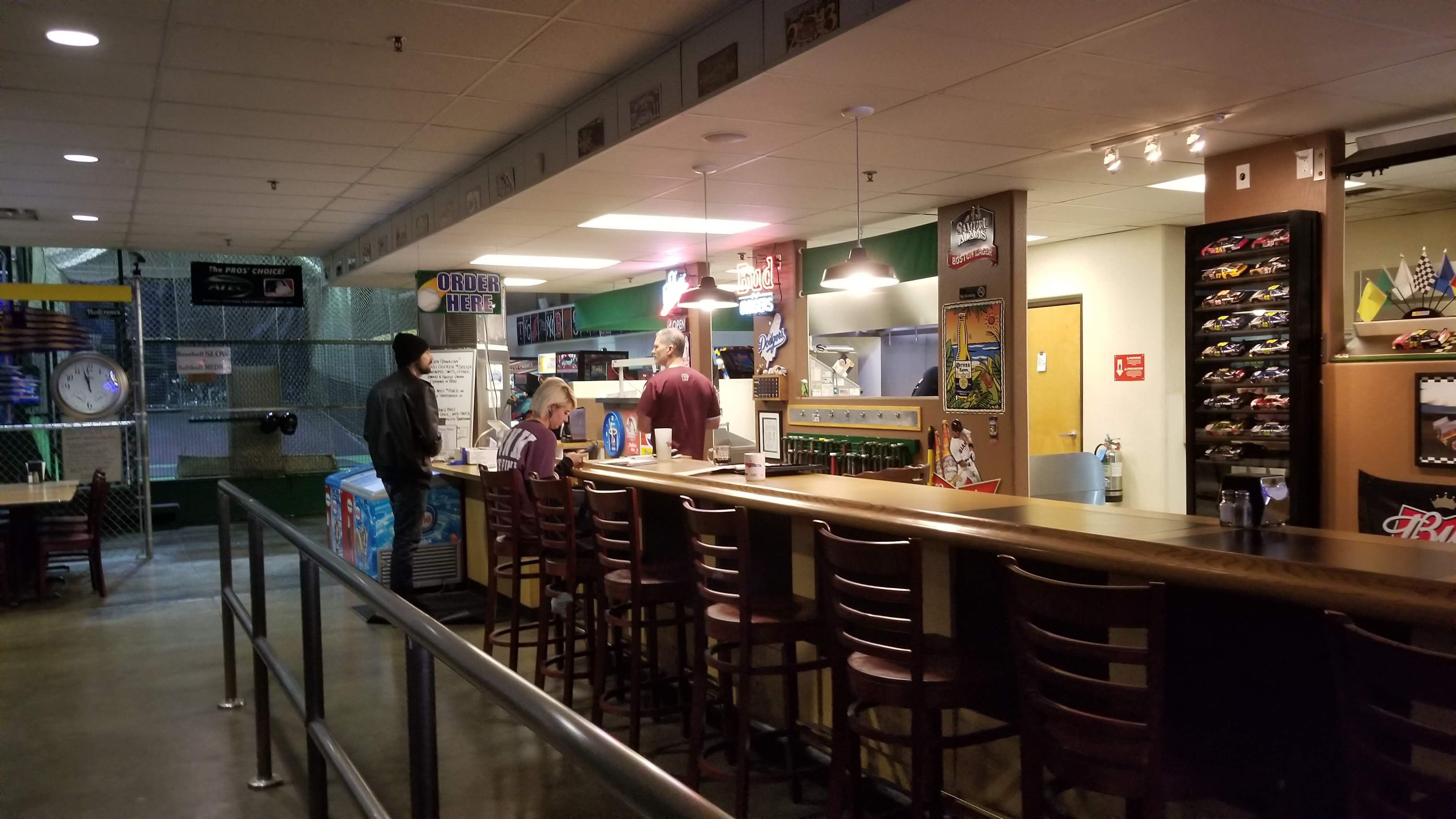 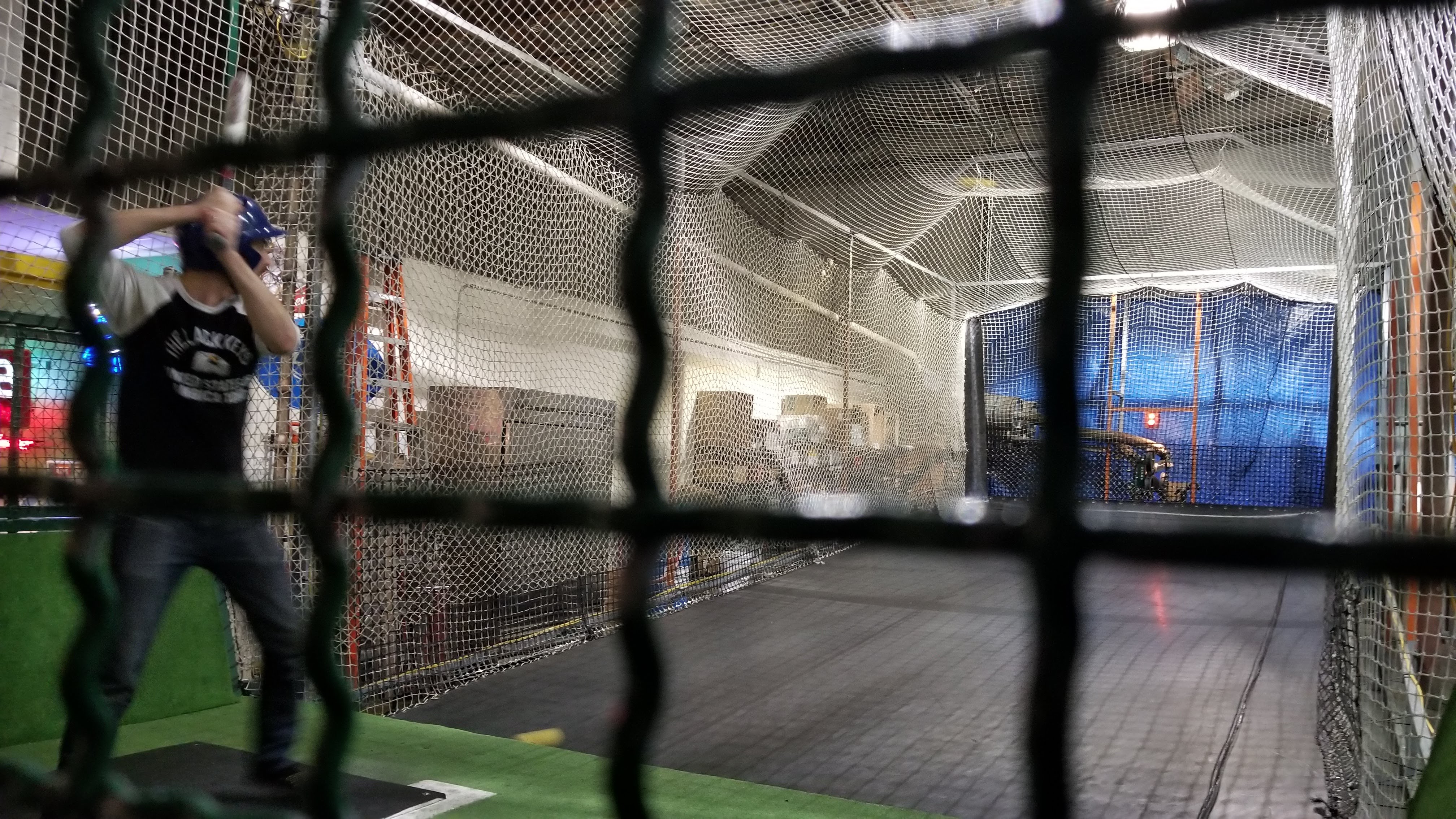 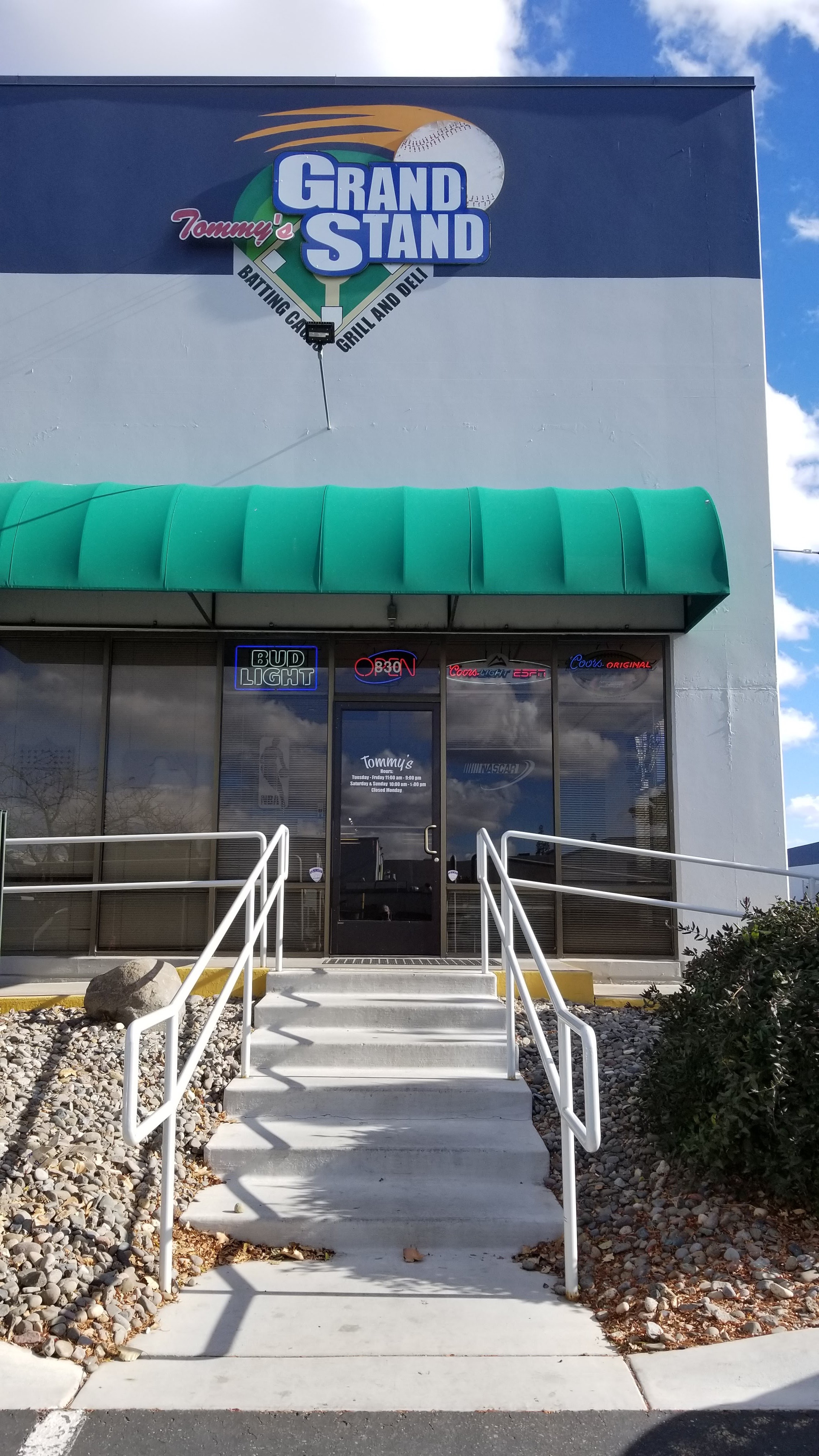