The Floyd Comes to Carson 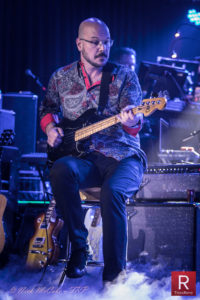 Last April the The Floyd had its ninth sellout show in a row, and their third consecutive sellout at Cargo.

This is one of the best Pink Floyd tribute bands that you could ever hope to see. With them being home town boys (and girl) that gives us all that much more to brag about. They belong to the Reno / Carson City community.

Seeing as how they sold out Cargo in Reno three times in a row, they are bringing their show to a larger venue this time. This Saturday, October 13th, they will at the Carson City Community Center in the Bob Boldrick Theater, and there are still some seats left.

The thing that most people don’t know is what it takes to get this show to the stage. It requires six musicians and six or more dedicated and skilled technicians and crew who also put in long hours before during and after each show to pull it off.

Additionally, it takes a lot of coordination and hard work to load up, transport and set up the stage. Sound checks have to be done. Lighting has to be properly set up. All systems need to be checked to be sure they are ready to go. This is typically done the day before the show, depending on the availability of each venue.

Many may not realize during the show there’s a sound technician running the sound, a video tech carefully timing the video clips on their proper cue, a lighting tech running the lights, a laser tech, a full-time stage manager and many others behind the scenes. Then after the show it’s all got to come down and get take back to home base.

The Floyd is well known for their precise and soulful musical performance, as well as their intense laser/light show and quadraphonic sound. The family friendly two hour show is a treat to the ears and eyes of any generation, and spans 20+ years of Pink Floyd music. You won’t want to miss this rare and unique event.

‘It’s been a minute’: Cargo Concert Hall to reopen in...

Jazz Orchestra Hosts ‘A World of Joy’ Performances For Holidays