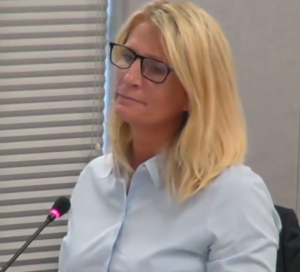 Trina Olsen spoke at the district’s board of trustees meeting on July 24, 2018. She encouraged board members to fix what she called a broken investigative process in the Washoe County School District. She was fired by Superintendent Traci Davis two days later — after being on paid leave for about a year.

The Nevada Department of Employment, Training and Rehabilitation (DETR) denied last week the Washoe County School District’s appeal of an unemployment claim filed by an administrator recently fired from the district.

Trina Olsen, who is fighting for her job, alleged that her firing from the district did not follow district procedures and violated due process rights. ThisisReno covered her firing in depth last month.

Upon being notified, twice, of her termination–more than a year after the district started taking steps to fire her–Olsen filed an unemployment claim.

The district, however, appealed the claim after it was approved by DETR.

Olsen denied the charges. She said her actions were made with the best of intentions in mind for the district’s students and staff. The emailing of testing information was at her principal Lauren Ford’s direction and approval, Olsen maintained.

The state found in her favor on the unemployment claim.

“During the hearing, the claimant denied all the employer’s allegations. It is important to note that as the testimony was one-one, and as the courts in almost all jurisdictions have held that the Unemployment Compensation Act should receive liberal or broad construction in favor of those claiming benefits, this tribunal gives the benefit of the doubt to the claimant.

“Therefore…this tribunal finds that the claimant was discharged for reasons other than misconduct in connection with the work, and benefits should be allowed.”

Olsen is going through an arbitration hearing with the district later this week over her firing.

“I have to pay a ton of money to fight for my career,” she said. “It’s financial bullying.”