By Don Dike Anukam Published: September 5, 2018Last Updated on January 10, 2020
John O'Connor, 48, is in custody for a Fallon church shooting in which one died and another was injured. 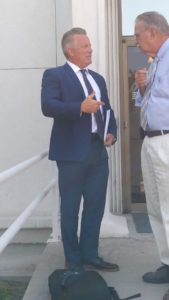 FALLON, Nev. — Fallon church shooter John O’Connor was deemed by a court yesterday as not meeting mental health competencies to stand trial for allegedly shooting two people, one of whom died.

University of Nevada Psychiatrist Dr. Steven Zuchowski conducted a psychiatric evaluation of O’Conner to determine if he was competent to stand trial. 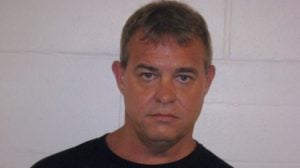 John O’Connor, 48, is in custody for a Fallon church shooting in which one died and another was injured. Image: Churchill County Sheriff’s Office.

“He believes he’s not going to come to trial and that it will all go away,” he added. “He could not comprehend that the proceedings were serious and about the potential for him to receive a severe sentence.”

These criteria mean that O’Connor does not meet the competency criteria to stand trial — however, his attorney Richard Davies said that O’Connor will become competent with treatment in about 90 days.

Zuchowski said that O’Connor believed he was under the control of the victim, Charles Miller, who died from the July 22, 2018 shooting at the Church of Jesus Christ of Latter Day Saints. Another person, who was also shot, survived the incident.

The judge ruled that O’Connor was incompetent to stand trial at this time due to an answer on the third prong on a three-prong question.

Another competency hearing will be held later to determine whether O’Connor can ultimately stand trial.

Suspect in Custody After Deadly Church Shooting in Fallon (Updated)