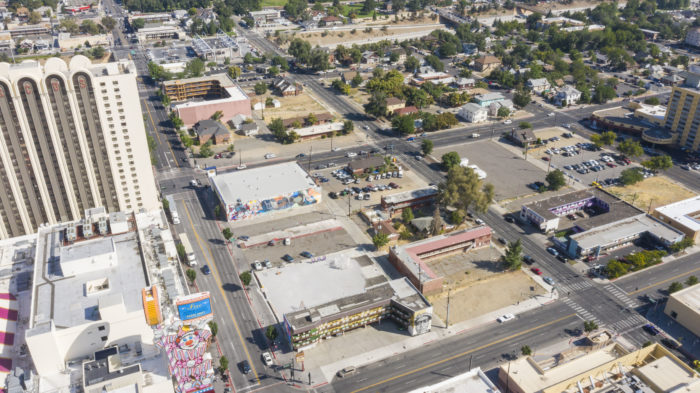 Dickson Commercial Group (DCG) presents one of the largest contiguous land assemblages for sale in downtown Reno, a mixed use developed called Virginia/Center.

“This is an attractive, solid footprint for the continued redevelopment in downtown Reno,” said Tom Fennell, CCIM of Dickson Commercial Group. “We believe the project will encourage redevelopment on surrounding streets because it is one of the last contiguous blocks available in the downtown area.”

Directly to the north of the property, University Housing Group has closed on and is beginning construction of Canyon Flats, a six-story, 158-unit student housing complex that will house more than 500 university students. It will feature a 24-hour fitness center, a coffee bar, study rooms on each floor and a rooftop pool. Directly to the southeast of the property is the Reno Events Center, a 7,000-seat multi-purpose arena for events that range from top-notch entertainment to a variety of special events, conventions and conferences.

The property is listed at $6,734,400. Tom Fennell, CCIM, Dominic Brunetti, CCIM, Scott Shanks, SIOR and Harvey Fennell from DCG are the brokers on the project.