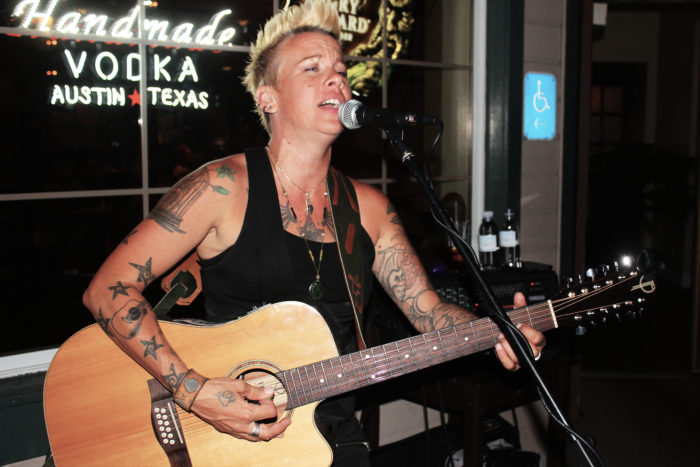 Local Band Alert: ThisisReno takes a closer look at local bands in this series of 5-minute interviews. This week we chat with Athena McIntyre.

Local singer-songwriter Athena McIntyre calls herself the “gurl with a guitar” thanks to a decade of musical performance under her belt. She’s played or been featured at a variety of events and venues including Artown, The Knitting Factory, NadaDada, Whiskey Dicks, America Matters Radio, Race for the Cure, the Nevada State Fair, and Whiskey A-Go-Go.

McIntyre has also opened for or shared the stage with The Novelists, Taproot, Montgomery Gentry, and Reno’s own Whitney Myer. Recently she was a double headliner with Ian Moore for the Levitt Amp Carson City Summer Concert Series at the Brewery Arts Center.

Recently I got to ask McIntyre some questions after a show in Lake Tahoe, and this is what she had to say: 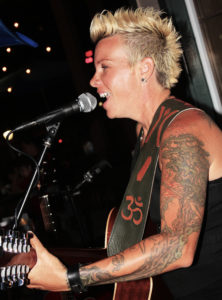 McIntyre: My music is acoustic folk.

TIR: Who are you most inspired by?

McIntyre: I’m most inspired by those who keep getting up, dusting off, and fighting for what they want in life.

TIR: Where do you see yourself in five years?

McIntyre: Just recently playing in Carson for the Levitt concert series – 300 people singing with me.

TIR: Tell me what YOU think of the Reno music scene?

McIntyre: Not sure how to answer this.

TIR: Ok then, what do you think about Reno?

McIntyre: I don’t have an opinion on Reno.

TIR: Ok, we’ll just leave it at that.

I first met McIntyre about eight years ago when she fronted a really good band called Workin’ Manerva. We met at the Alley (now Mummers) or maybe it was Jub Jub’s. I knew then she was going places, she may not be there all the way yet, but she will definitely get there.

Be sure to check this gurl out when she comes your way. You can find out where she’s playing next on her Facebook page at https://www.facebook.com/AthenaMcIntyreMusic/.

And like I always say, support your local bands and venues … Go to a Show!