Homeless, Advocates Respond to Sparks Sweep of Camps Along River 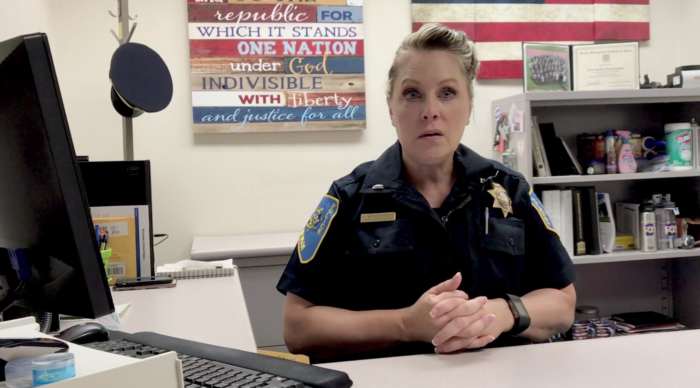 The City of Sparks is touting its homeless sweep along the Truckee River as a success.

A video posted Monday on Facebook featured Sparks Police Lieutenant Greta Woyciehowsky outlining what she said was the problem with the homeless along the river — too many people camping, dogs running loose, drugs and needles, bathing and crapping in the river, and massive amounts of trash.

Woyciehowsky said that multiple agencies worked together to make the river “a safer and healthier environment. We’re pleased to report that the bike path has been cleaned of all trash and camps.”

She promised that the homeless sweeps will be a work in progress, something the city will continue to work on.

“One of the other concerns was the amount of trash that was starting to pile up,” Woyciehowsky explained. 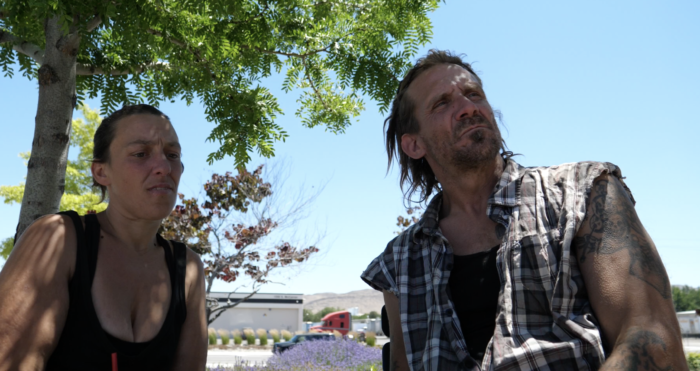 Cheryl Edwards, left, and Terry Audiss said they were forced to move from the Truckee River in Sparks after the city initiated a clean-up and sweep. They said they just moved to another spot on the river outside of Sparks city limits. Image: Bob Conrad.

Homeless advocates dispute the efficacy of the city’s actions. Jennifer Cassady with the Reno Initiative for Shelter and Equality (RISE) pointed out what ThisisReno reported before the sweeps — services are limited.

“There are no resources in town, so I’m not sure which ones you pointed them to,” she posted in response to the City of Sparks video. “We all know the shelters are overflowing and the animal services only take away these precious family members and sell them. These are our neighbors and we should treat them as such.”
Sparks spokesperson Julie Duewel responded: “We worked diligently with Washoe County and the Volunteers of America to provide services to those living illegally along the river. Many were offered alcohol and drug, mental health, and shelter services. The Volunteers of America took everyone that accepted these services directly off the river and into shelters.”

Homeless individuals told ThisisReno that Sparks’ actions are actually exacerbating homelessness. Three people said today that, yes, they got kicked out of Sparks proper, but they merely relocated either to Reno or out of Washoe County.

Terry Audiss and his partner, Cheryl Edwards, were living at one location on the river for about a year. He said the sweeps cost him his driver license and birth certificate, which he said were discarded when the city swept the camps.

“They came through with … dump trucks and basically threw away important stuff,” he explained. “I was saving up trying to get us off the river. I’m a mechanic, and I had to save up tools to start working again. They purposefully threw them away even when I asked them not to.

“The resource that they offered, the shelter, was full,” he added. “I could have went there, but I’d have to leave her (Edwards) and the dog. If they would have offered something where we could have gone as a family, yeah we would’ve took it.”

Audiss said he’s still on the river, “just in a different location.” He and Edwards are restarting their lives but now with fewer resources. They said most of those caught up in the sweep just moved somewhere else. Sparks, in its video, said that many rounded up by the city took advantage of the services that were offered.

“They (Sparks) said they didn’t really care where (we went) as long as we were out of their county,” Audiss continued. He said many of the river residents are just like other members of the greater Reno community — there are good and bad actors.

“We’re not camping, we’re living,” he continued. “I don’t have options. I don’t have family. I’m trying to take care of us with the little things we’ve got.”

Video: Pets of those experiencing homelessness get vet care at...