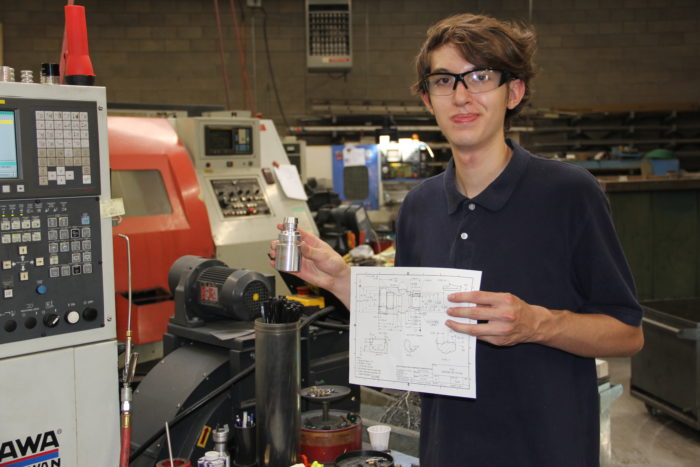 The shop floor is a cacophony of swirling lathes, grinding mill machines and frequent blasts from a water-jet cutter, but it takes more than that to phase Joseph Stevens as he completes his workday at Centerline Machine Works in Sparks.

The Academy for Career Education (ACE) Charter High School 2018 graduate knows a bit about working, and competing, under pressure after capturing the gold medal in CNC Turning Specialist at this year’s SkillsUSA competition held in Louisville, Kent.

More than 6,300 students from high schools and technical colleges from every state in the nation competed at the national showcase of career and technical education. The SkillsUSA Championships is the largest skill competition in the world.

Stevens said he was well-prepared for the competition which was conducted in two parts and had more than 50 competitors, the best from every state. He had to show general knowledge of the machine shop work place including reading blueprints, interpreting mathematical equations and knowing the skills required for each machine shop tool. The second part was building a part  from blueprints provided for the competition.

“ACE gave me the opportunity the other high schools didn’t have, really nowhere else in state,” Stevens said “They have access to the machines, the software and computers. Plus, they work with shops in the area and have a lot of connections in the industry.”

Stevens took the complicated blueprints, impressing not only the judges from the industry, but also his instructor Laure’l Santos who is the Advanced Machining and Manufacturing Technologies Instructor at the Truckee Meadows Community College/ACE Dual Enrollment program.

“The part Joseph programmed at the National Skills Contest was a difficult part with many features such as threading and boring,” Santos said. “I heard that Joseph received the highest mark on his CNC program, including the college contestants.”

ACE High School has two dual credit programs with TMCC which includes the Advanced Machining and Manufacturing Technologies Program, and the Diesel Technologies Program. Each program allows the ACE High School Students to earn 30+ college credits plus high school credits over a three year program. The students can also earn additional college credits through the TMCC Middle College program where they can take additional courses such as Welding, HVAC, and Advanced Manufacturing.

“Currently, there is a huge demand for CNC (computer numerical control) operators, programmers and set-up technicians.  According to the latest statistics, there approximately 400 openings for machining related jobs in the state of Nevada,” Santos said.

Stephen Habegger, owner of Centerline Machine Works, appreciates what he describes as an uptick in the local trades programs throughout the region, but emphasizes its a curriculum which requires skills such as science, math and critical thinking.

“You have to have an understanding what you working with. Its not just pound a nail 5,000 times a day,” Habegger said. “You have to understand how things go together, what its supposed to do and how it gets put together. You have to have a skill set that’s a little more far-reaching than just doing a job.”

Stevens was attracted to the hands-on work the machine shop offers and its level of creativity.

“I like the challenge of making one-of-a-kind, or even antique parts that can’t be found anywhere else,” he said . “We had to do some parts on a WWII shell that was for a museum display, there were no blueprints. That was interesting to be able to do,” Stevens said.

“Machining wasn’t really in my plan from the beginning, he said “But I can earn money to launch another career and it gives me a lot of math and theory that is useful in other areas like CAD and special machine software that is closely related to a lot of other things I might want to pursue.”

Steven wasn’t alone in his pursuit of excellence at the SkillsUSA competition as several other ACE Charter High School students also competed and did well at the competition: