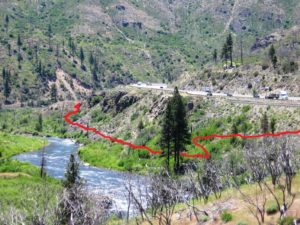 The final section of Tahoe-Pyramid Bikeway from Lake Tahoe to Reno is being constructed in the Truckee Canyon, and the nonprofit behind the trail has changed its name to the Tahoe-Pyramid Trail.

“Many walkers, runners, fishermen and others mistakenly think the trail is only for bicycles,” said Janet Phillips, president and founder of the Reno-based group. “We are more inclusive than that.”

Phillips said the Tahoe-Pyramid route is not paved outside urban areas, but everywhere else, the trail is on a dirt road or path.

“After 15 years as a ‘bikeway,’ this is obviously a big change,” Phillips added. “But we think it is the right thing to do, as we want everyone to enjoy the trail.”

Work has begun on the last segment of trail from Tahoe to Reno. Richard May Construction, of Mammoth Lakes, Calif., recently started on the final two miles of trail west of Floriston, Calif.

At a cost of over $2 million, the project is being paid for by government grants and private donations. It is expected to be finished later this year or early next year. When complete, riders from Reno will be able ride through the entire canyon to get to Truckee and Lake Tahoe.

Phillips said the trail is 80 percent completed. The remaining gaps are east of Sparks.