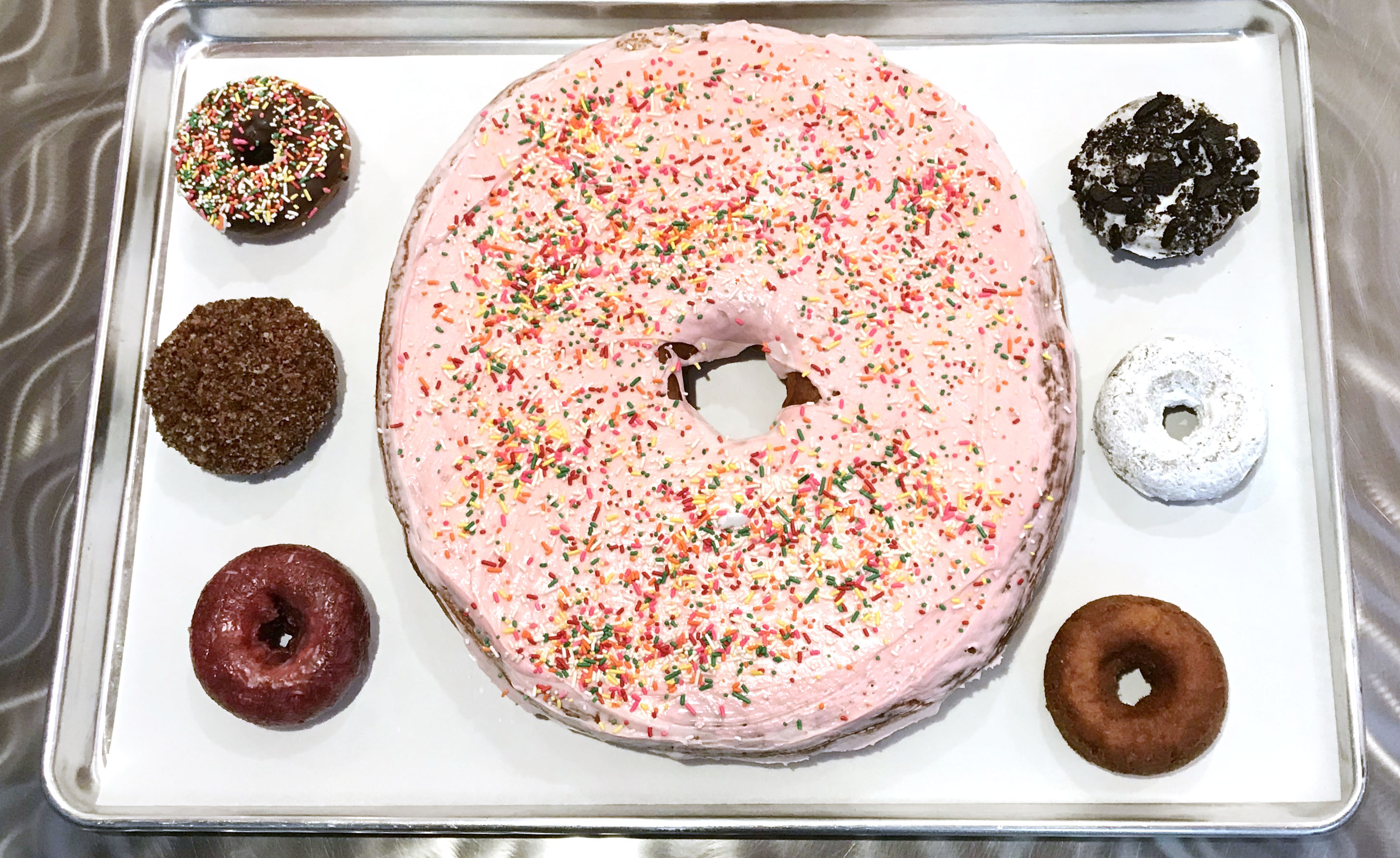 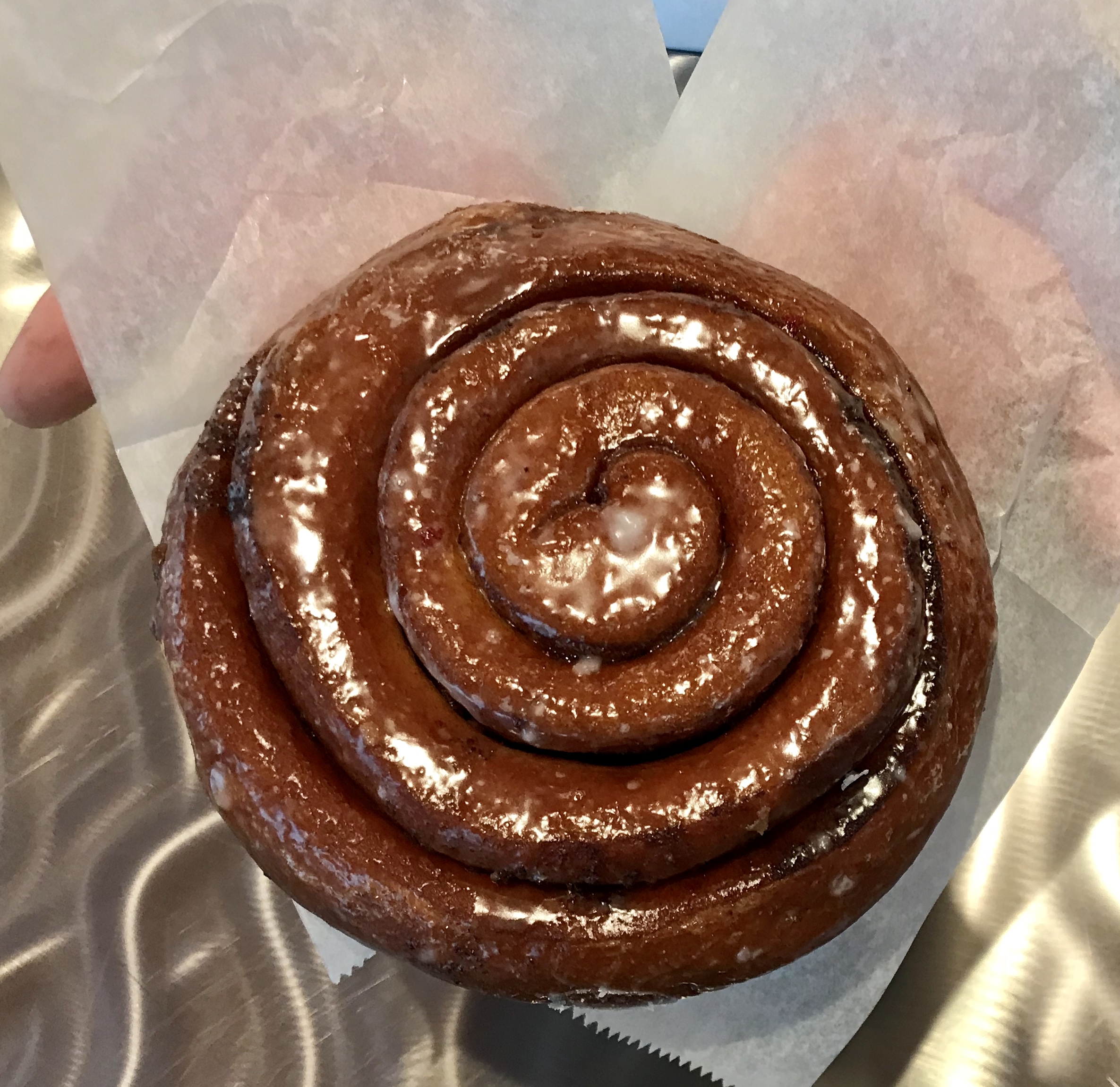 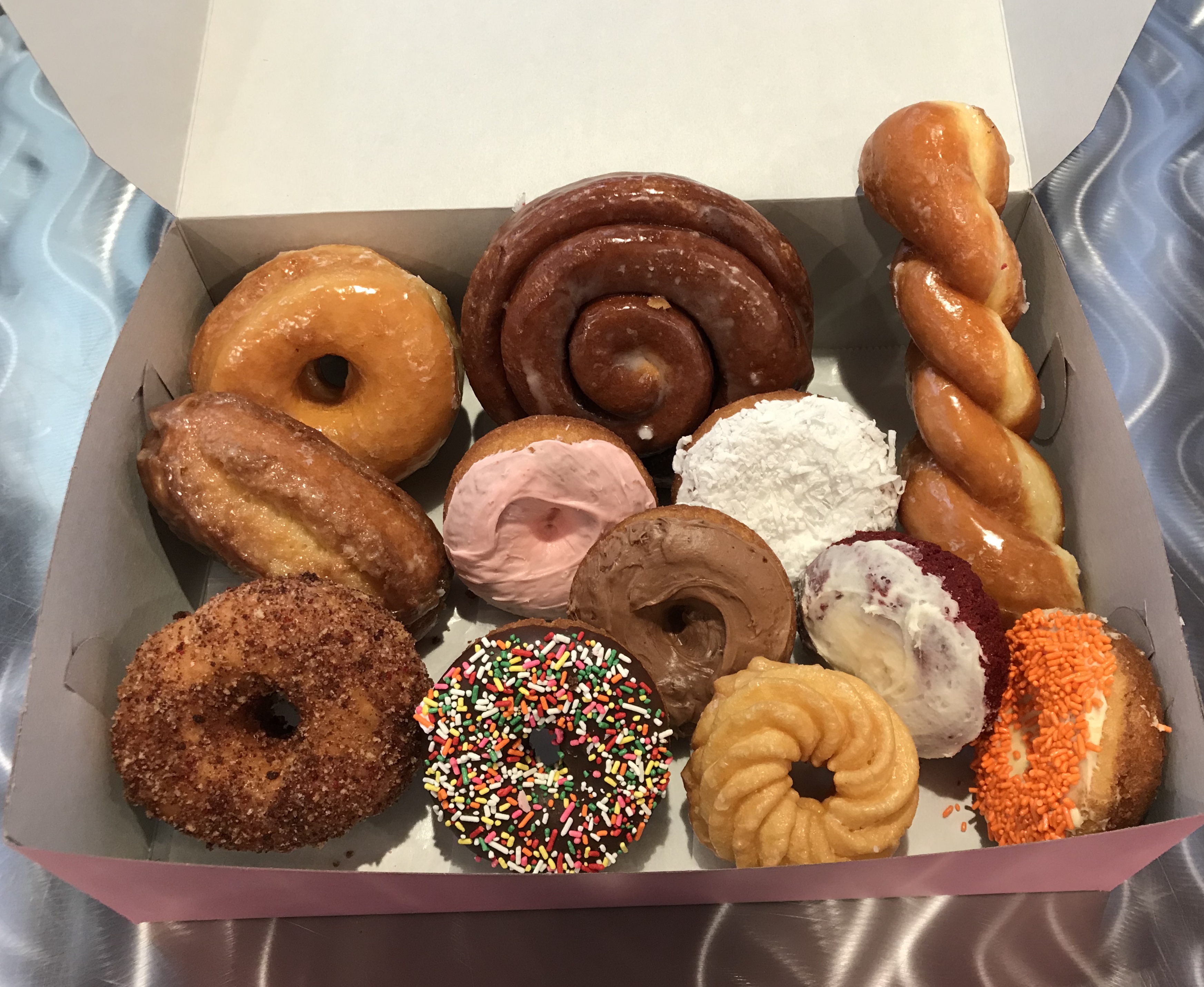 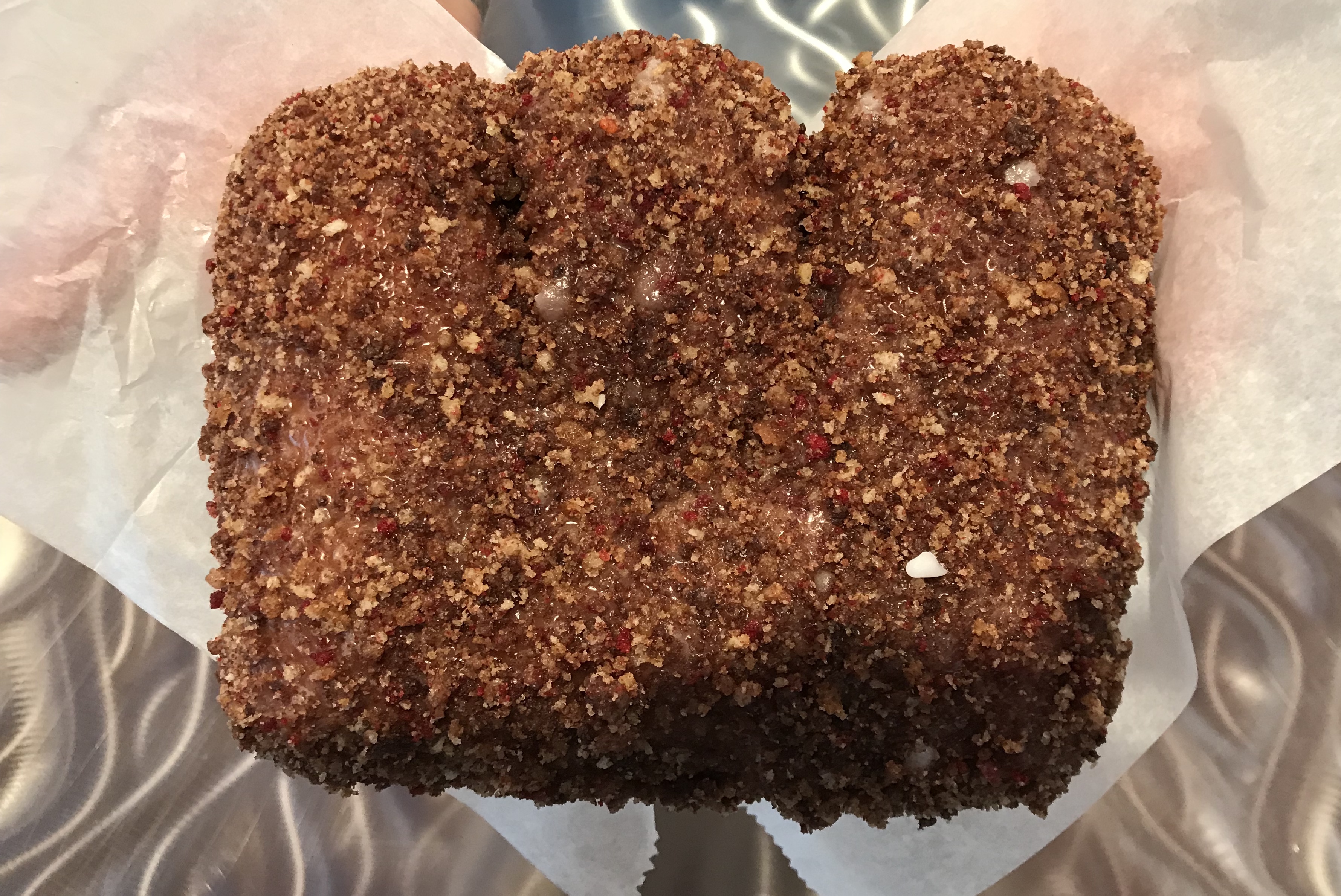 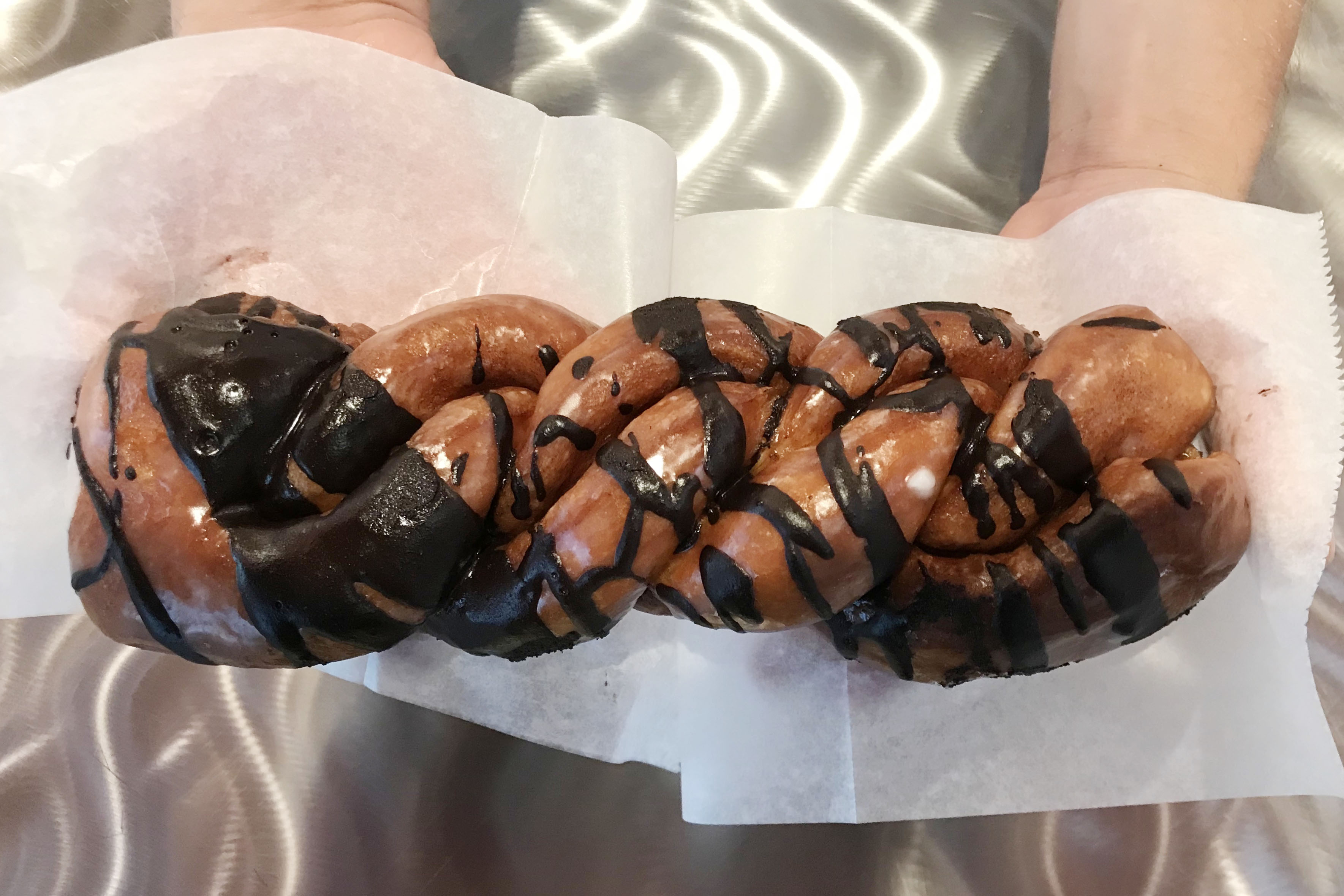 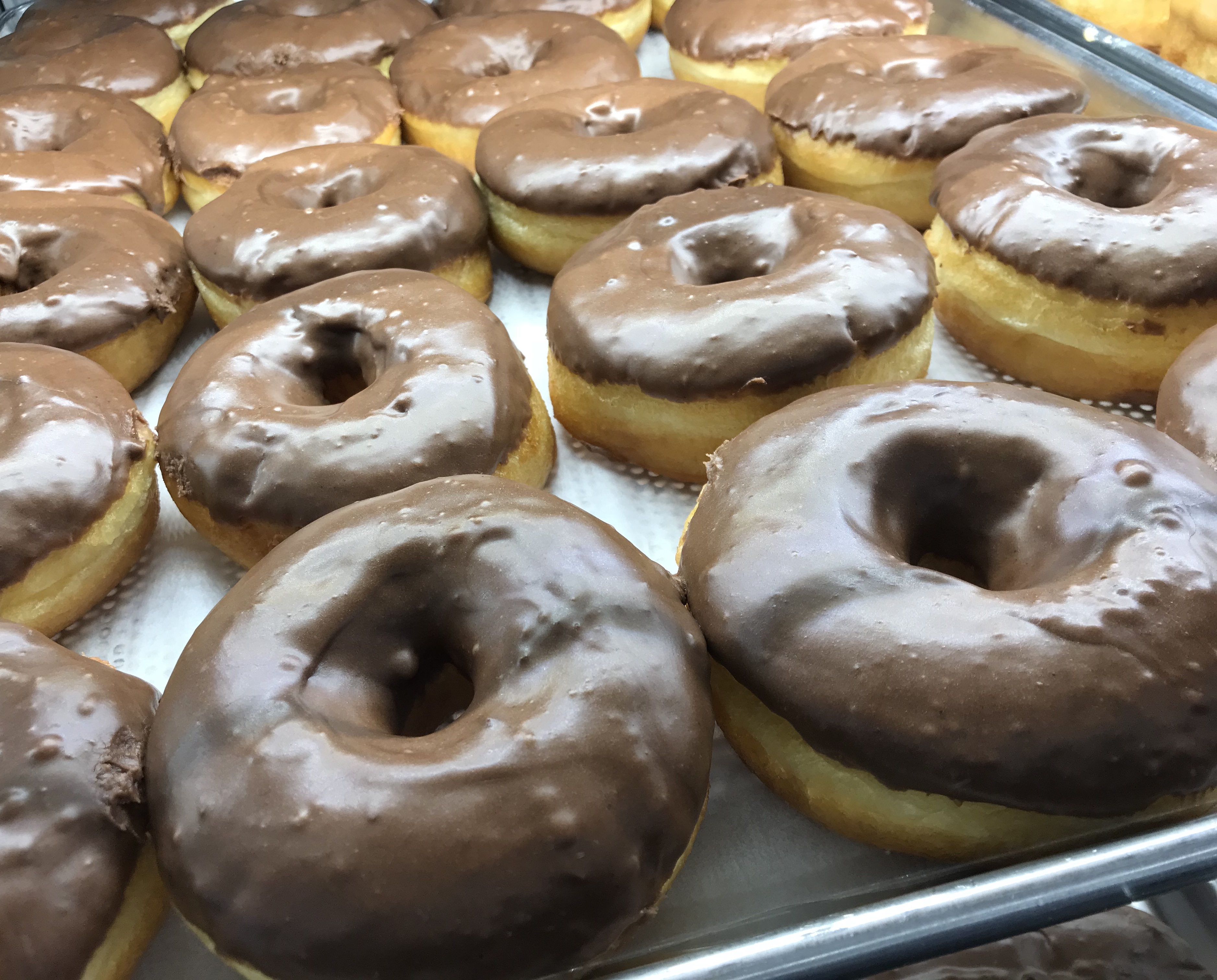 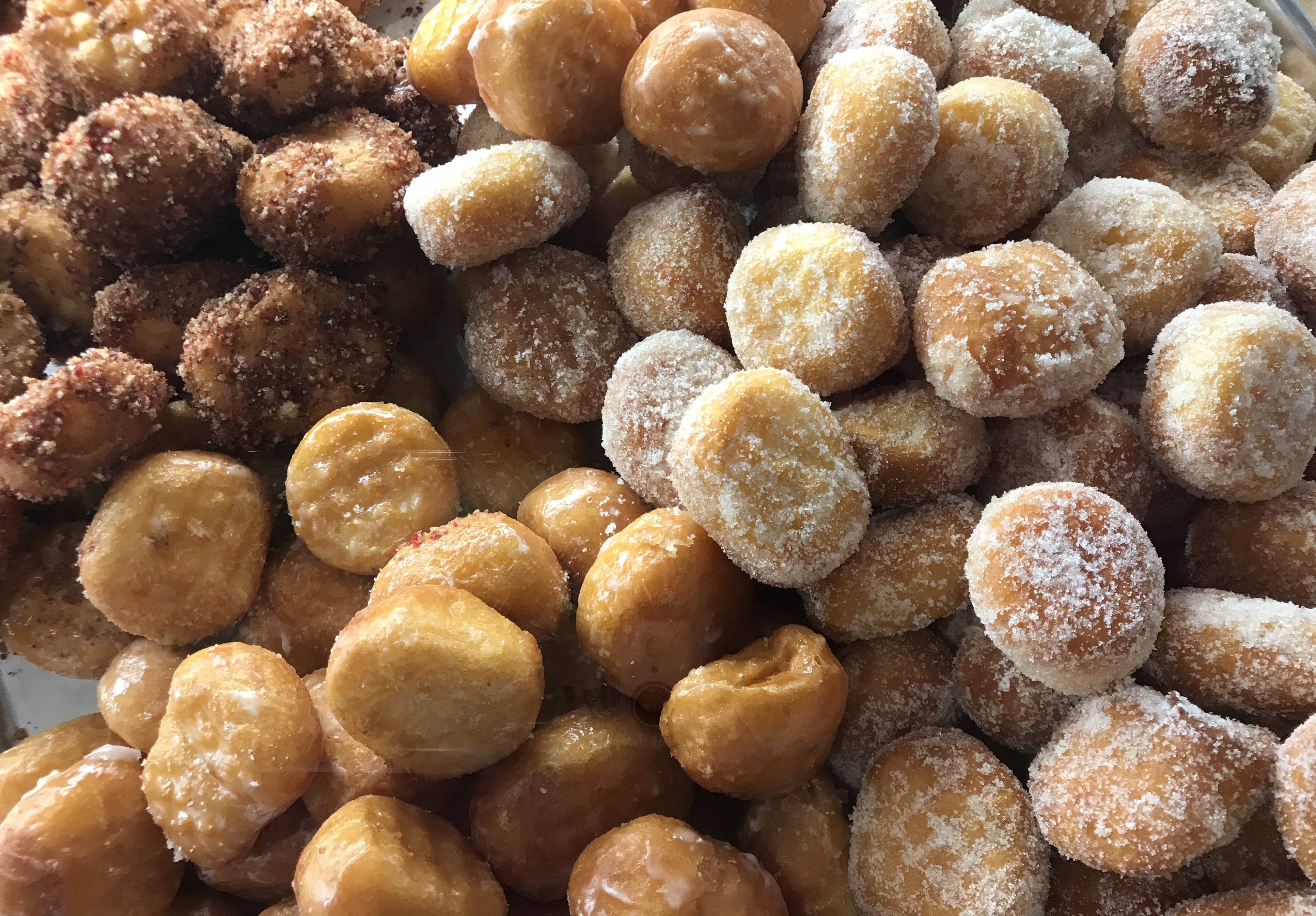 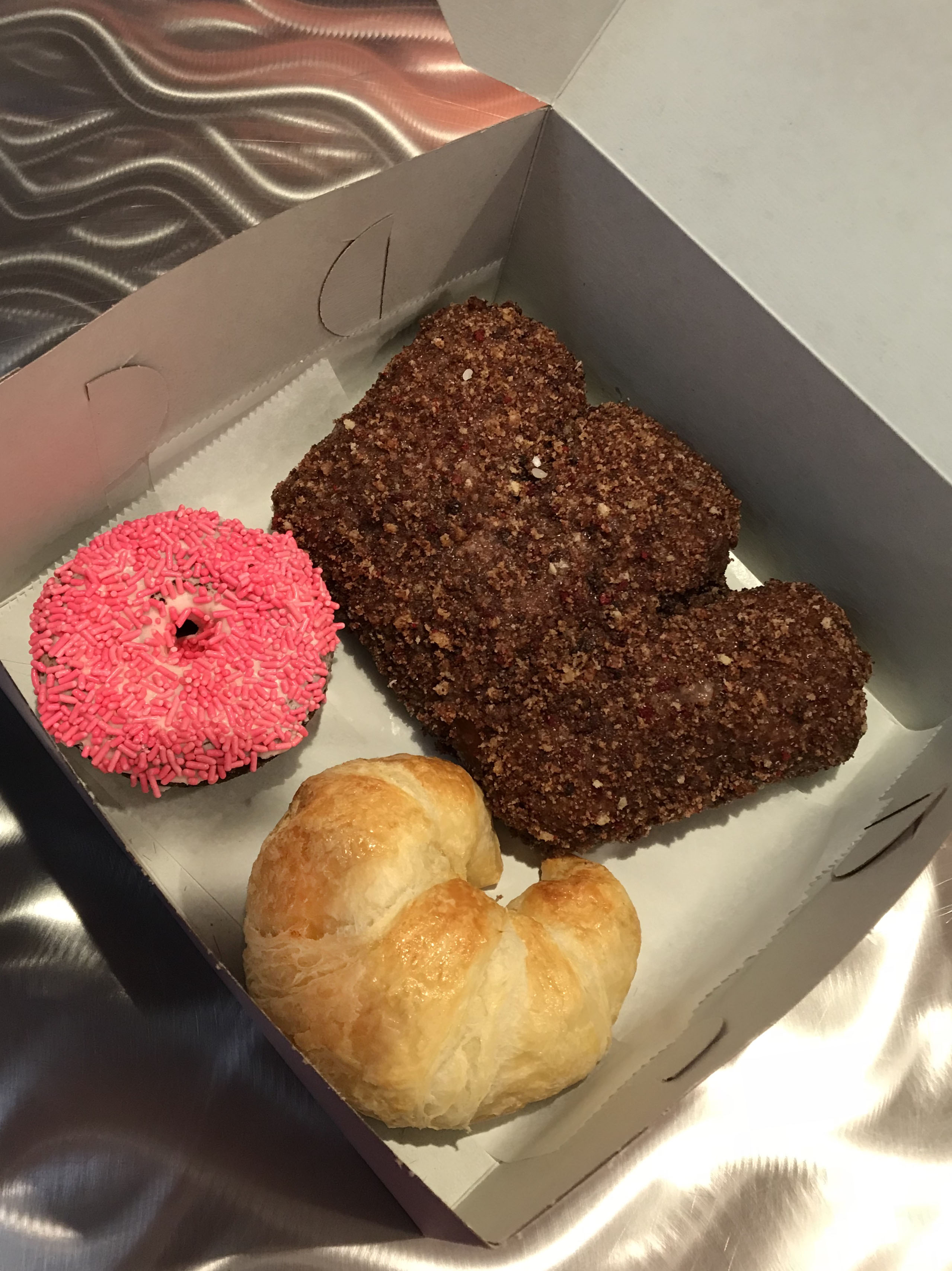 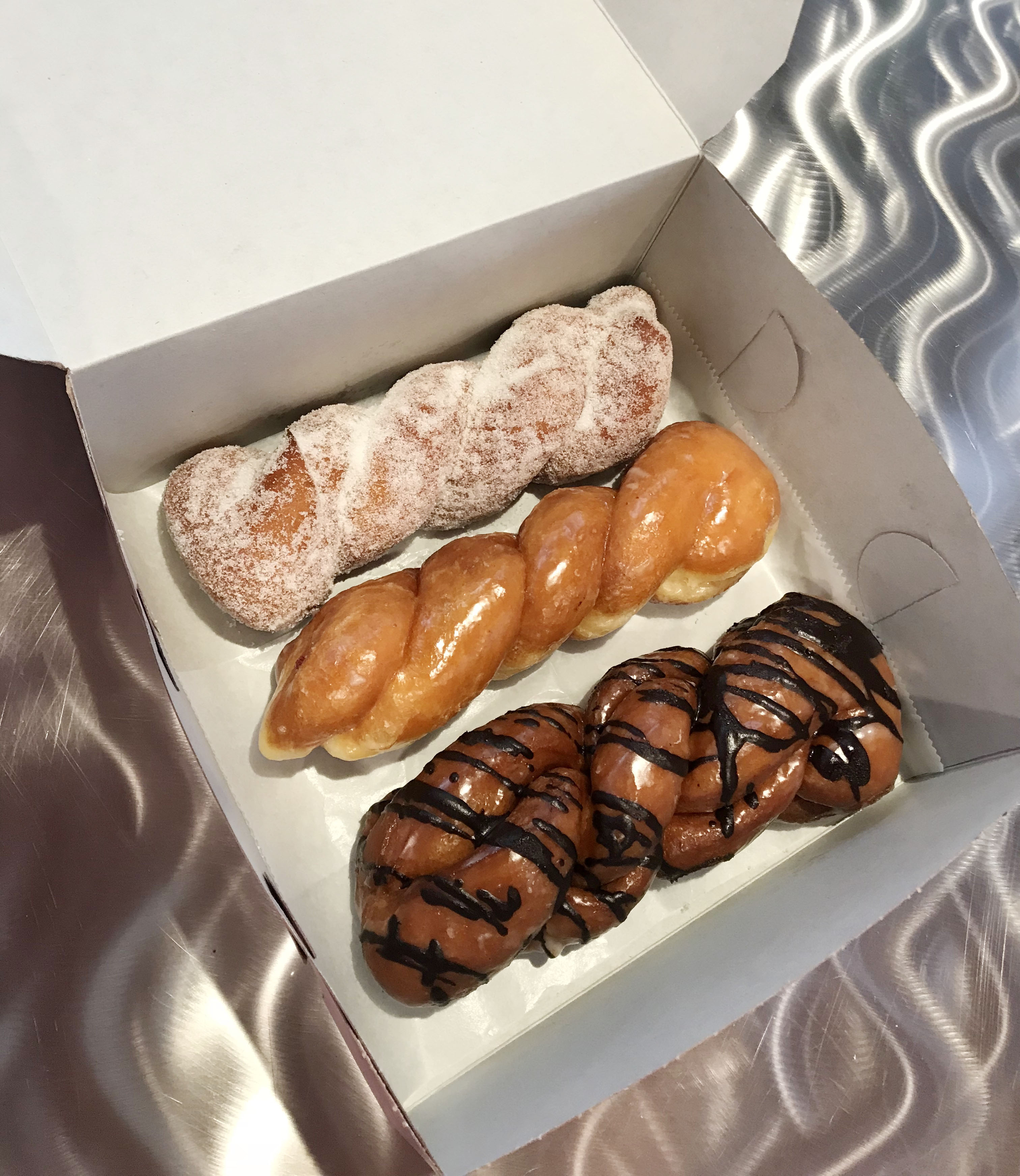 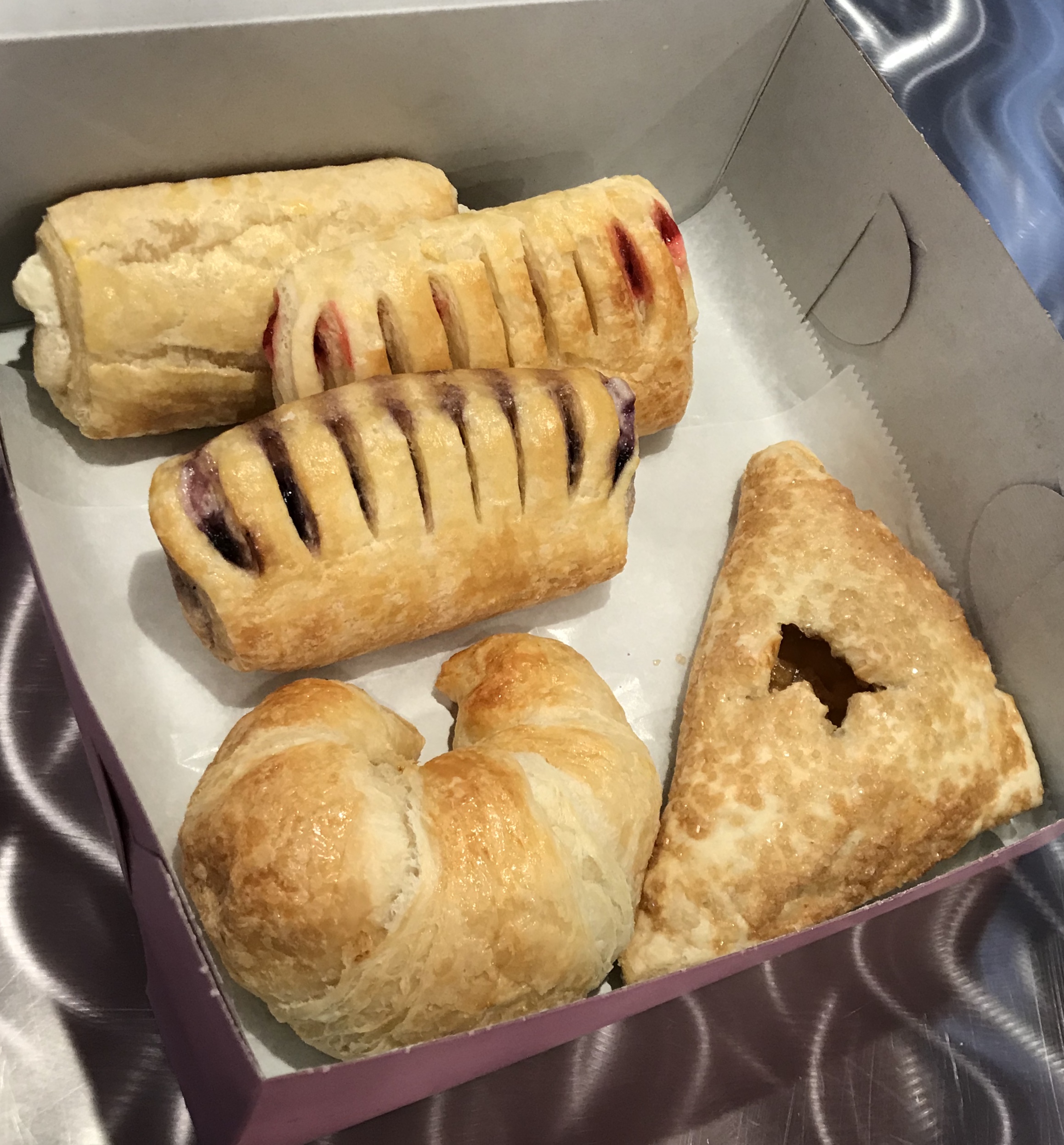 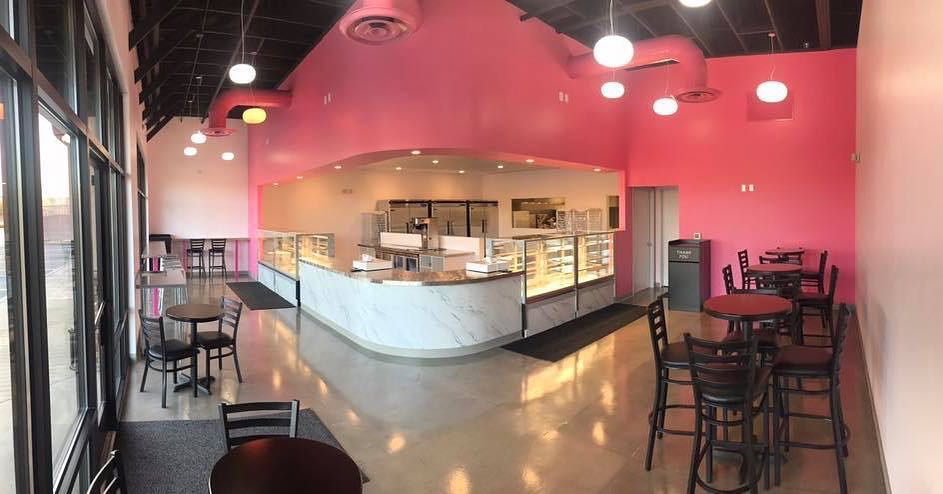 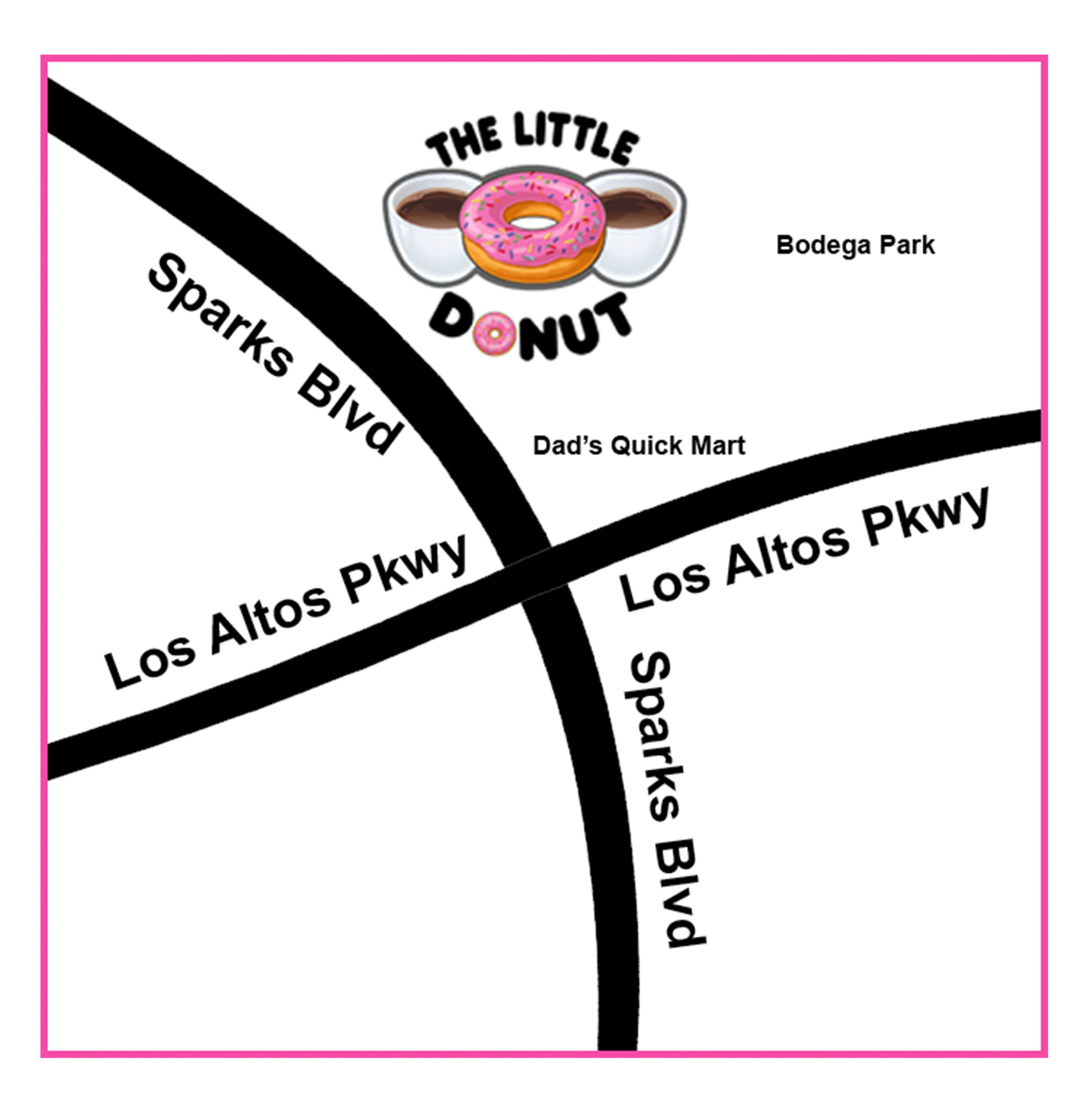 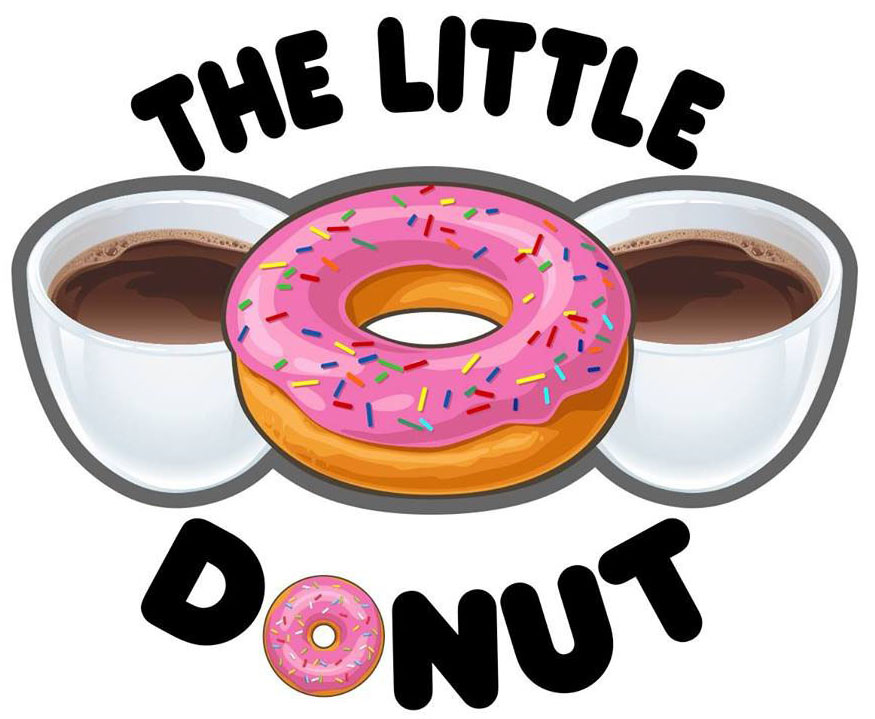 I don’t know about you guys, but it seems to me like the world is literally and figuratively on fire in many regards. Our country is ripe with animosity. People have foregone calm and open discourse in favor of unbridled rage. Throughout the chaos, one thing in my life remains constant and uplifting: doughnuts.

The kind folks at The Little Donut are doing more than serving exceptionally made doughnuts. They are picking up spirits during a time when we all truly need it. The décor inside their shop reminded me of a show on Netflix entitled “Zumbo’s Just Desserts.” The competition show features a fairytale-esque competition space where amateur dessert makers create culinary magic. The Little Donut shop is washed in crisp pink, modern styling, and a bit of magic.

A Doughnut Maker with Heart 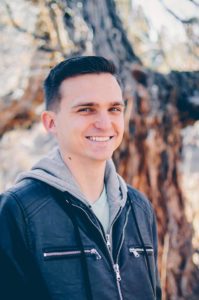 Sergey Maguire will win you over with a smile and some killer doughnuts. Image: The Little Donut

Besides the tasty doughnuts and cool décor, the shop boasts another major asset: Sergey Maguire. Maguire is 23 years old and has spent the last three months making entrepreneurship shine. The journey to doughnut greatness was not easy. Maguire’s childhood was rocked with tragedy that no person should be forced to endure. Things turned around for him when the Maguires, his adopted family, took him in and showed him love.

Later during Maguire’s budding adolescence, he discovered his calling at a family friend’s doughnut shop, Peterson’s Donut Corner. As soon as Maguire was able, he began learning what goes into San Diego’s tastiest doughnut. Ralph Peterson of Peterson’s Donut Corner served as Maguire’s baking mentor. Before too long, Maguire found that his youth had passed, and he was ready to begin a new chapter in his life.

Maguire followed his high school sweetheart to northern Nevada. Here, Maguire partnered with Sam and Julia Shields to create The Little Donut. The name of the shop is one of those cute ironic names like a sumo wrestler named Tiny. The Texas-sized doughnuts cannot be eclipsed by anything other than their gargantuan flavor.

Doughnuts to Make You Go Nuts

I opted for a fancy dozen at $17.95. The price may seem a little outwardly steep, but what’s more important to me is the value. I can candidly say that two doughnuts from this shop are a robust meal, so a dozen is sure to feed six people or one eager food reviewer six times. 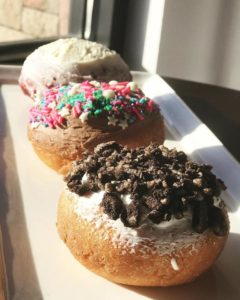 Go ahead and try to eat just one. Image: The Little Donut

Fancy doughnuts at The Little Donut refer to the doughnuts outside the standard round varieties. Examples of the standard rounds include maple, glazed, and chocolate. Some fancy varieties include twists and jellies. Also offered are specialty doughnuts like cinnamon rolls, bear claws, maple bacon, and fritters. The regular dozen is available for $10.95, and a regular half dozen is $5.95. The employees will notify you if you have selected a doughnut outside the “regular” variety.

My fancy dozen included two raised crumb, two lemon-filled powdered sugar, two lemon-filled glazed, two red velvet cake topped with cream cheese frosting (the doughnut of the day), one maple bar, one maple round, and two chocolate Bavarian cream. Yes, I know I could have gotten 12 different doughnuts for review purposes, but that would have meant I had to eat 12 different doughnuts. I’m trying to survive until my wedding in October.

Two things became immediately apparent when biting into the doughnuts. For starters, every doughnut has a crisp exterior and a moist interior. I had never eaten a doughnut with this distinct textural profile. The second especially noteworthy detail is the artisanal fillings and frostings. Maguire makes everything in-house, including the fillings, frostings, batters, and dough. He uses natural ingredients like fruit. The lemon in particular was notably sharp in flavor, a major bonus for me. Everything inside and outside the doughnuts tasted distinctly artisanal.

I normally count myself as a diehard “bread doughnut” lover, so it felt risky choosing the red velvet cake doughnut topped with cream cheese frosting. I was so pleasantly surprised that I’m now rethinking every detail of my existence. The crisp outside and wonderfully moist interior were the perfect vehicles for the partly rich and partly tart frosting.

The raised crumb doughnut was a well-executed classic that gained extra aesthetic points with the red velvet crumbs included in the topping.

The maple frosting on the bar was something special. The maple flavor was distinct and beautifully brushed onto the doughnut. All great gastronomic artisans, Maquire included, do the simple things exceptionally well.

The chocolate Bavarian cream was another classic executed to perfection. The custard inside was smooth, decadent, and satisfying.

Take note that the serving counter at The Little Donut is L-shaped. There are two doughnut cases up front, and two doughnut cases to the right of the cash register. I missed this detail while ordering my dozen. Some of the heavy hitters, like the cinnamon rolls and apple fritters are in the cases to the side. Give the shop a thorough sweep before ordering your batch.

I shared my doughnuts with some coworkers and a homeless person. I missed out on the raspberry filled, but I didn’t mind one bit. The unsolicited gift of a doughnut, especially one from The Little Donut, is a kindness that benefits both giver and receiver.