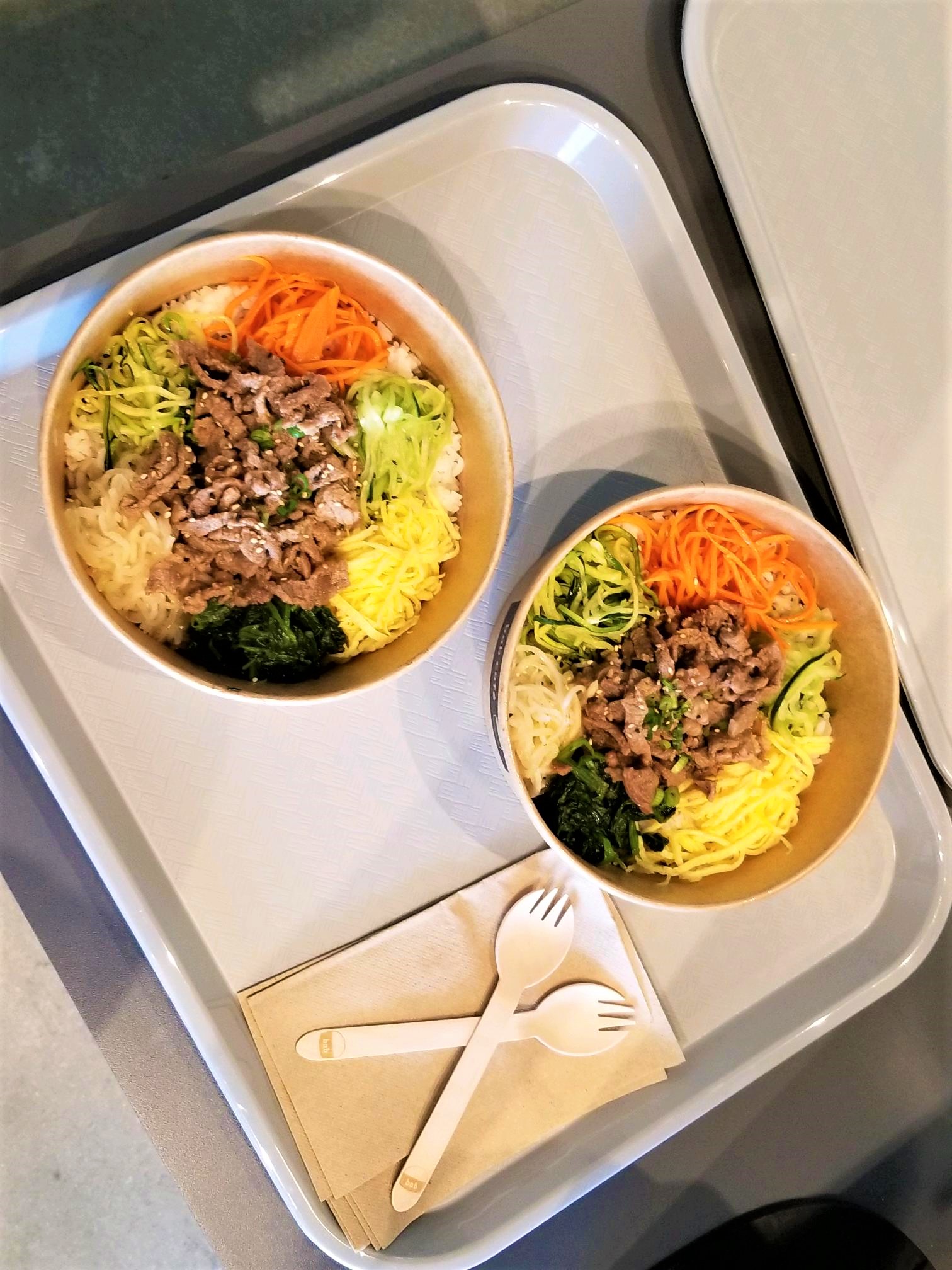 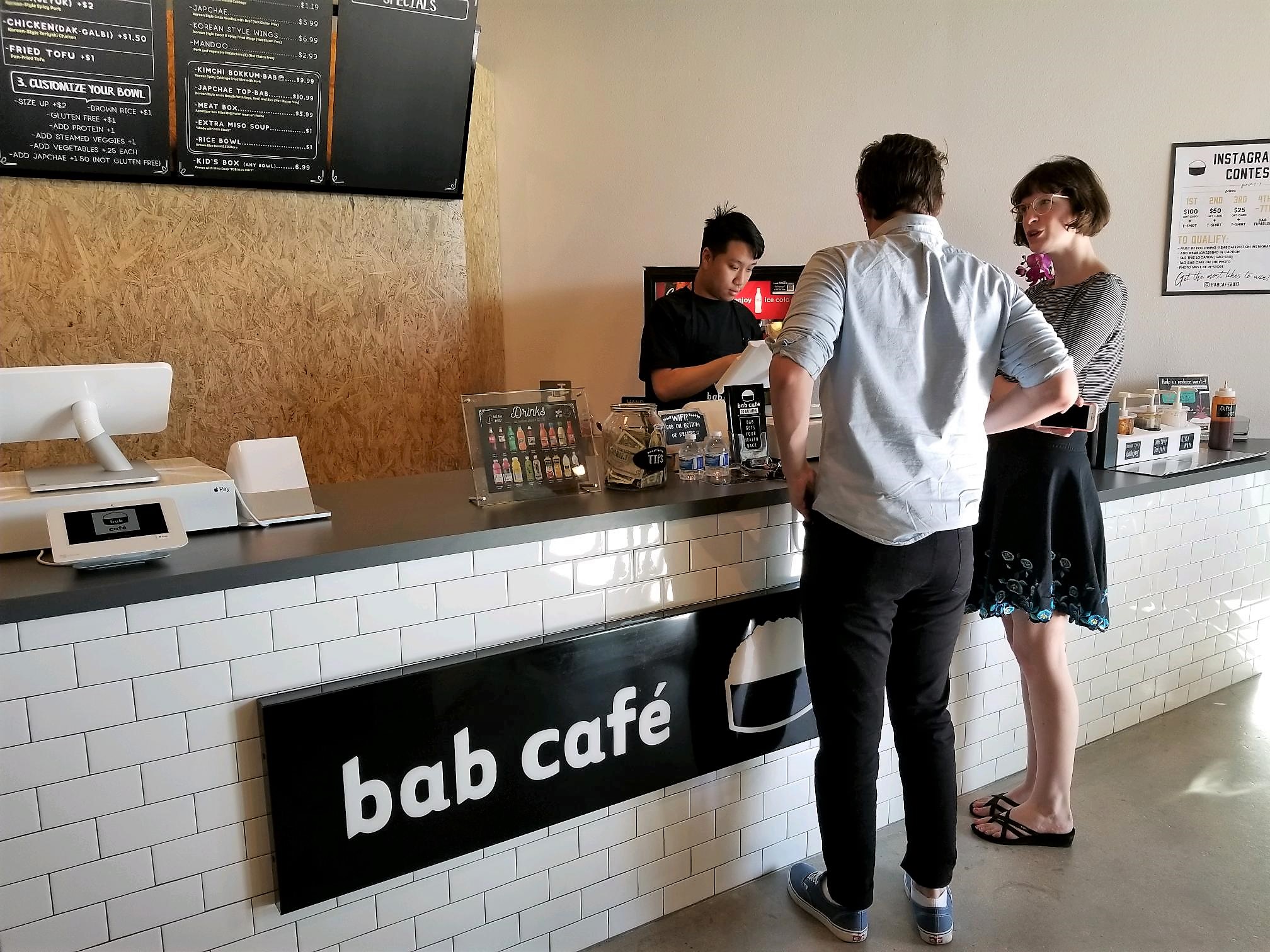 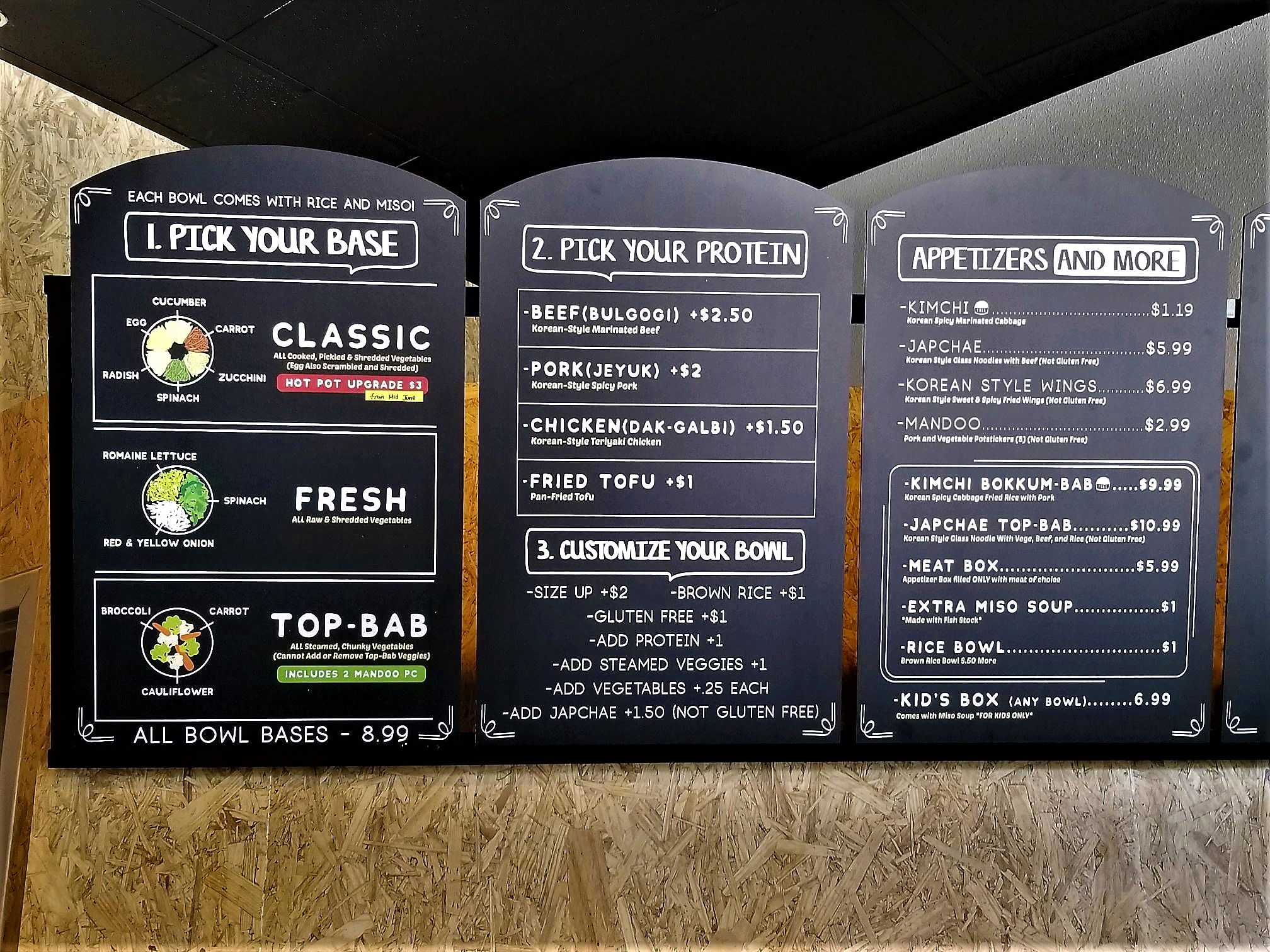 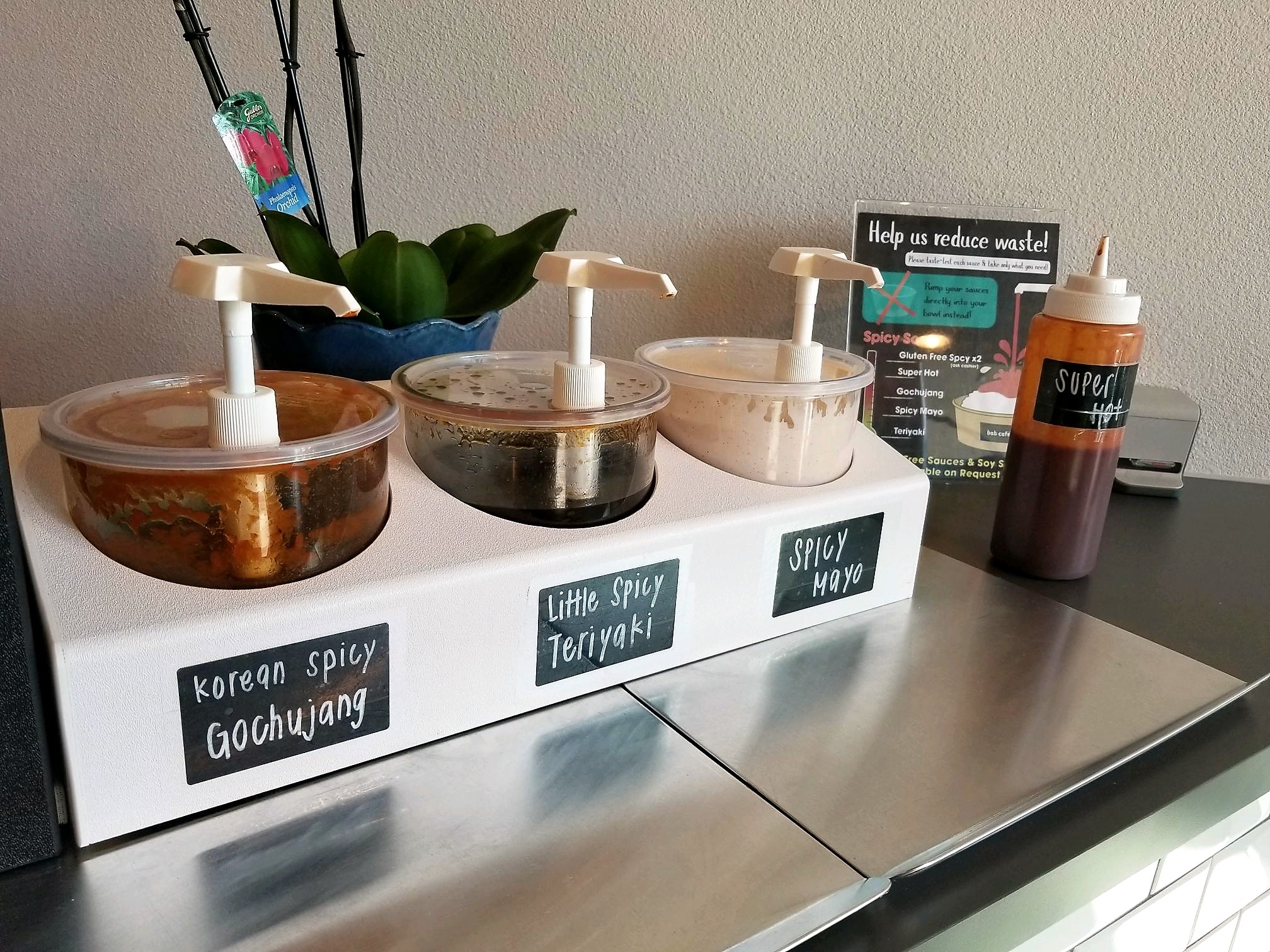 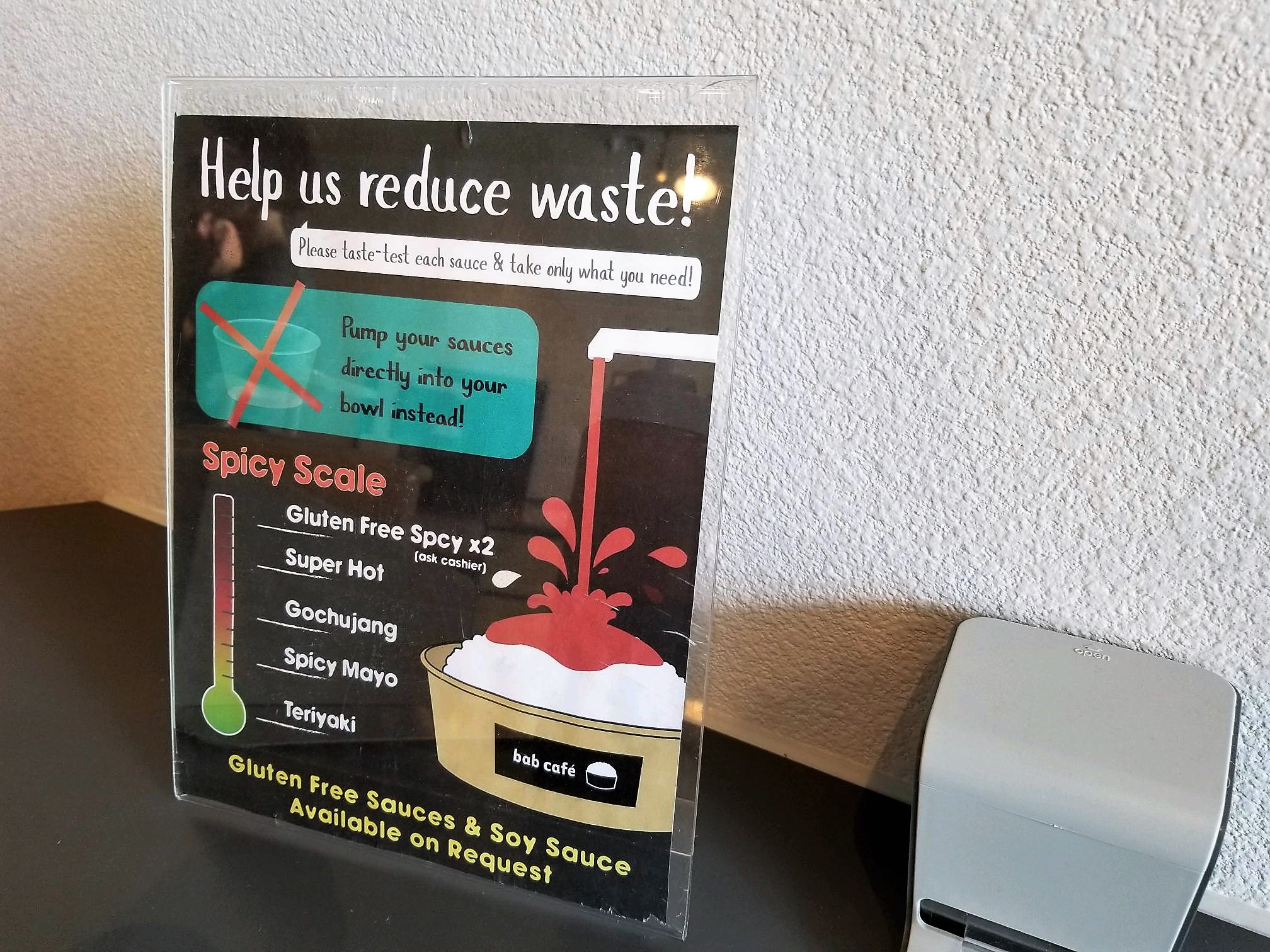 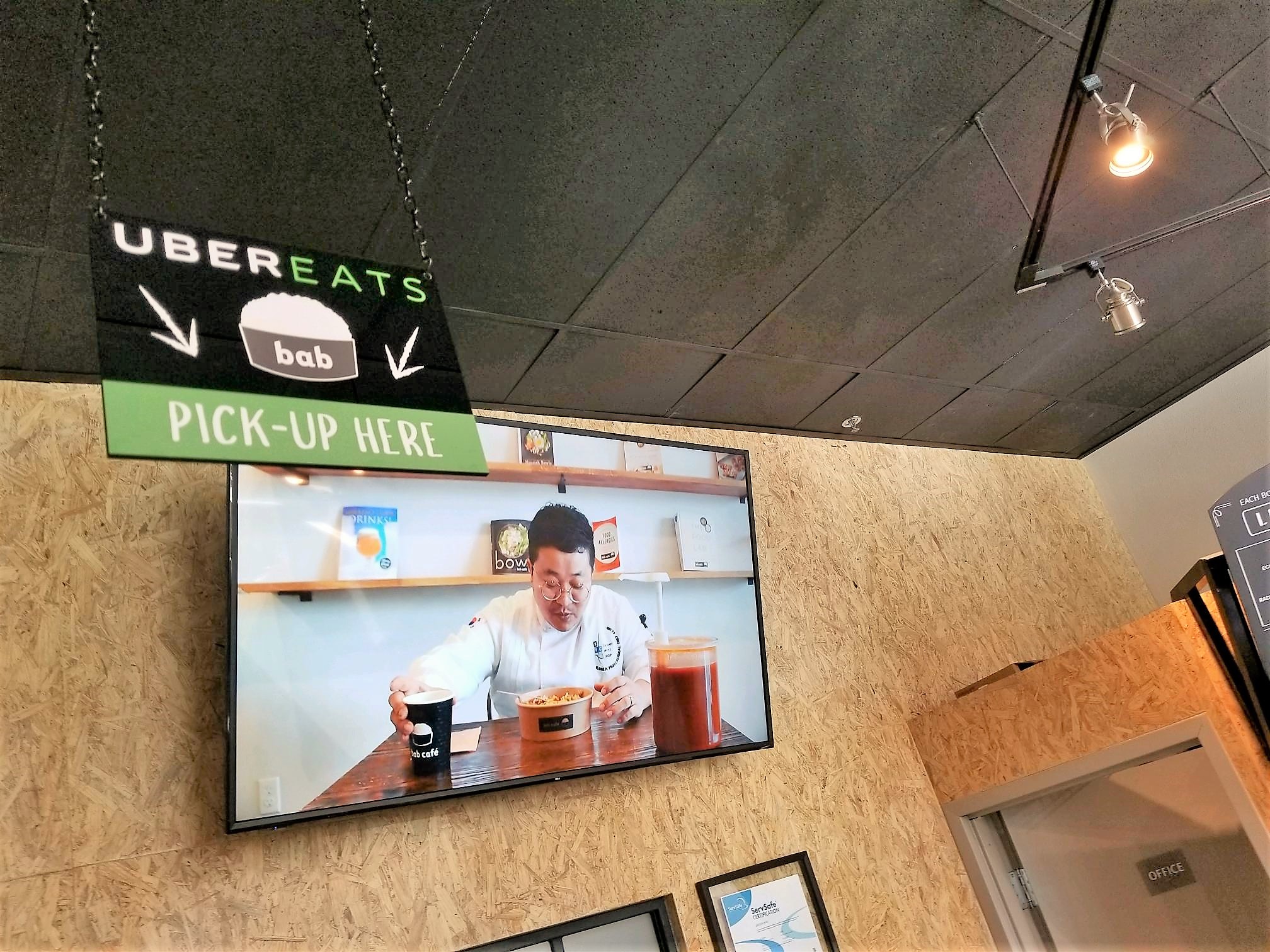 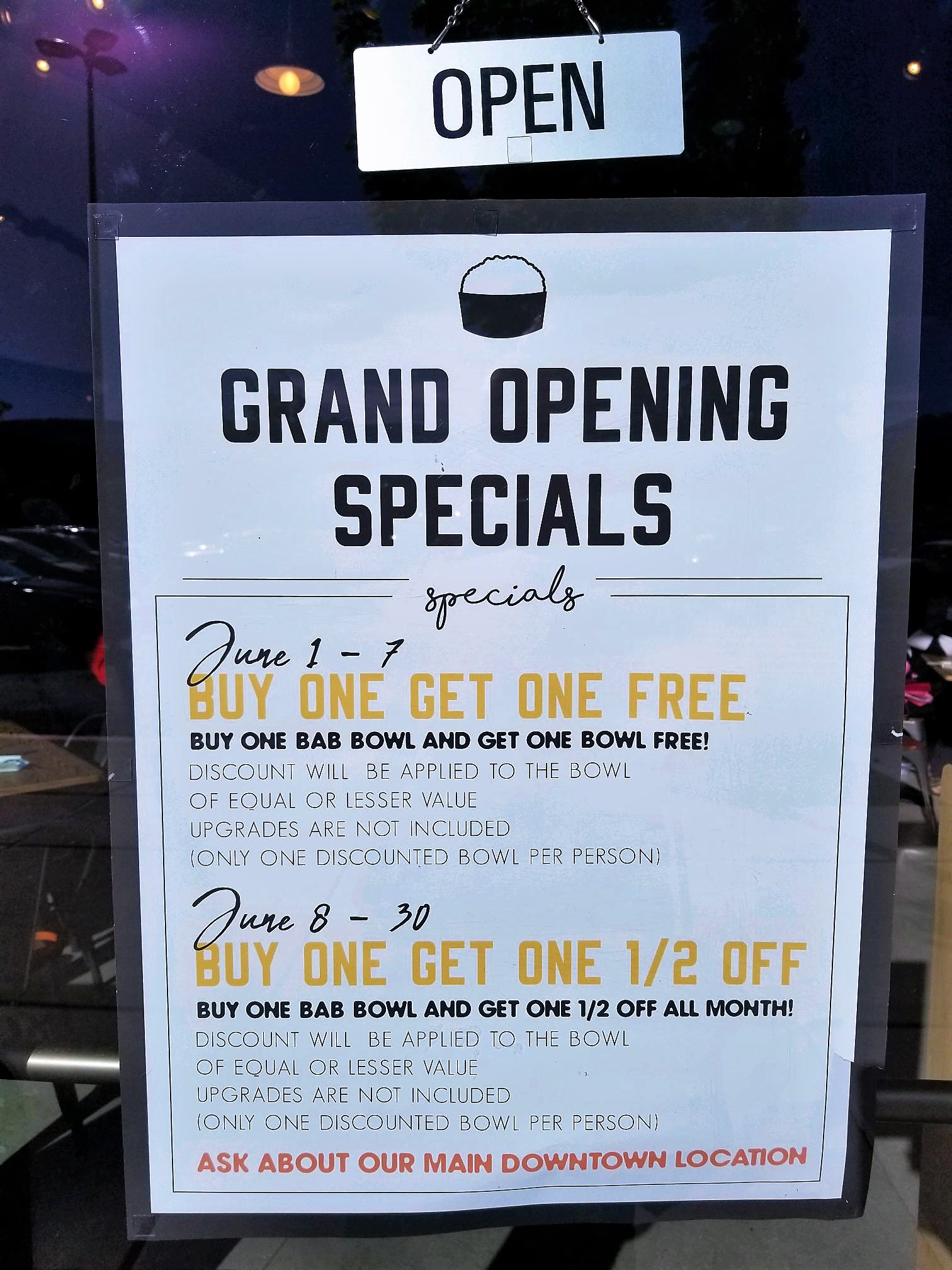 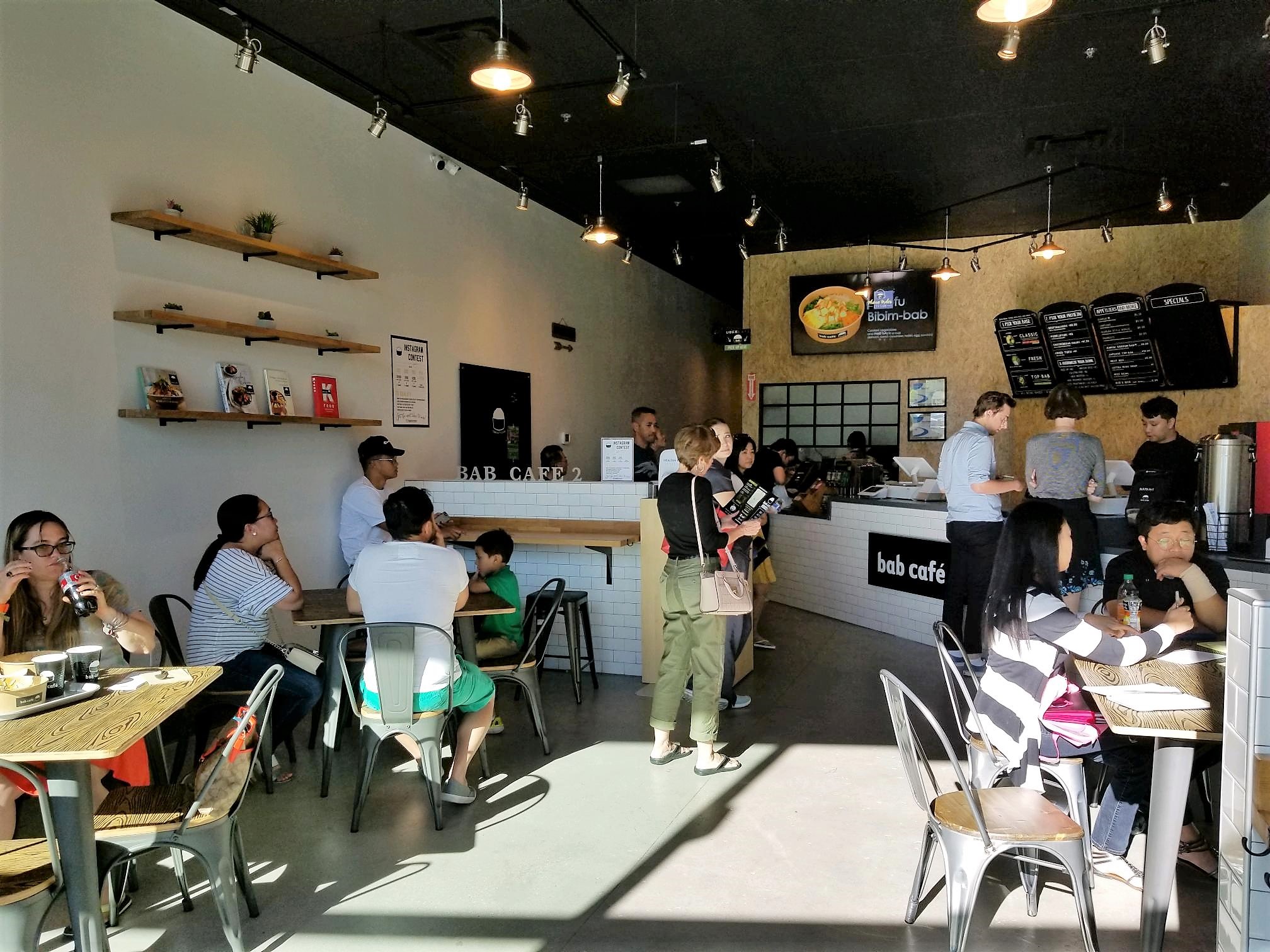 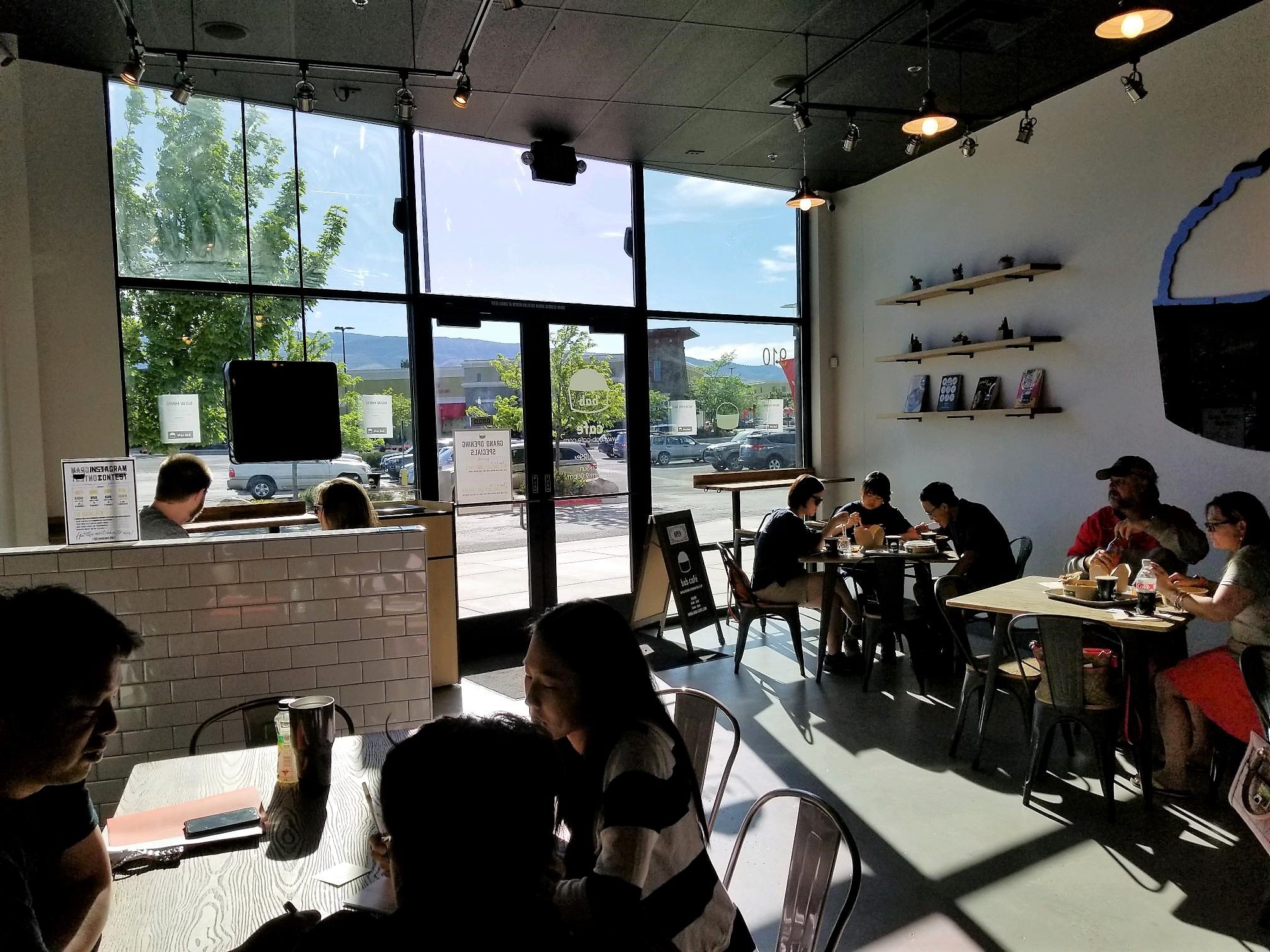 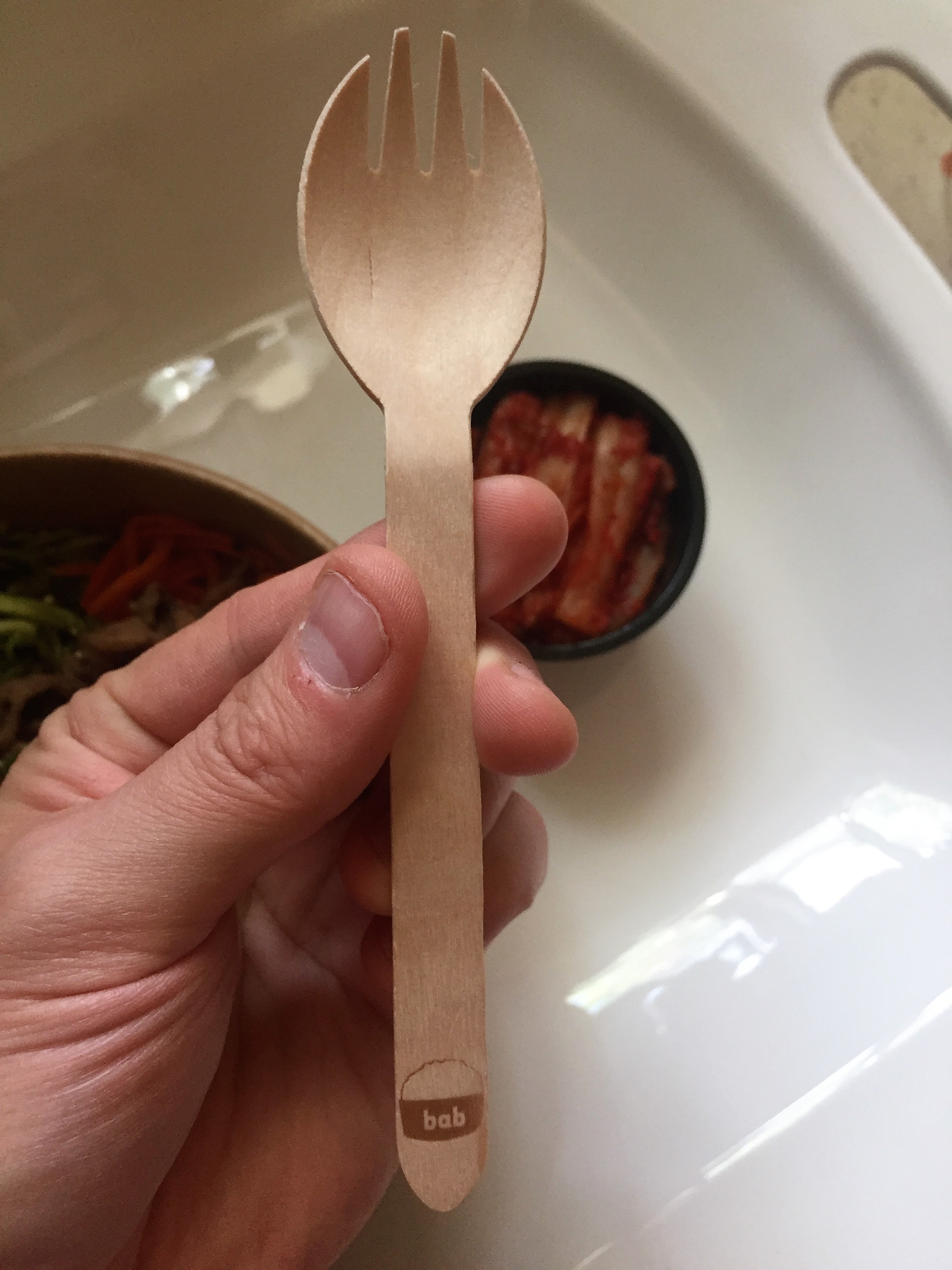 The Summit mall in south Reno added to its culinary choices June 1 with bab café, a fast-casual Korean eatery. The south-side restaurant is the second bab café to open in Reno, with the first located at West Third Street downtown.

Bab, Korean for rice, is at the heart of most of the menu selections. Entrées include classic and fresh bibim-bab and top-bab. The original name of the staple dish as it exists in Korea is bibimbap, meaning mixed rice. Adding a hyphen and swapping the “p” for a “b” allows the restaurant to make the dish its own. 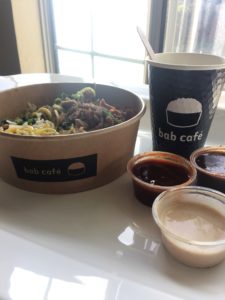 Japchae (Korean-style glass noodles), kimchi (spicy, fermented cabbage), and kimchi bokkum-bab (Korean spicy cabbage with fried rice with pork) are other favorites served at bab café. All the bowls include a side of miso soup or kimchi. Korean-style chicken wings and fried potstickers round out the appetizer menu.

My fiancé and I both ordered the bulgogi bibim-bab to-go with the classic par-cooked vegetables atop the standard white rice (regular menu price is $11.99). We happily accepted the buy-one-get-one-free entrée special available during the first seven days of the restaurant’s opening.

Because the restaurant’s original location is celebrating its one year anniversary, and due to the opening of the second restaurant, both locations are offering buy-one-get-one-half-off entrées for the remainder of June.

Alongside my fiancé’s rice bowl, she selected the kimchi as her side dish. I opted for the miso soup. We both agreed that the kimchi’s flavor and texture were on point. She thought the heat in the dish was formidable, but I found it pleasantly warm. The cabbage was crisp and juicy and tasted of chilies, garlic, ginger, and fish sauce. 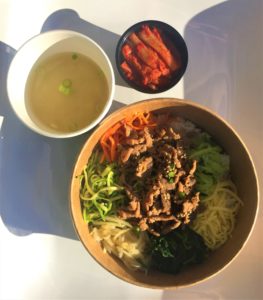 The colors are as vibrant as the flavors. Image: Kyle Young

The miso soup was tasty, but not as strongly flavored as I usually prefer. The soup did not include any soft tofu pieces or nori as are custom with the miso soups found at AYCE sushi spots. The soup did include plenty of scallions and delicate, salty broth.

Before eating our bibim-bab bowls, we heeded the advice of the instructional video that plays inside the restaurant. The video instructs diners to thoroughly mix the rice, vegetables, and sauces. The video also advises to drink the miso soup rather than spooning it.

The bulgogi, Korean-style marinated beef, was sweet but not cloyingly so. The texture had a quality that almost seemed dehydrated and then re-hydrated. That description may not be attractive from the outside, but rest assured, the meat is tender and flavorful. Exactly how the meat gains its distinct textural quality, I’m uncertain.

The multitude of vegetables, rice, and sauces create dynamically flavored and textured Korean food. I asked one of the restaurant’s cashiers, Champ, how much sauce is required for the perfect bowl. He advised that because the bowls are generous in serving size, the equivalent to three plastic ramekins of sauce should be used.

I opted for the “Korean spicy gochujang” and the “super-hot” sauces. My fiancé went for the same two I did plus the “little spicy teriyaki” and the “spicy mayo” sauces. I later found out that a gluten-free sauce is available that boasts higher heat than all the others. I appreciated the small sign next to the sauce dispensers that calls upon diners to apply the sauce directly to the food rather than using the plastic ramekins in order to reduce waste.

The original location of bab café is 303 West and 3rd Street #130 in downtown Reno. The new location is next to the movie theater at The Summit mall located at 13925 South Virginia Street #212. Call bab café at The Summit at 775-409-3520 for take-out orders. Visit both locations online at bab-cafe.com. Both locations are open seven days a week from 11 a.m. to 9 p.m.