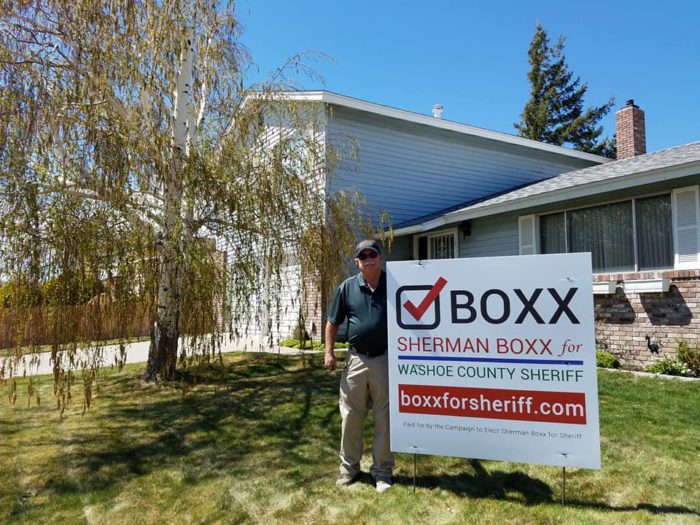 In May I spoke with Sherman Boxx, candidate for Washoe County Sheriff. Boxx is a 26-year veteran of the Sparks Police Department and was Chief Deputy of Operations at the Washoe County Sheriff’s Office. He is one of seven candidates in the race to replace outgoing Sheriff Chuck Allen. In my conversation I was rather impressed with Boxx’s experience, background, and deep knowledge of many issues facing the Sheriff’s office.

Who is Sherman Boxx? He is a lifelong policing professional who started as a Reno Police Explorer at the age of 15. His professional career with the Sparks Police began in 1977 and continued through his retirement in 2003. In 2014, Boxx heeded the call to duty again, serving as the newly-elected Sheriff Allen’s Chief of Operations until 2016. Boxx is also a devoted husband and father of two children and six grandchildren.

Boxx raised a concerning point that the Sheriff’s Office is sorely undermanned, serving at just 70 percent of the national standard ratio. The standard is 1.8 to 2.4 officers for every 1,000 population; Washoe County is at 1.1 per 1,000 citizens. Boxx has a unique solution for that in drawing and opening up positions for retired law enforcement, sworn and non-sworn, to assist with staffing.

Developing talent through recruitment across the western U.S. and reaching out to recently separated military personnel are also things Boxx would like to see as solutions to understaffing. In short, he wants to expand, refine, and develop a better front-line core and open leadership potential that is currently limited.

Another point that Boxx is focused on is to better connect and communicate the duties of the Sheriff and with the public about how the Sheriff’s Office can better assist residents. Also, continuing on the current work the Sheriff’s Office, extending community outreach to the many minority, faith-based, and cultural groups in area, along with a greater effort to reach the 12 other incorporated and unincorporated communities throughout Washoe County including Sun Valley, Incline Village, and Gerlach, to name a few.

The Detention Center was a point of focus in our conversation, in that Boxx prioritizes identifying and treating detention inmates who suffer from mental illness and substance abuse before they reach the jail.

Why vote for Boxx? He emphasized his extensive expertise in policing and that he is the candidate with the most experience of any of the seven candidates in the race. He also wishes to bring the focus back to the office’s five core duties: security for the courts, civil service, emergency response, care and custody of inmates of the detention facility, and search and rescue.

Boxx noted rather interesting in our conversation that highlights the challenges and differences of today’s environment versus when he started. When he joined in the ‘70s, the police academy was two weeks long. Today it’s a 20-week-long event focused on physical training, case laws and policy study, and mental fitness. Another distinction is that each policing agency conducts its own academy entry-level testing process. This means a candidate that wants to apply to more than one agency must test separately for each. He’d like to regionalize the testing process to conserve law enforcement resources across the county and streamline the process for applicants.

How Boxx plans to win is by talking to people throughout the community and local community boards, and by raising his public profile. He cited some challenges he faces in this race with name recognition and fundraising, but he see that as an asset as he feels that he is not beholden to any interest groups, political parties, or industry interests. He is independent and answerable only to the people of Washoe County.

In closing, a major issue that is close to Sherman Boxx’s heart is support for fellow colleagues who have fallen in the line of duty: https://www.boxxforsheriff.com/fallen-officers.html

To find more about Sherman Boxx’s campaign for Sheriff check out: https://boxxforsheriff.com/