City Sparks to Homeless on River: Move Along 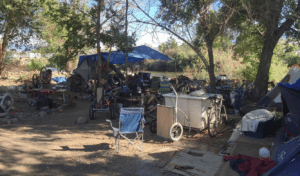 The city of Sparks is again enforcing its no camping ordinance along the Truckee River, an effort that could leave dozens struggling to find a new place to sleep.

The city is giving notice to campers along the river this week, including the offer for services and enforcement notices. Starting June 11, 2018, enforcement will begin nightly.

“Services will be offered but will not keep campers from being asked to move along,” said Sparks spokesperson Julie Duewel. “The city of Sparks is continuing to work with the Volunteers of America and other service providers to help those camping illegally along the river.

“While we always believe in service first, the city will be informing those illegally camping along the river that they will not be allowed to do so,” Duewel added. “Our Public Works Department and Sparks Police will be working together to both clean up and move them along.”

Sparks cited campers a year ago and threatened them with jail time if they did not leave. One individual, who had health problems from surviving a harsh winter, said he suffered a stroke after Sparks Police took a photo of him during that sweep.

“Police pushed us all the way out to the end of the trail almost into Storey County,” Kenneth Norton told OurTownReno. “But Storey County doesn’t want us either. We just want the struggle to stop.

Where will they go? 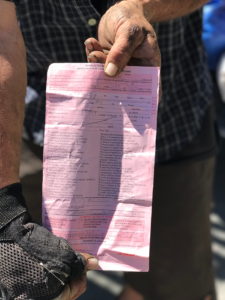 A homeless man at Glendale Park showed us a citation he received from Sparks police in 2017.

Legally, a city cannot enforce no-camping ordinances if there is no other place for the houseless to go.

A 2015 federal court filing by the Department of Justice indicated that banning sleeping in public spaces criminalizes homelessness if alternatives are not available.

Reno area shelters tend to be full, but some spaces are available now, said Pat Cashell of VOA.

“There’s no way we can take that entire population,” he explained. “But we do have beds available for some of them right now.”

The VOA shelter policy is to house individuals for up to 90 days; after that, they can’t come back for 30 days. Then the cycle repeats.

While homelessness is not a crime, municipalities can cite homeless individuals for other infractions, such as being in a park after dark, or panhandling, in order to discourage their presence.

“We’re definitely interested in looking at that,” Holly Welborn of the Nevada ACLU said to us last year. “If a person is engaging in a life-sustaining activity… they cannot be ticketed for engaging in these activities. If these individuals are being ticketed (during the day when there is nowhere else for them to go), we would definitely be interested in that.

“If the shelter is at capacity, then they should not have been cited,” she added. 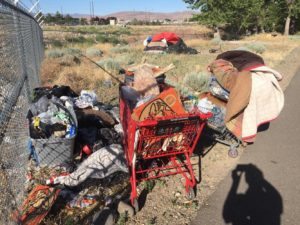 Duewel said the homeless sweeps are being prompted by numerous complaints about conditions along the river.

“Our reasons for the increased efforts are for the safety of our Sparks residents,” she said. “We have received many phone calls, emails and social media messages about the situation by the river. Those living along the river are breaking the law and Sparks ordinances.

“It is for their safety and for the safety of our Sparks residents that we will be asking them to move. We want to make the Truckee River a place where we all can feel safe and enjoy.”