Diversity Expert: Whites and Minorities Must Work Together for Equity, Social Justice 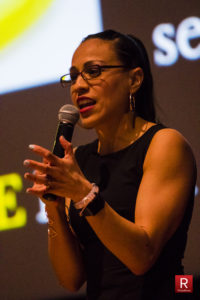 White people must work with minority groups to achieve social justice, and starting at the grassroots level with students will ensure success, a keynote speaker told an audience during Thursday’s Northern Nevada Diversity Summit at the University of Nevada, Reno (UNR).

Gina Garcia, assistant professor of administrative policy studies at the University of Pittsburgh, said students need to be engaged. She travels to colleges nationwide and often only meets with high level administrators, most whom are white.

“I rarely see students at the table,” said Garcia, whose research focused on diversity in higher education. “We have to ask students what they need.”

However, she said meeting with administrators is a start because they can implement policies and dominant groups need to help minorities do the work.

“What we’ve found in diversity research is that it’s good for the dominant group, not necessarily good for the minoritized group, especially if you’re the only one,” Garcia said. “You’re now charged with doing all the work. You’ve got to teach the white people about themselves. We can replace race with any other social identity group and that’s what happens with the minoritized group. It’s great for the dominate group because they get to learn and suck from those people and it’s really tiring for them.”

For example, she said it’s also important for men to work with women, straight people to work with gay and transgender people, and for Christians to work with minoritized religions.

Garcia noted how thinking on diversity has changed in the last 50 years. From about the 1960s or 1970s until about 1990, diversity often meant meeting one another for international food. It’s since evolved and now includes issues such as social justice.

Condemning individuals—such as people who attend white nationalist rallies—isn’t as impactful as attacking policies and procedures, she said.

Garcia also talked about many campuses, including UNR, are compositionally diverse. About 40 percent of UNR students identify as minorities. But despite data, she said the mission, purpose, and conversation should come back to equity and justice.