By Bob Conrad Published: March 19, 2018Last Updated on March 20, 2018
A strip of downtown motels demolished by Jacobs Entertainment in early 2018. 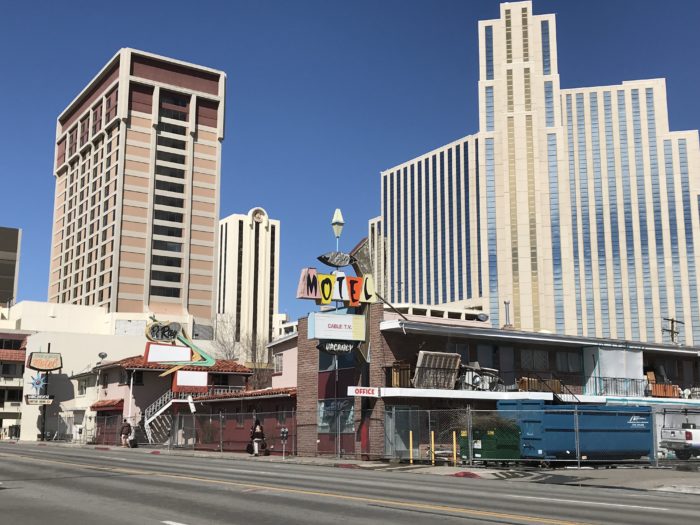 Two more motels in west downtown are slated for demolition by Jacobs Entertainment. The company is gradually demolishing weekly motels in anticipation for what is called a west-of-downtown arts and entertainment area, called the Fountain District.

But critics want to see plans for the new development, and a group has formed to try to preserve the structures. Other groups are also signing on in support of preserving the motels.

The national organization, Society for Commercial Archeology, also expressed support for saving the motels on the block between West Third and West Fourth streets and Arlington and West streets.

“The quintessential mid-century motels within this area date from 1946 to 1979 with an early Craftsman residence built in 1920,” according to Mid-century Modern Reno. “This district has the potential to encourage locals and tourists to enjoy unique experiences, including a vintage neon sign tour highlighting the rich history of the Lincoln Highway and the significance of the motels during the mid-20th century.”

Michael Hirsch, with the Society for Commercial Archeology, said he supports these uses.

“We support the Mid-Century Motel Team’s vision for the preservation of the ‘Block,'” he wrote to Jacobs Entertainment. “We feel that the unique character of Reno needs to be saved. We are excited about opportunities for adaptive re-use of historic motel properties.”

Others, however, say it’s time for the motels to go. Mayor Hillary Schieve has been touting the demolitions of other weekly motels as part of what she calls a “blight buster” initiative. A number of ThisisReno readers also disputed their need: many are in favor of demolition; many are not.

“These motels are blight,” one reader wrote. “It would cost more to rehab them … than it would to tear them down and build something more modern in their place.”

Barrie Lynn with the Mid-century Motel group last week appealed the demolition of three motels to the City of Reno, and today she said that two more were added to the list of demolitions.

The city denied Lynn’s appeal. She, in turn, appealed the city’s denial.

“I appealed the denial of my appeal on the premise that under title 18.08.201, ‘land uses not specifically listed in this section and on the summary use tables below are prohibited,’” she told ThisisReno. “Vacant land is not listed on the table and is therefore prohibited.”

UPDATE: Connie Liu with the Abbi Agency, representing Jacobs Entertainment, said that plans have not been finalized on the parcels.

“Planning for the West 4th Street corridor and Fountain District is still in process and plans regarding demos and buildings are being evaluated in that planning process,” she said. 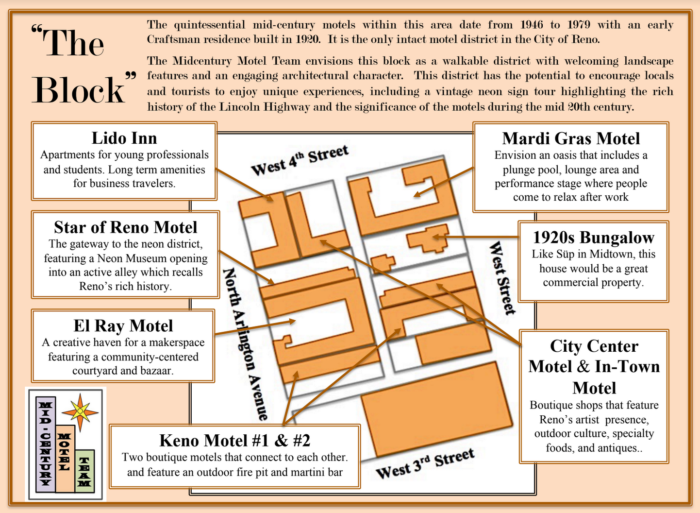 The Mid-century Motel Team has new ideas for motels scheduled to be demolished.

From The Left: This Has Been a Test (Opinion)