NOTE: This article includes profanity in the context of a quote and may not be suitable for everyone.

The Washoe County School District (WCSD) announced today that it is reversing course on a McQueen High School student’s suspension last week over a swearing incident to U.S. Representative Mark Amodei’s (R-Nev.) office. The district cited expensive litigation for the change of direction but defended the suspension.

The student, Noah Christiansen, was suspended for calling Amodei’s office during the national school walkout and saying, “Congress people who are not acting on gun control reforms need to get off their fucking asses and do something.”

For that, Amodei’s office complained to McQueen and Christiansen was suspended for two days from school. Amodei defended his office’s response.

“I don’t see facts to support the school’s action,” said Snyder. “Christiansen made the call during a student walkout, not during a school sponsored activity. There are no facts to indicate that other students even heard the allegedly offensive comment. His comment was made in the context of political speech and as such is at the heart of what the First Amendment protects.” 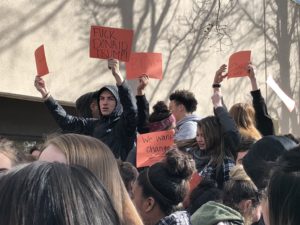 “Mindful of its fiscal responsibilities to local taxpayers and in order to ensure that WCSD resources are spent on educating students rather than on expensive and protracted litigation, WCSD has agreed to the ACLU’s request regarding modification of a McQueen High School student’s educational records,” the district said today in a statement to the news media. “WCSD is willing to compromise and will no longer recognize the discipline that was issued to the student.”

“The McQueen principal responded in accordance with the WCSD’s educational mission and its progressive discipline procedures,” according to a press statement. “District leadership feels strongly that McQueen High School administrators followed all policies and procedures in this case when disciplining the student for offensive and inappropriate on-campus conduct.

“The student’s conduct also created a disruption of the school environment as other McQueen students mimicked the student’s behavior and shouted profanity at McQueen teaching staff.”

WCSD refused to answer questions by ThisisReno as to whether another student, photographed by reporter Carla O’Day protesting with a sign that read “Fuck Donald Trump,” would also be disciplined. Despite emails as to WCSD’s consistency in enforcing student conduct, district spokesperson Victoria Campbell would not answer two questions:

Campbell instead sent us a link to the district’s 45-page student behavior document and a link to a page of its policies. Neither link indicated whether the district would enforce its rules similar to Christiansen’s case. 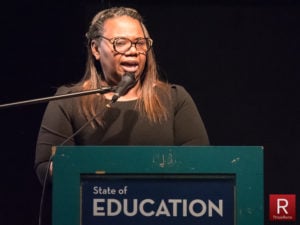 “The Washoe County School District respects the First Amendment rights of students and encourages students to exercise those First Amendment rights and to engage in the political process,” said Superintendent Traci Davis.  “However, as educators we also serve a critical educational purpose to prepare our students for citizenship in our democratic system, which includes educating our youth on manners of civility, proper decorum when expressing opinions, and to treat all persons with respect. I support our teachers and administrators who work tirelessly to instill these essential values in our students.”

Davis said that the district is “mindful of its fiscal responsibilities to local taxpayers and in order to ensure that its resources are spent on educating students rather than on expensive and protracted litigation, the district has agreed to the ACLU’s request and is offering a compromise and will no longer recognize the discipline that was issued to the student.”

“While the WCSD believes that the school acted appropriately and that this should have been a valuable teaching moment and learning opportunity about appropriate manners of civility in the democratic process, the WCSD does not believe that the costs of protracted litigation outweigh the benefits,” Rombardo said. “This important role for our educators has been reinforced by our nation’s highest court when analyzing the parameters of student speech in holding that nothing in the Constitution prohibits school districts from insisting that certain modes of expression are inappropriate and subject to sanctions. The Supreme Court has consistently held that the inculcation of the foregoing values is truly the work of the schools.”

The ACLU said it was happy with the response from the district. ACLU of Nevada Legal Director, Amy Rose, and Christiansen, said the precedent has been set for future free-speech issues.

“This is a major win for the first amendment,” Rose indicated. “Noah will move forward with a clean disciplinary record. Students, like everyone else, have a right to criticize government officials. Now students will know they have a right to speak passionately about their political beliefs, free from retaliation.”

Christiansen, who admitted he could have used a better choice of words, agreed: “I am so happy with this outcome. This has been a very stressful week, but I am glad I stood up for my rights and I hope other students will do the same.”

UPDATE (3/24/18): The response from the ACLU and Christiansen was added today.