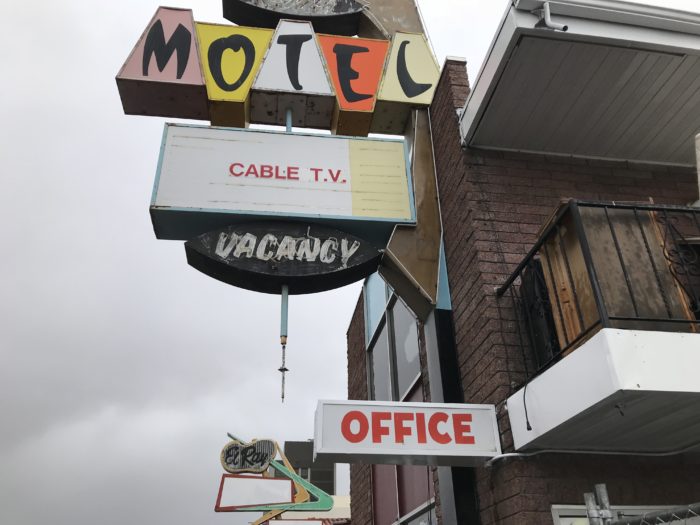 The Keno Motel’s sign is going to be preserved as part of the Fountain District development, according to Jacobs Entertainment. Image: Bob Conrad.

Demolitions of west downtown motels, some of which are being appealed, started today. The El Rey was being torn down around 1 p.m. while an adjacent motel was being cleared of debris.

Representatives for Jacobs Entertainment, which purchased the properties for its Fountain District, said plans for the properties are not yet determined. Meanwhile, the parcels are becoming vacant lots as motels get demolished.

“Planning for the West Fourth Street corridor and Fountain District is still in process, and plans regarding demos and buildings are being evaluated in that planning process,” said a company representative.

The company indicated that some of the motels’ historic signs would be preserved.

“More than half a dozen neon signs from Reno’s historic West Fourth Street corridor will be protected and preserved by Jacobs Entertainment Inc.,” the representative added. “One of the most powerful connections to Reno’s past can be found in the neon signs which have attracted clientele to properties throughout the city for the last 100 years.

“Many of the buildings that Jacobs is currently renovating and is planning to renovate contain these iconic throwbacks. These buildings include Carriage Inn, Donner Inn Motel, Stardust Lodge, and Keno Motel. The preservation of every neon sign, regardless of its condition or size, is an integral element to these projects,” she explained.

Meanwhile, appeals on the demolitions were denied by the City of Reno. Numerous preservation groups are advocating for the preservation of the structures.

“Too often developers and owners think that historic preservation need be an either/or decision,” said Heidi Swank of the Nevada Preservation Foundation. “We know that we can do both in one project: adaptively reuse the existing building and build new construction alongside it. Many cities that we in Nevada look to as beautiful cities work hard to retain their older buildings alongside new construction.”

Five motels on the block between West and Arlington at Third Street are slated for demolition.