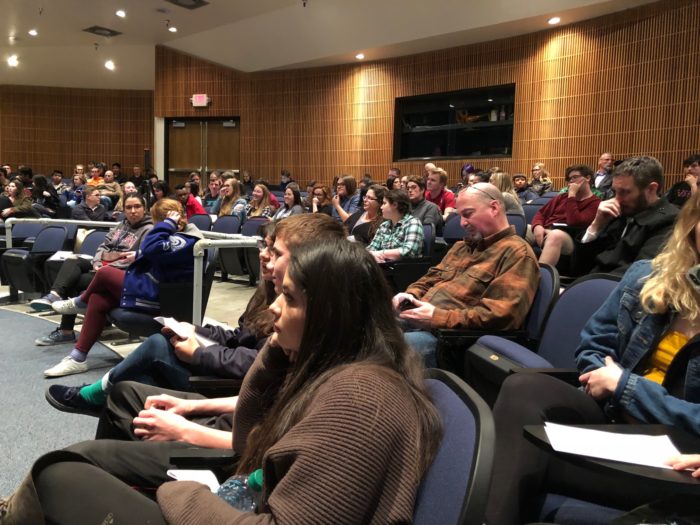 A forum with local leaders Tuesday that addressed guns and student safety attracted a panel of local leaders to McQueen High School, along with an auditorium full of students and their parents.

The student newspaper, the McQueen Excalibur, put on the forum, “Making Sense of Gun Violence.” Questions were submitted in advance by McQueen students.

McQueen English and journalism teacher Ryan Smith said students are beginning to realize there are no easy answers to solving violence. However, he said students want to be included in decisions that affect their lives and the forum was a way to give them a starting point. 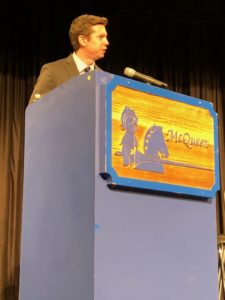 Smith said two questions were on the minds of students after last week’s National School Walkout to protest gun violence: “‘So what?’ and ‘Now what?’”

“As the nation debates the course ahead, it’s easy to let our emotions get the best of us,” Smith said. “It’s easy to forget we all share a common goal to make sure events like the shootings in Parkland (Florida) and the one in Maryland (Tuesday) never happen again—even if we don’t see eye to eye about how to make that happen.”

One of several topics was whether more police officers should be in schools.

Panelist and Reno Police Chief Jason Soto said he sees more police officers in schools as a good thing, although it couldn’t happen overnight because of extensive training involved. There’s a 2-year turnaround from when someone puts in their application to when they hit the street, he said.

State Sen. Julia Ratti, D-Sparks, said more police at schools would be nice, but funding would be a challenge when considering all the resources schools need.

“When you look at the broad range of things that affect student lives and where we can make a difference, I’m not sure—for me—that more school police rises to the top of the list out of all the things we need to invest in,” Ratti said. “But if the alternative is having more police officers versus asking teachers to become armed, then absolutely the solution needs to be more police officers.”

Alyson Kendrick, president of the Washoe School Principals Association, said safety drills have been done at schools and they sometimes result in younger students crying or becoming afraid.

Forum panelist Sharon Oren, owner of Maccabee Arms in Reno, said putting police substations in some schools and in other spots around the community would deter violence and increase response times.

“As long as there are gun-free zones, the people who don’t care about the laws will go in there and do what they want,” said Oren, a veteran of the Israeli Defense Forces.

Whether mental health is the culprit of gun violence was another hot topic. Although public funding for mental health services needs improvement, several panelists said they don’t think the two generally go hand-in-hand.

“Every other thing is at fault but gun violence,” said Lesley Pittman, Nevada director of Everytown for Gun Safety.

Oren pointed out that all people have mental health issues and said the panel contained no psychologist. He then backpedalled and noted Assembly Majority Leader Teresa Benitez-Thompson is a social worker. 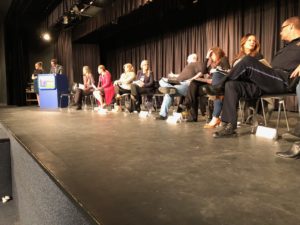 Benitez-Thompson, D-Reno, acknowledged there aren’t enough resources going to help those struggling with mental illness. Children’s Cabinet is currently using a federal grant to help teens and young adults at their first psychotic break, although she said grant money eventually runs out and funds from elsewhere would need to be identified if the program were to continue.

Schoolteachers are asked to be responsible for so much and there’s not a clear path or approach on how to address a child suspected of having problems, Benitez-Thompson said.

“Teachers shouldn’t be expected to be everything to everyone,” Benitez-Thompson said. “We’re asking teachers to be responsible for so much more than just academics. If you see a child with a problem…that they were somehow supposed to fix that.”

Registering to vote, being involved and knowing fact from fiction were also mentioned.

“It’s easy to get wrapped up in social media but we need to have dialog,” Soto said.

Reno Mayor Hillary Schieve encouraged students to continue being active and to watch what they write on social media, or to “post with a purpose.”

“You guys are moving the needle, not the elected officials,” Schieve told the students.

Others were also encouraged by the student turnout, including Oren. He encouraged the high schoolers to know their topics and do their research.

“One day when I retire, I want my daughter to be like you,” Oren told the students.

Call on Congress to end gun violence as part of...