By Carla O'Day March 28, 2018
“Reno at the Crossroads" will be on display in the UNR Mathewson-IGT Knowledge Center through December. The exhibit marks the city’s 150th birthday. The Reno Arch is at the entrance of the building. Image: Carla O'Day 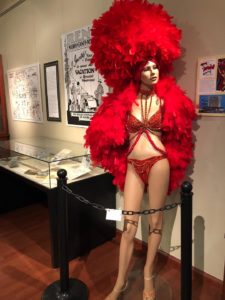 “Reno at the Crossroads” will be on display in the UNR Mathewson-IGT Knowledge Center through December. The exhibit marks the city’s 150th birthday. Image: Carla O’Day

To mark this occasion, all five floors of the Mathewson-IGT Knowledge Center at the University of Nevada, Reno (UNR) are adorned with stories, photos, maps, documents and other topics addressing the city’s history.

The exhibit, “Reno at the Crossroads,” is scheduled to be up through December.

Reno was founded May 9, 1868, the same year the transcontinental railroad reached town. Prior to that, the Truckee River became a popular point for travelers on their way to the California gold rush. The river crossing then became increasingly important with the discovery of the Comstock Lode in 1859 as mining and agriculture gained notoriety.

Stories surrounding Reno’s tourism, it’s relationship to the environment, its history as a divorce destination, and its status as a transportation center are among those told. Culture in Reno, the city’s economy, and visions of Reno’s future are also included.

Those touring the five-story UNR library can obtain knowledge on things about Reno only few people know. 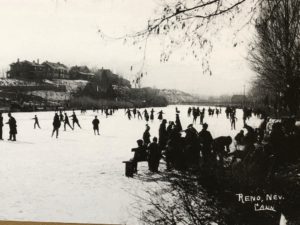 People ice skating on the Truckee River in about 1919. The image, which is part of the “Reno at the Crossroads” exhibit, is from the Nevada Historical Society.

For example, one photo on loan from the Nevada Historical Society shows people ice skating on the Truckee River. The caption included with the black and white shot, circa 1919, said the water back then sometimes froze solid enough to allow people to skate safely.

Additionally, Reno took on its “Biggest Little City in the World” nickname in 1929 for its unique combination of sophisticated urban appeal and small-town charm, exhibit literature states.

Local historian Alicia Barber developed the vision for the exhibit and a grant from IGT made it possible. Peggy McDonald designed the display. Library staff also had a hand in bringing the exhibition to fruition.