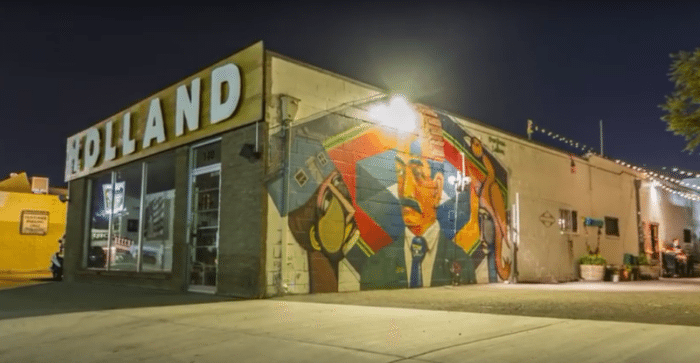 That’s how Alisha Funkhouser, the Holland Project’s gallery director, kicked off the free “All In” reception at precisely 6 p.m. on Friday, March 16 at the organization’s space on 140 Vesta St. in Reno.

Funkhouser was referring to the tags placed on the 41 installations in the gallery intended for sale after a four-day exhibition period. Installations ranged from ceramic creations to acrylic paintings, embroidery, and even a refinished chair and wooden stereograph depicting an ever-changing landscape. 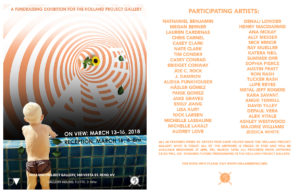 Other highlights included David Tilley’s “Where the Sand Stretches on for What Seems Like Forever”, which features a map of the Black Rock Desert with the words “I Promise to Forget You” cut out of a postcard, and a poem by Ally Messer depicting a student transforming into a Venus flytrap after eating its seed. Even a photograph of a person walking under an overpass at night fit in against the myriad of pieces surrounding it.

Staged as a fundraiser for the Holland Project, “All In” is intended as a showcase for artists who have contributed to the development of the organization through previous financial or artistic contributions. All but one of the custom-created works, which were sold for $100 each, were created within the last three months. Six of them sold within five minutes, and 20 had sold within an hour.

In addition to viewing the artwork, the dozens of people that gathered indulged on free cupcakes, marshmallows, and coffee to ward off chills from the snowy day. In addition, the Nom food truck sold burritos for $10 just outside the building.

Proceeds from the event will go toward funding for future events at the gallery. For more information on The Holland Project and upcoming events, visit http://www.hollandreno.org.