Report: TMWA Can Feasibly Operate Through a Drought

By Carla O'Day February 21, 2018
The Truckee River during a drought year. 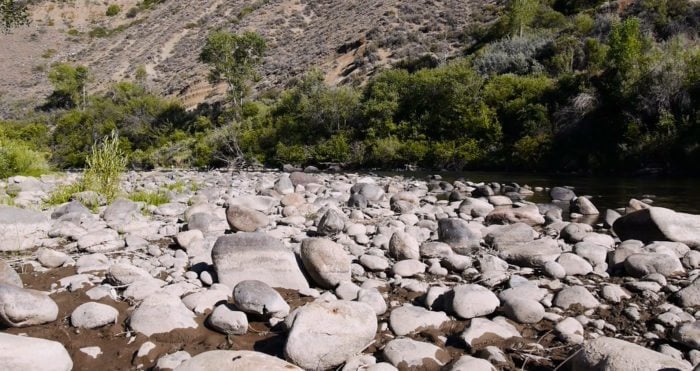 The Truckee River during a drought year.

A drought contingency project that contains information about how climate change may impact regional water supplies, among other things, was heard Wednesday by the Truckee Meadows Water Authority (TMWA) board.

TMWA recently completed a two-year response plan with help from a Bureau of Reclamation grant. The bureau manages water and power in the western United States.

“It’s a stress test of TMWA’s system based on a hydraulically-plausible scenario that could occur as a result of climate change,” Christman said.

The project was a technical assessment of TMWA’s resiliency to simulated extreme droughts that could be related to global warming. The study evaluates the drought scenario within a decision support system model that balances monthly water supplies against customer demands.

“The results suggest that regardless of customers’ ability to reduce water usage, available water supplies would be sufficient to meet demands over the 15-year simulated drought,” a report summary said. “The model indicates TMWA can feasibly operate through a drought due to climate change.

“While groundwater is a critical resource during drought there is still potential for recharge in every year of study period. Despite reduced inflows into reservoirs, accumulation of upstream storage is projected to still occur.”

Data on recent drought periods show drought reserves are typically not required until the third year of a multi-year drought, the summary said.

The project was funded jointly by TMWA and the Bureau of Reclamation under the WaterSMART Grant. The project’s report will be submitted to the bureau next month to complete the financial assistance agreement.

Formerly known as Challenge Grants, WaterSMART Grants provide 50/50 cost share funding to water districts or local governments with water or power delivery authority. Projects should seek to conserve and use water more efficiently, increase the use of renewable energy, protect endangered species, or facilitate water markets, according to the Bureau of Reclamation.