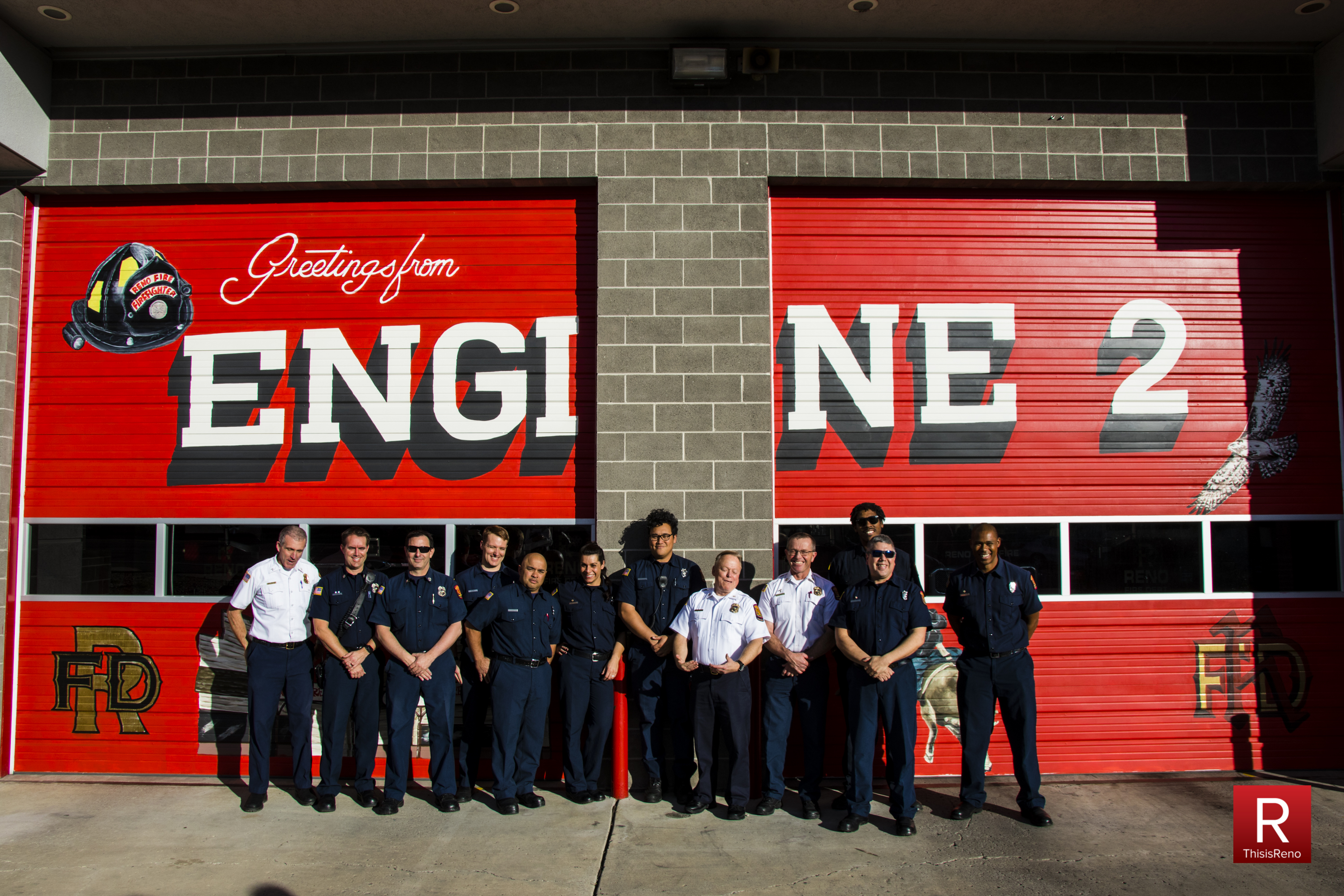 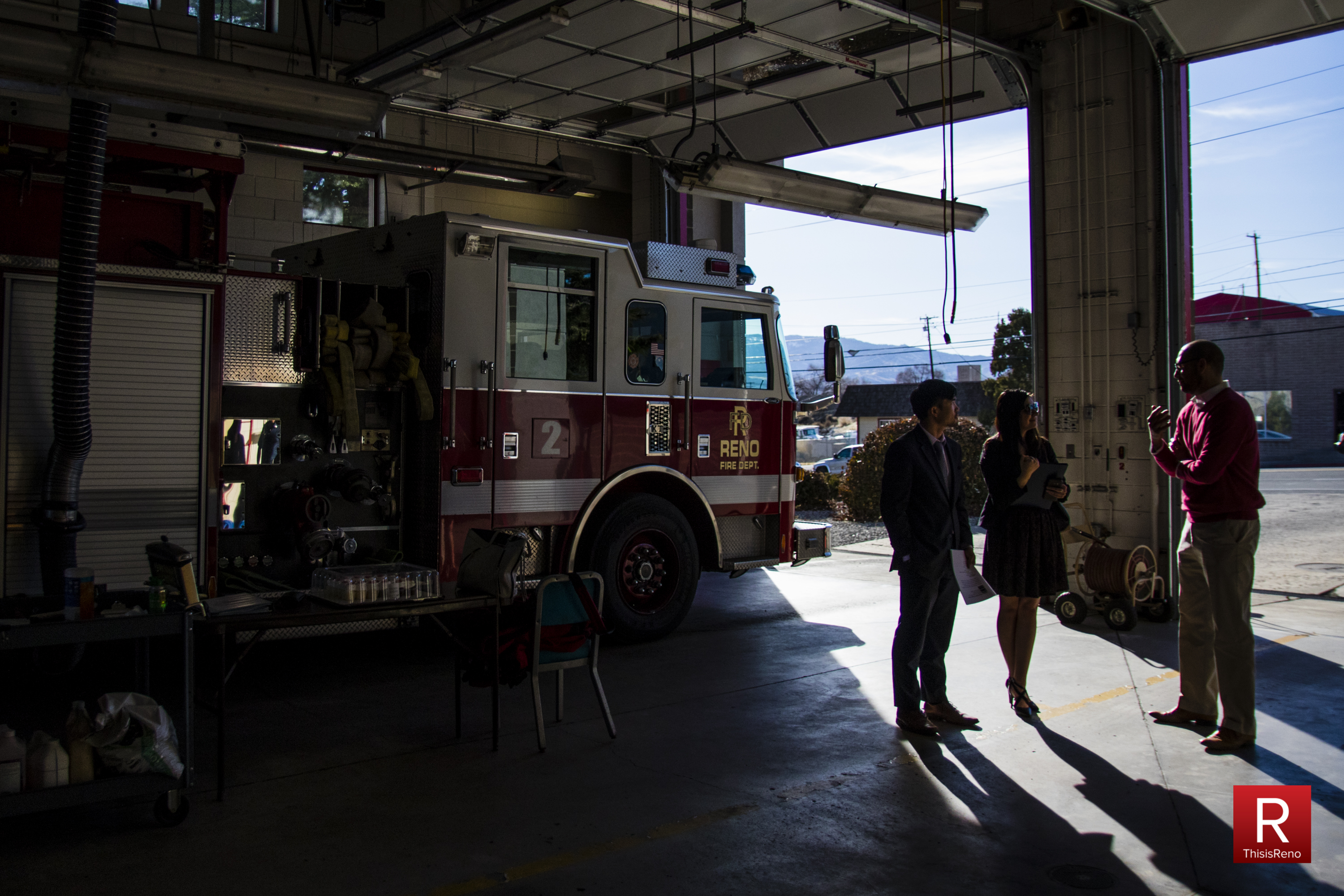 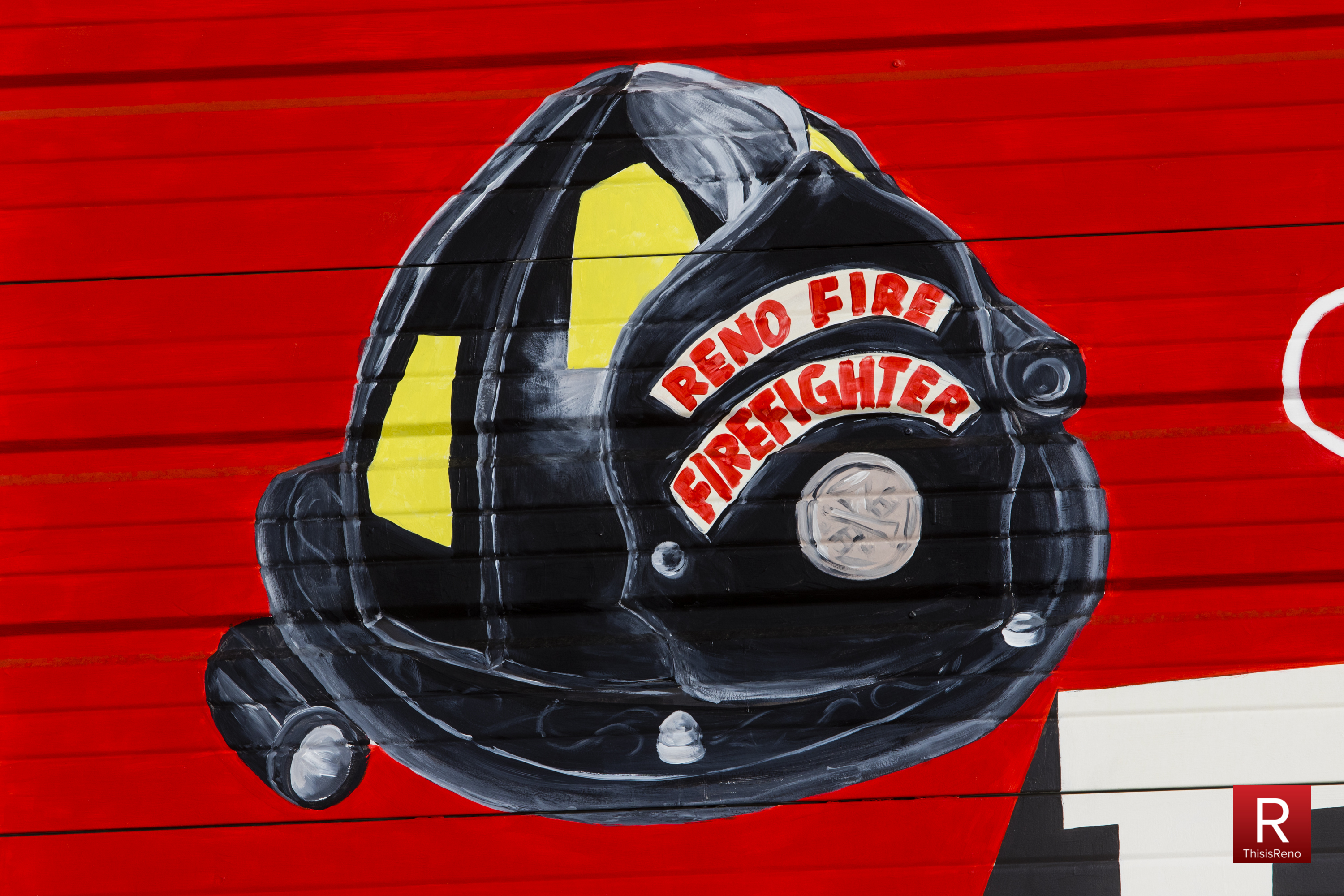 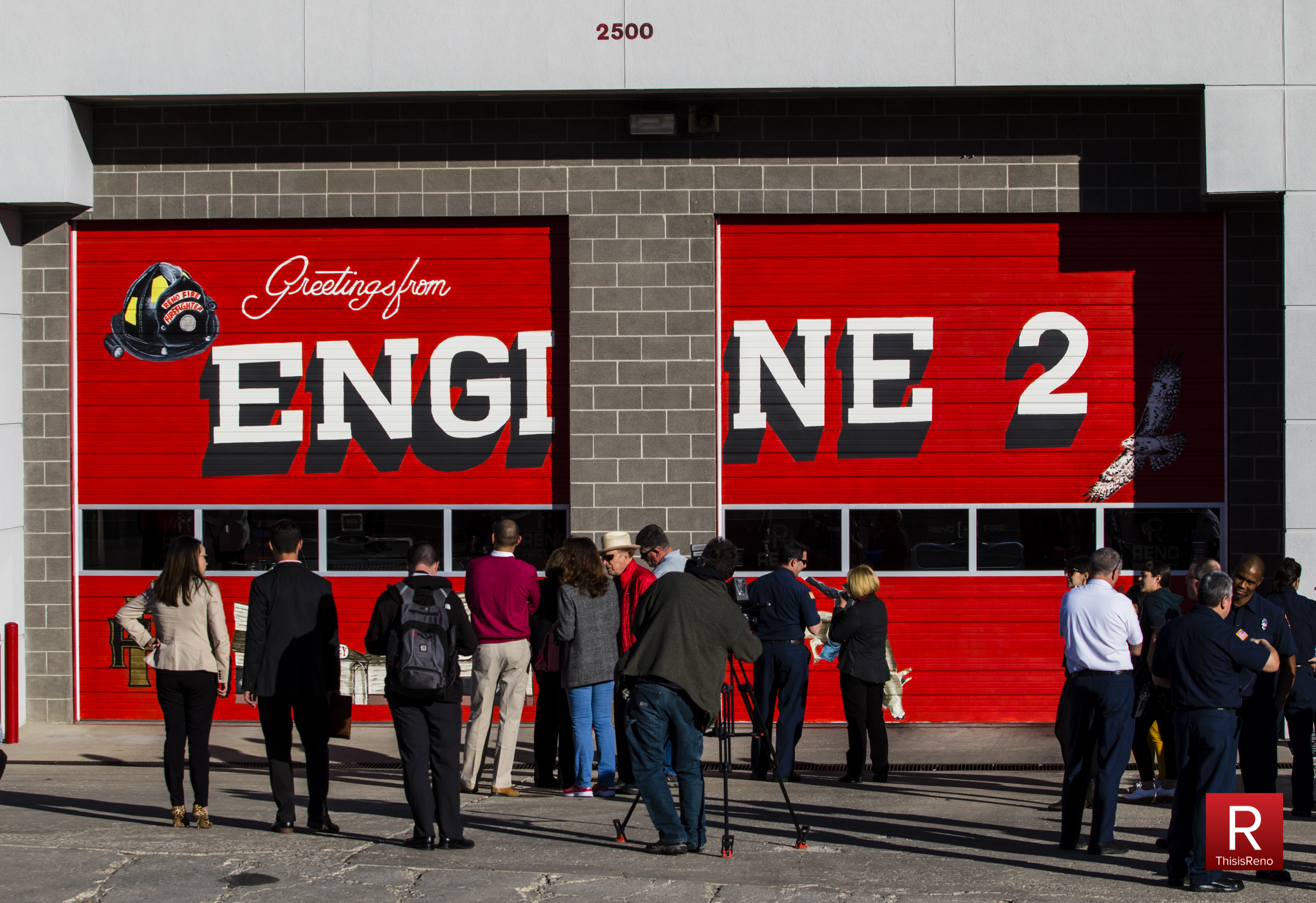 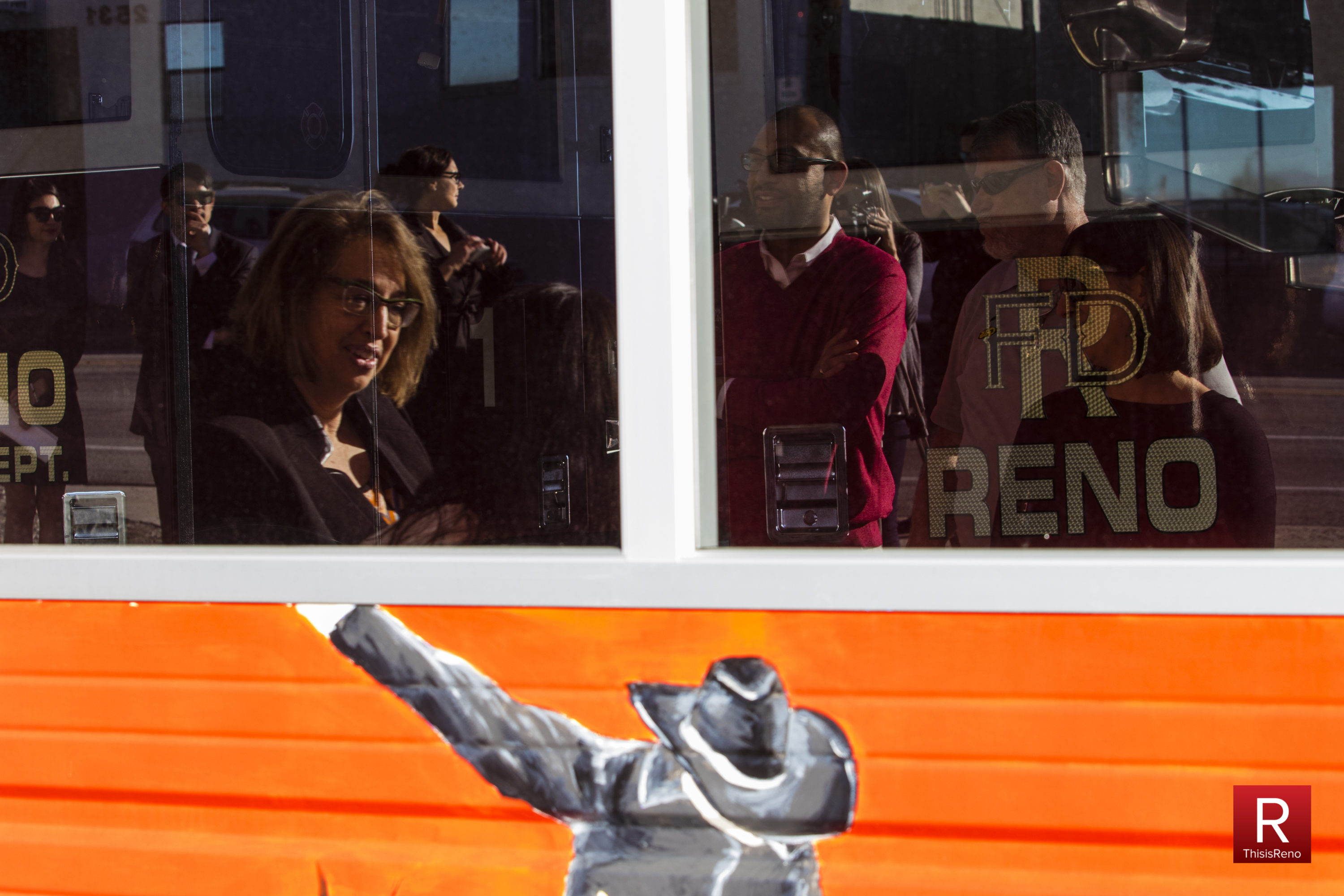 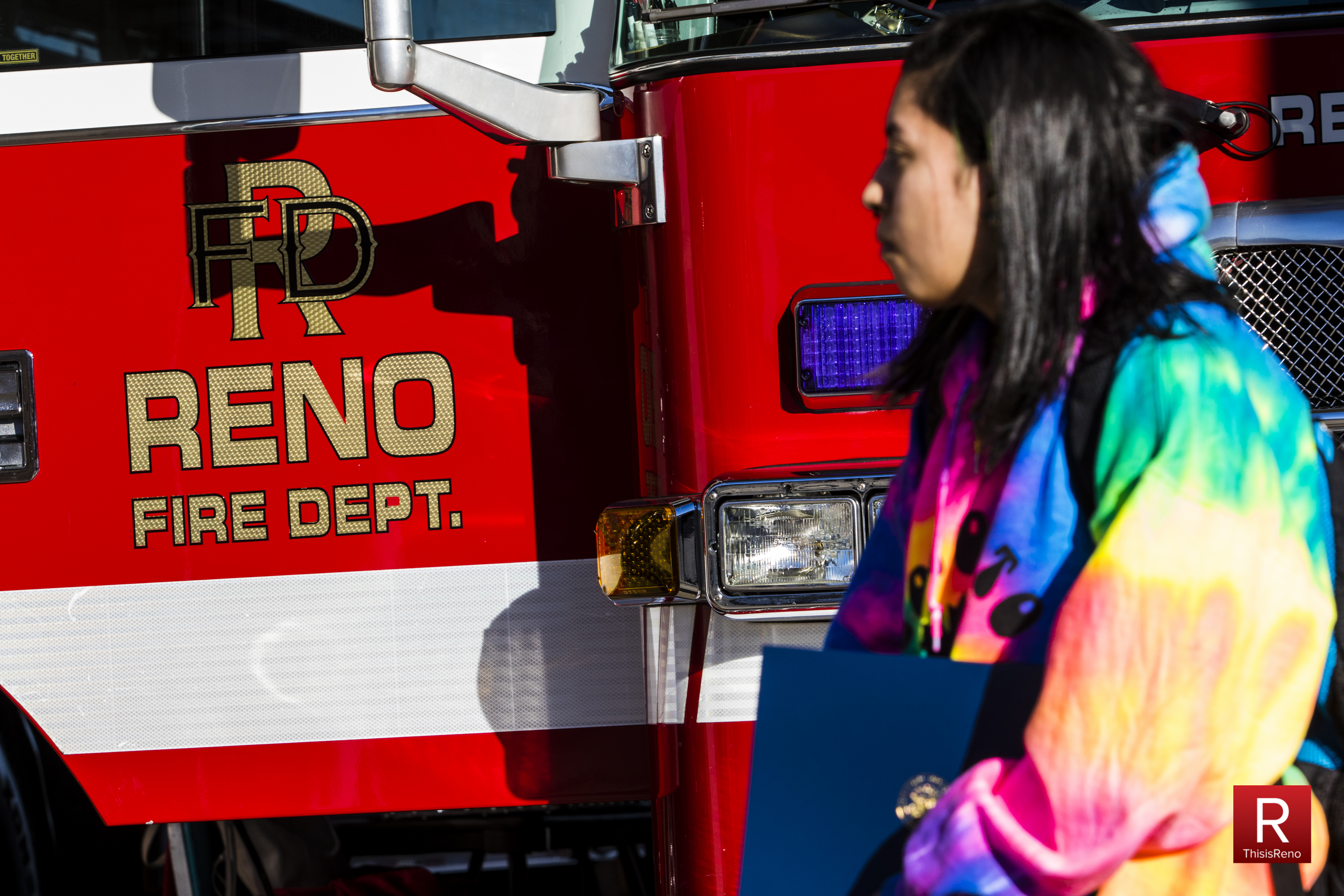 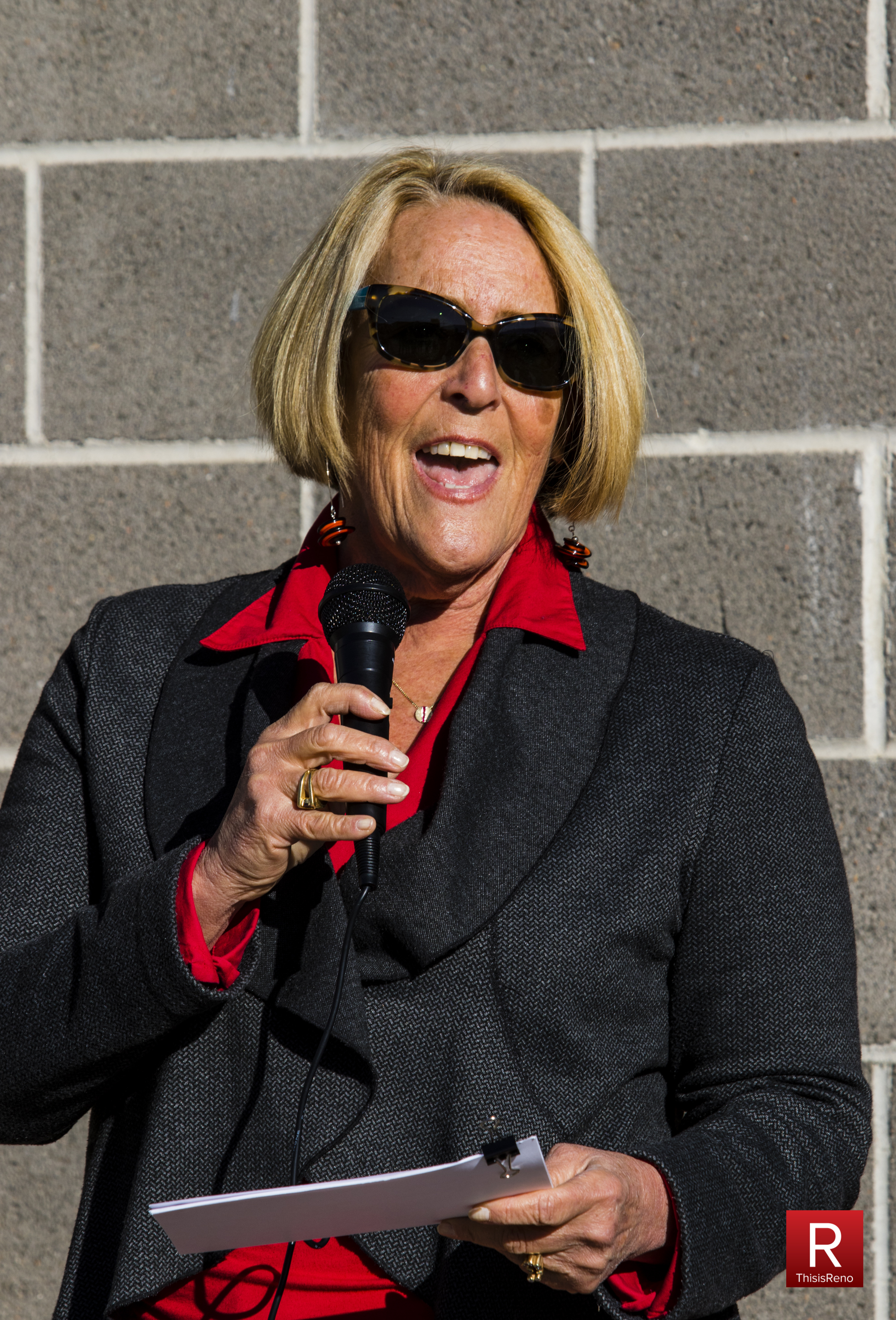 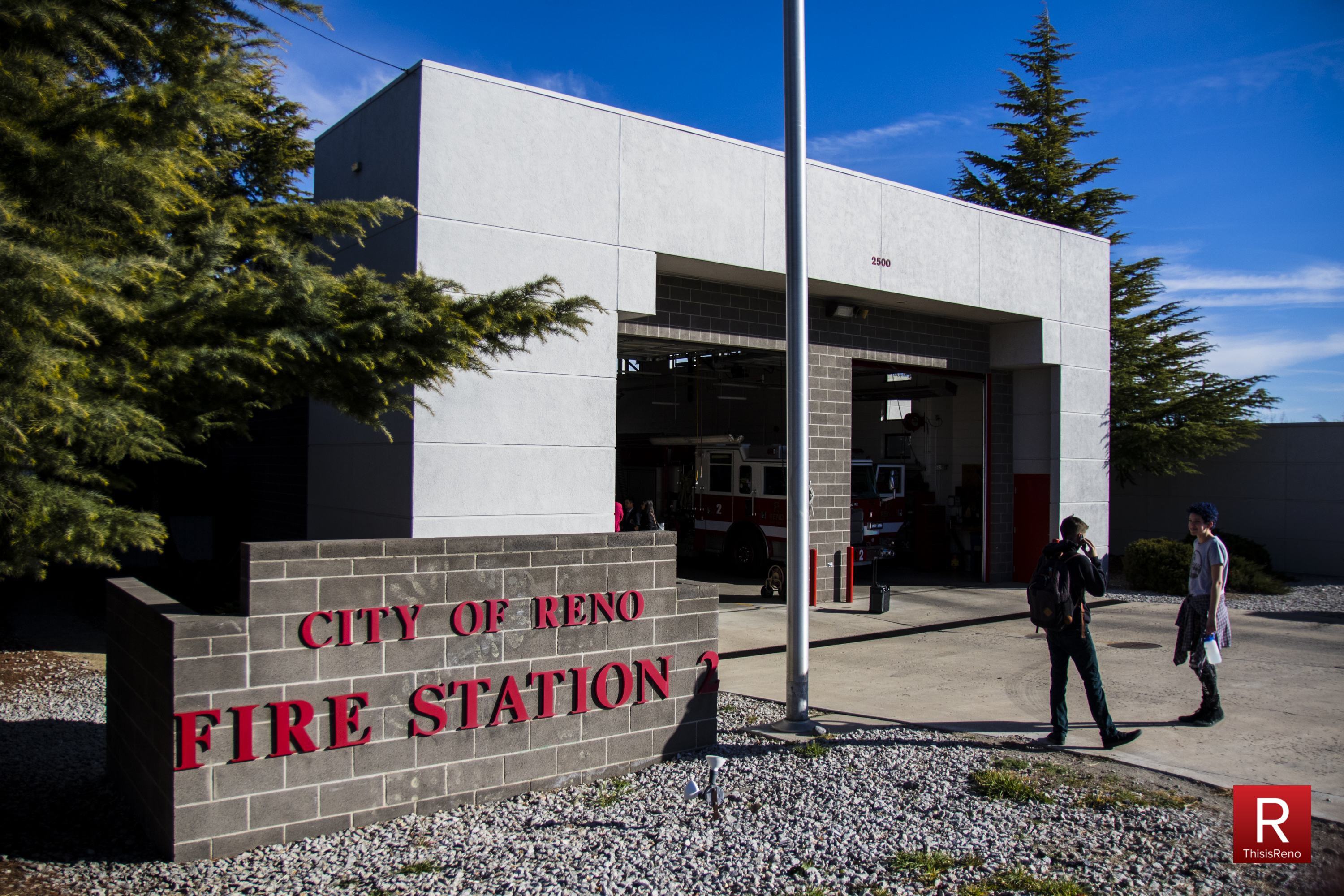 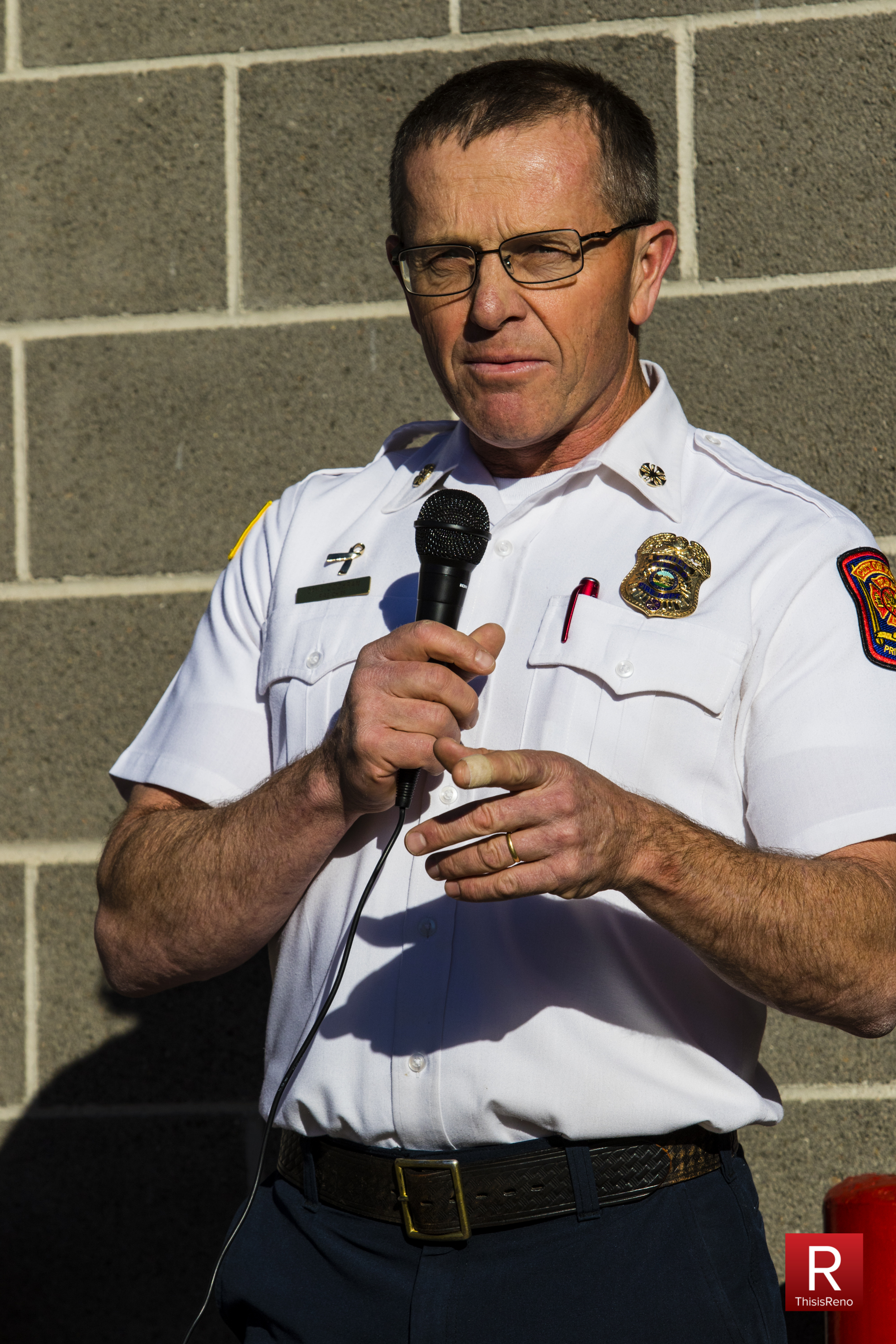 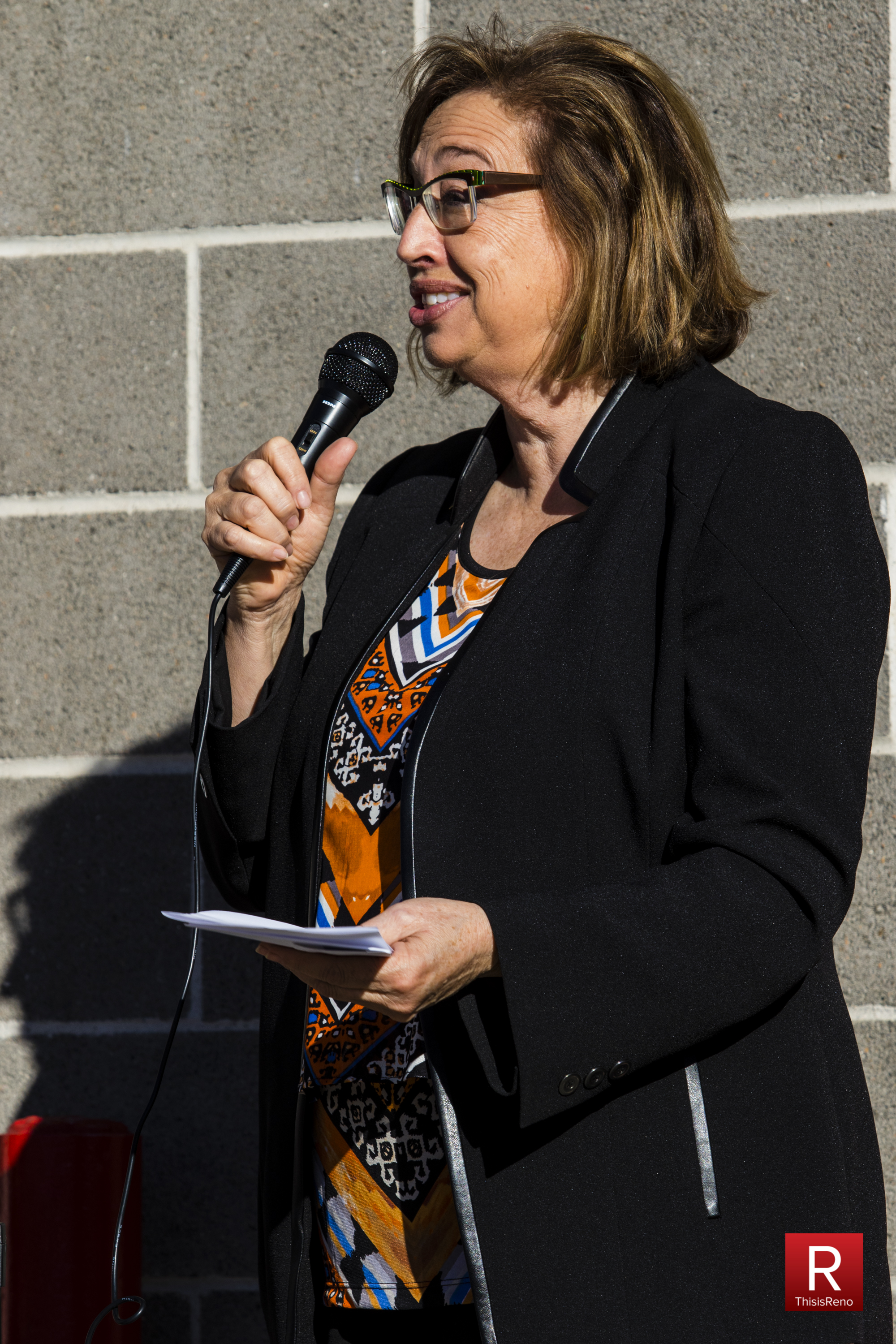 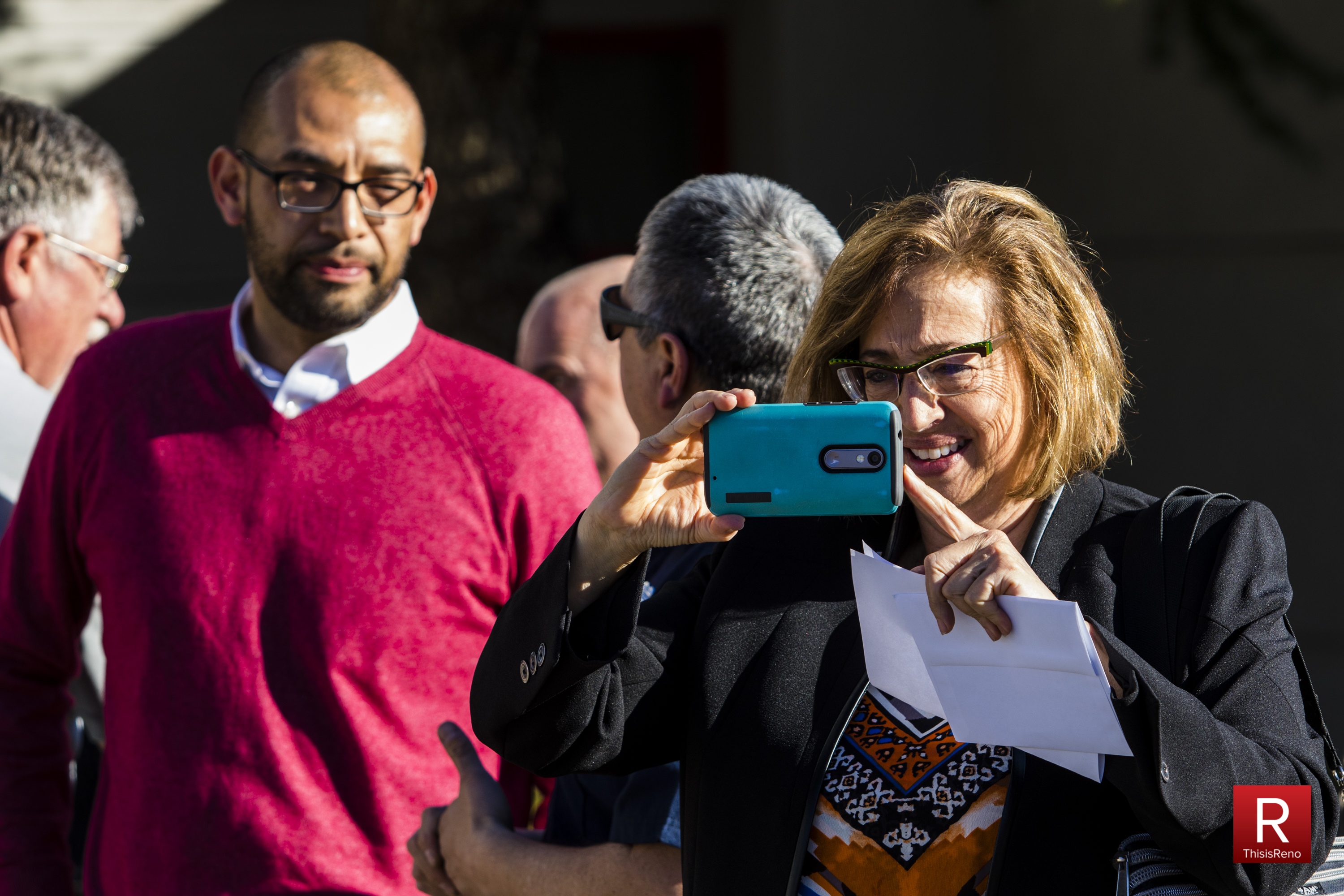 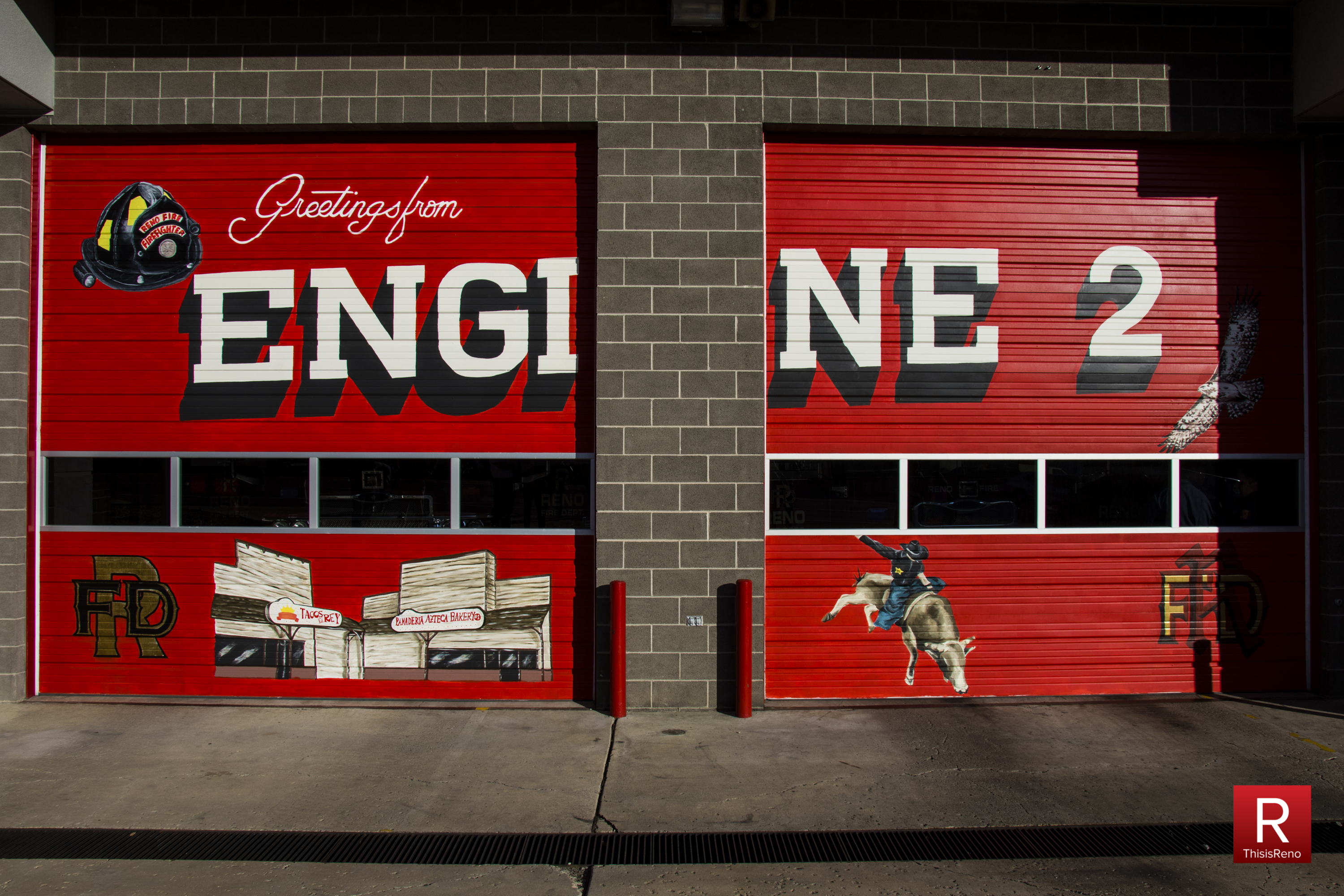 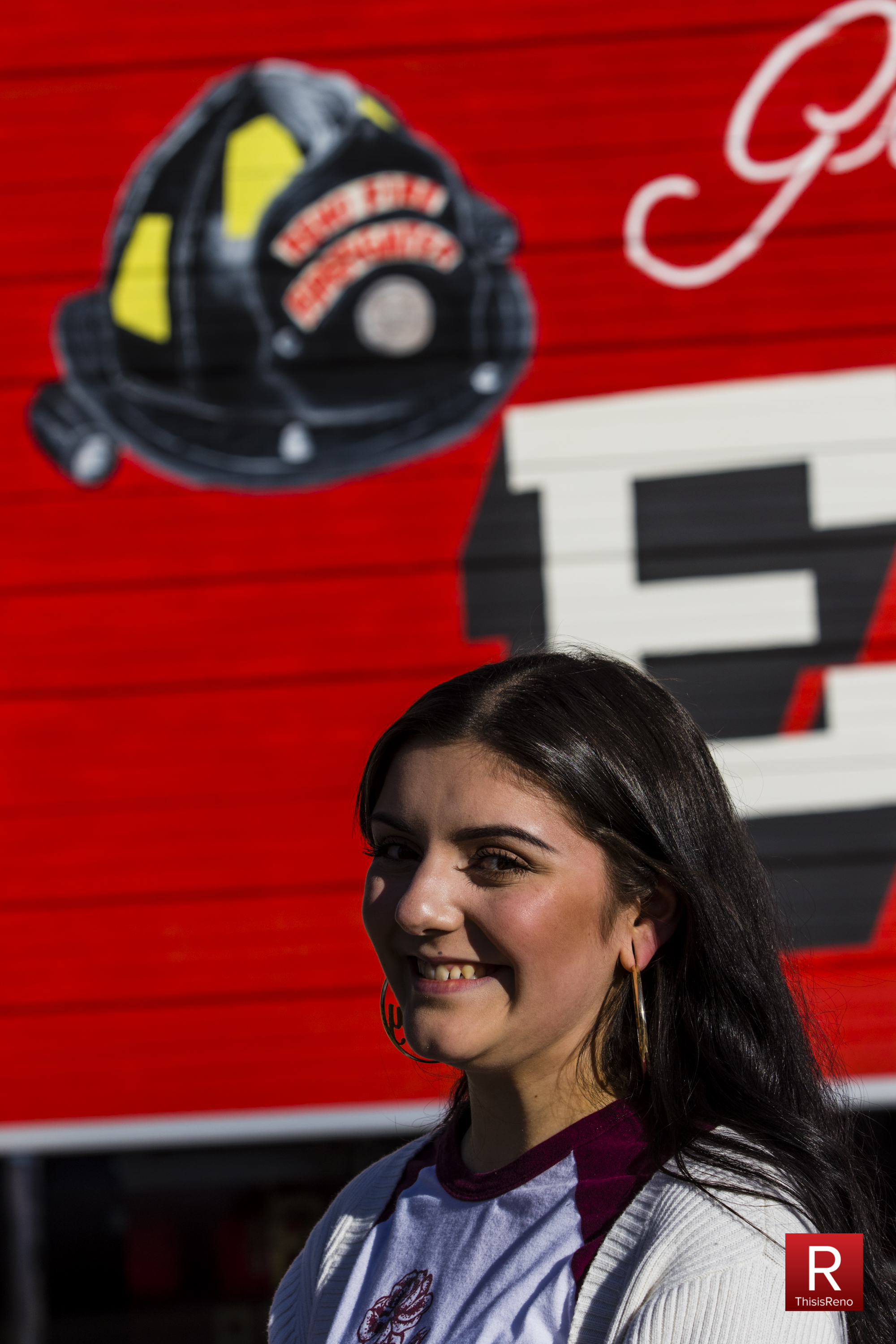 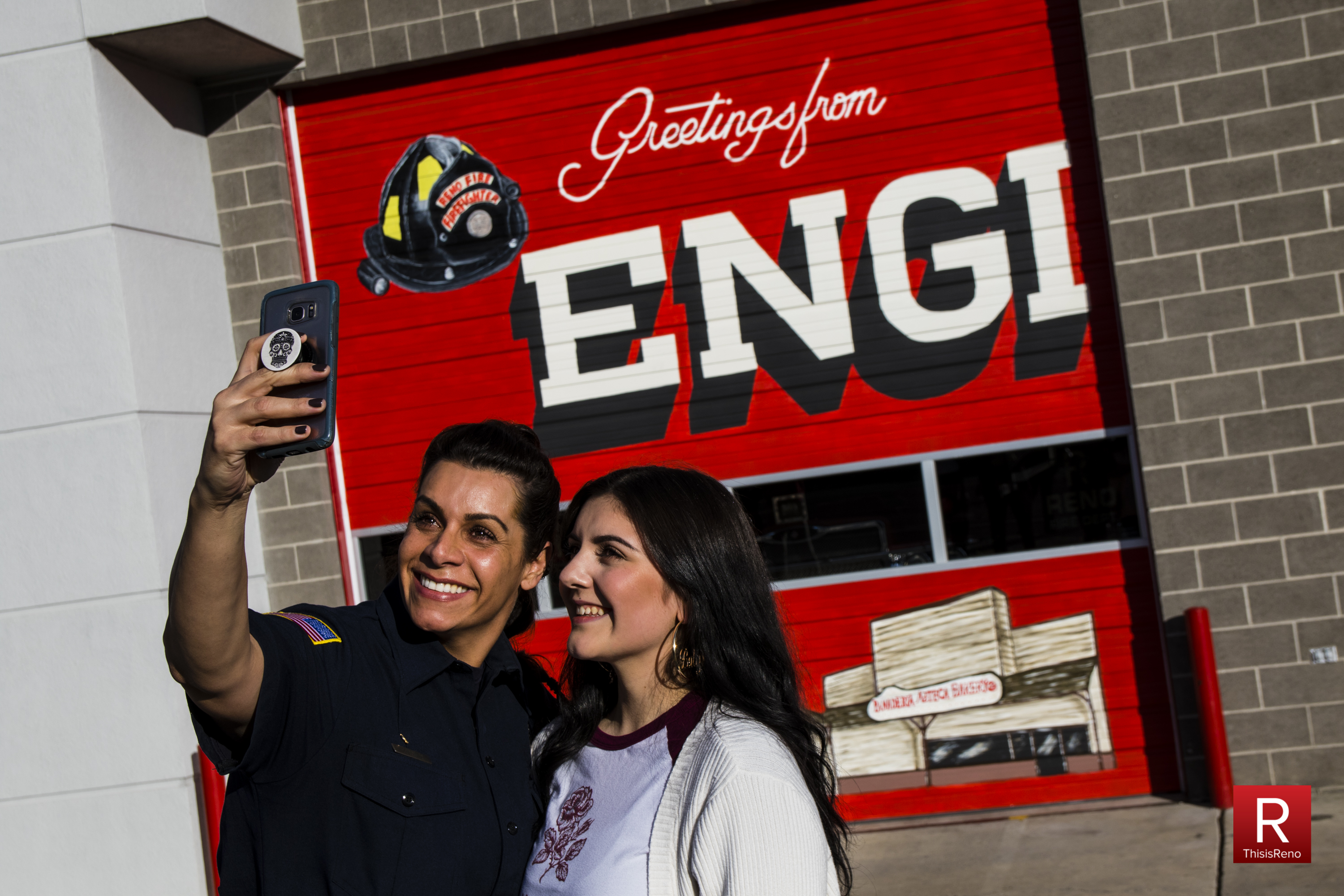 Mural artist Paige Gomez poses for a selfie with a firefighter in front of the new mural at Station 2. Image: Ty O'Neil 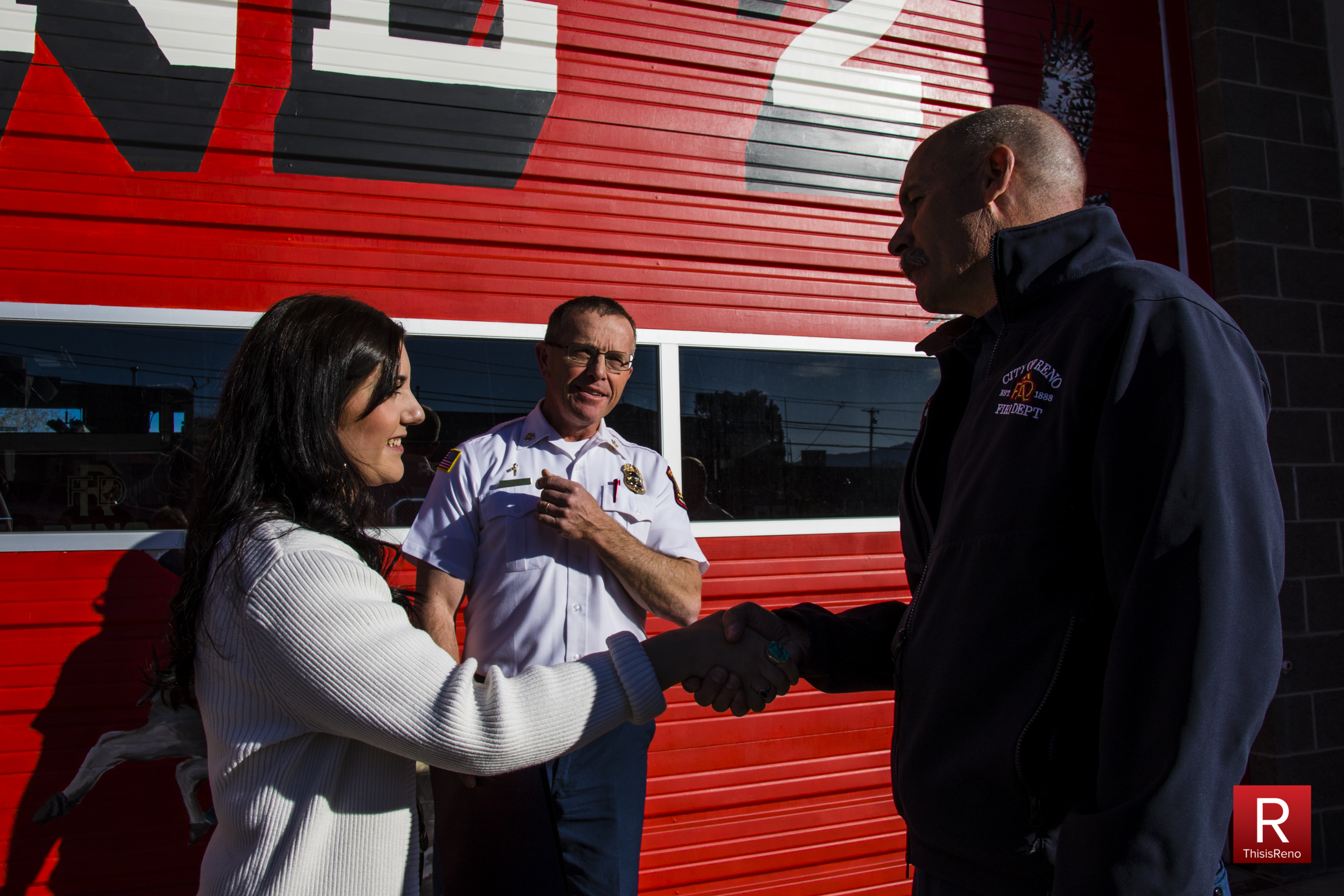 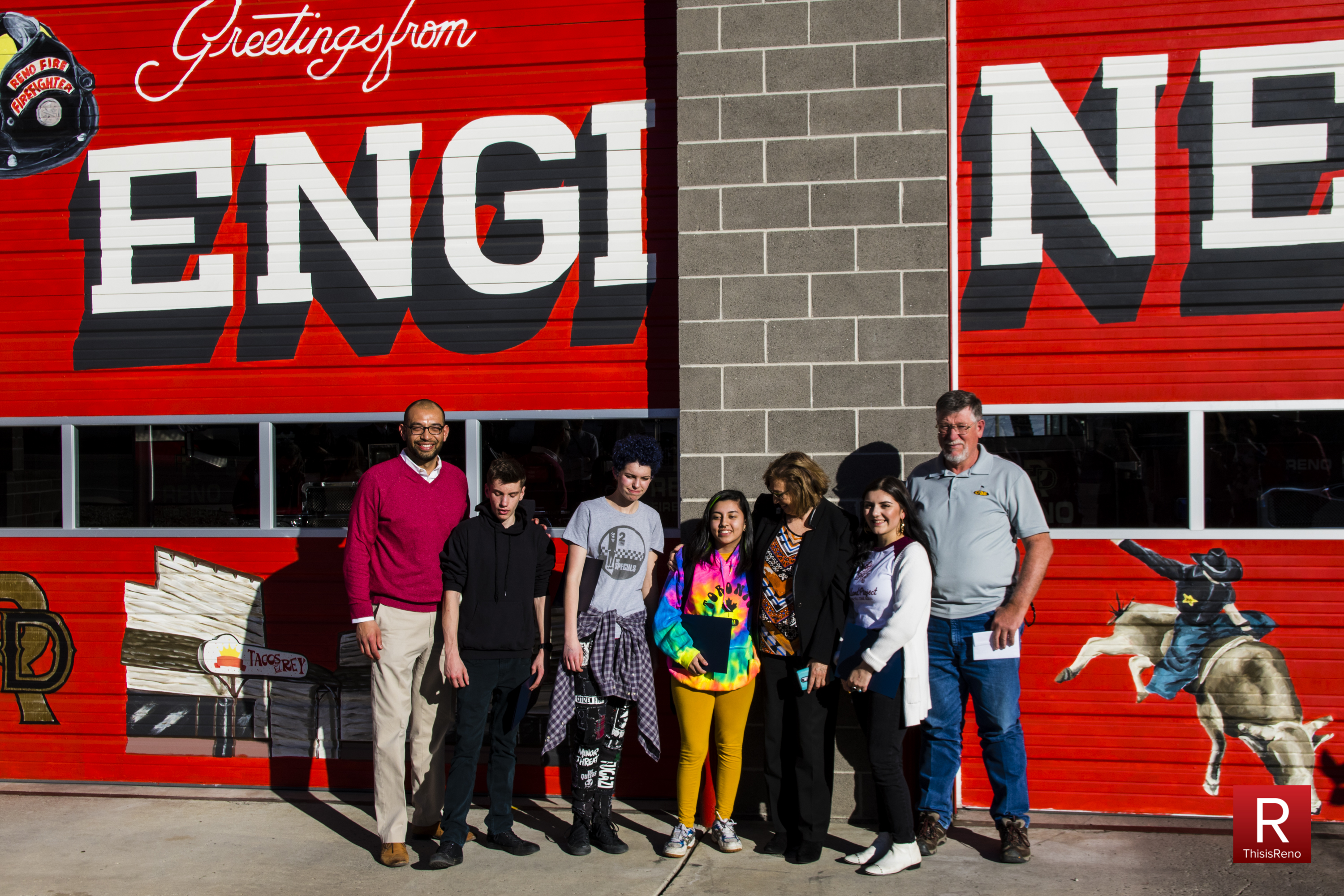 There was a general sense of curiosity as people gathered outside the fire station with no mural in sight. According to city councilmember Naomi Duerr, Reno now has more than 200 murals, meaning most of the those in attendance at the event have been to a mural “unveiling” in the past. Yet as the crowd grew larger, people only grew more curious. It was only the sharp-eyed that noticed a small piece of the mural tucked away on the station’s rolled up bay doors. 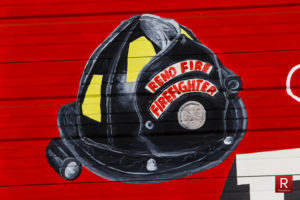 The new mural, which covers the two roll-up bay doors of the station, was commissioned by the Reno Fire Department and City of Reno Arts and Culture Commission and funded by the city’s blight initiative at a cost of $3,500. Local officials that participated in the unveiling included Sharon Honig-Bear of the Reno Arts and Culture Commission, Reno Fire Chief Dave Cochran, and Reno City Councilmembers Naomi Duerr, Paul McKenzie, and Oscar Delgado.

Artist Page Gomez worked with The Holland Project and students from Hug High School who assisted in both painting the mural as well as brainstorming the idea. Additional artist support was lent by Lupe Reyes.

The visual style is taken from that of old postcards but features elements and businesses from the community. I spoke with Zoe Mansfield and Preston Bryant, two students who helped work on the mural. They explained that in the month it took to create the piece they would walk down to the mural after school every day and work on it for three to four hours. Weekends gave them even more time to paint. Mansfield seemed to take a good deal of pride in that the idea of the postcard aesthetic had come from her, and based on the results there is good reason for her to be proud. 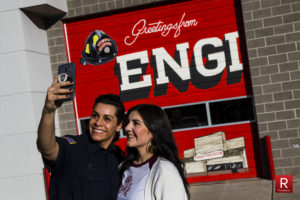 Artist Paige Gomez poses for a selfie in front of the new mural at Station 2. Image: Ty O’Neil

Artist Page Gomez also spoke with me about working on the mural. While she isn’t traditionally a mural painter she was able to consult with mural painters from The Holland Project who helped her with the scale of the project. She completed the final design and worked with the students to adapt the painting to the doors of the fire department.

As the event came to a close it was clear how the firefighters of Station 2 felt about the mural. They gathered around Gomez to shake her hand, complement and thank her. Others took selfies with the artist and set about taking panoramic images of the final piece of art that now adorned their bay doors.

Five events to check out this week: Reno unmasked edition

Five events to check out: Fresh Meat and a little...

Five events to check out: The last week we’ll write...